A few days ago (the 14th) my painter friend Erick sent me a message to let me know that it had been a yearto the day since my last post. He wanted to know what was happening. The realisation that I hadn’t posted for a yearwas just the kick up the arse I needed to make me get the new site finished. As you can see, it worked and I’m back. ThanksErick.

Of course, it would have been much neater if I could have got this post and the new site up on the 15th, but therewere too many little jobs to do to get the new version ready to go and I didn’t quite make it. Let’s just pretendthat it’s exactly a year since the last post, it seems so much more poignant.

So what have I been up to? Drawing and painting mostly. No surprises there. There’s too much work from the past yearfor me to get it all posted now, but what I plan to do is try to pick a representative sample over the coming weeksthat will hopefully give enough of an update to show where I’ve been going and why. Perhaps the best place to start isthe most recent piece I’ve finished, so here it is: 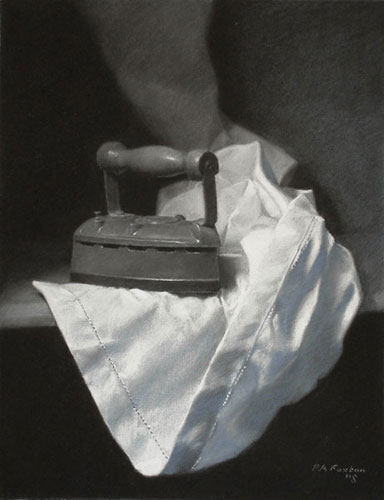 I know what you’re thinking. It’s been a whole year and he’s still doing value studies. Well, I can’t deny it, I’m stilldoing more of that than anything else. But as long as I’m still learning as much as I do from them, the value studies willkeep coming. I think I could happily spend the rest of my life on value studies without ever getting bored, the subject isendless and there’s always something new to learn. But don’t write me off too soon, I have done a painting ortwo as well which I’ll be posting soon.

During the long process of rebuilding the site, I took the opportunity to re-read some of my old posts, especially thefirst few. It’s interesting how much has changed.

A question which has always vexed me since I started on this road is whetheror not it’s possible to teach yourself representational drawing and painting to a high standard without the benefit of anexperienced teacher. There are advantages and disadvantages the autodidact’s road I think. I’ve heard it said, and hadit said to me, that it’s impossible to teach yourself. Whenever I hear that it brings out my stubborn side and I think tomyself ” Oh yeah? Just watch me.” This jaunty self confidence is generally followed directly by a period of crippling doubt.”They’re right, I’ll never do it. What was I thinking?” The truth is that the verdict is still out for me.

Certainly I’ve made plenty of mistakes as I’ve gone along, no doubt I’m still making them and will make many more. Readingmy first few posts, I was a little surprised to see how obsessed I was with colour. I thought colour was everything. Now Iknow it isn’t. If, right at the beginning, I’d concentrated first on drawing, primarily with line, and then on value, I’dundoubtedly be further along than I am now. Such is the benefit of hindsight. Throughout the two and half yearsI’ve been at this so far I’ve often found it necessary to get back to the basic fundamentals and practice them before Icould move on. This, I think, is the main disadvantage with being self taught: The lack of a logically progressingcurriculum.

Another early misconception which gave me a chuckle was my estimated time-scale for retraining. I thought I might need ayear, maybe two at most. Let’s just say that was a touch optimistic. Another disadvantage, related to the one above, is thateverything takes much longer when you have to figure out the path ahead of you before you can start to walk it.

But if I could go back now to when I started in November 2005 and give myself a bit of advice, I think the best thing Icould tell myself is to take it easy. Don’t be in such a rush to forge ahead. Accept that learning to draw and paint properlyis an undertaking requiring years, not months. As some-one very succinctly said recently on a forum I frequent, it’s a marathon,not a sprint. Which brings me neatly back to this drawing.

This one is actually a study for a painting which I’ll be starting shortly. Probably the main thing that’s changed aboutthe way I work now compared to the way I was working when I started, even a year ago when I made my last post, is the amountof time I spend on each piece. In the beginning, I’d often spend just a few hours on a painting, whereas thisdrawing took four days just to lay in the outlines, and over three weeks to finish, putting in fairly substantial hours every day.

Looking back, the gradual process of slowing down has been a recurring theme in a lot of my posts over the last twoand half years, and it’s still continuing. Part of that is due to moving towards more finished pieces now, but I wouldn’t wantto suggest that it’s simply a case of working longer at the end. Each stage of a drawing or painting is takinglonger and longer – as long as it needs to take to get it as right as I can get it. I can’t pretend I don’t feel a certain amount ofpressure to get pieces knocked out more quickly, particularly since I’m effectively full-time at this lark now and haven’treally sold anything yet (have to work on that.) But I’m trying to resist the temptation to rush, not to be happy with’good enough’, to finally learn this most important of lessons. I think it’s much more important to make sure that each pieceis the best that I know how to make it. After all, if it becomes simply a case of knocking out product, I may as well go backto a nine-to-five job. Or painting cartoon murals in motorway service stations. No thanks.

I’ll tell you about the drawing. It was done sight size (seethis post on Bargue drawing for an explanation of the process, orDarren Rousar’s excellent site devoted to sight size,) and with as much concern forthe accuracy of the drawing as I could muster. I often see people on forums talk about how ‘art’ should be about somethingmore than simply copying what you see. Note it’s always ‘simply’ or ‘just’ copying, as if it were easy. I’mgenerally incensed by the suggestion that there’s anything simple about making a convincing translation of what we see ontopaper or canvas. Such people, I notice, are rarely capable of doing it themselves. But I have to say, I agree with the widerpoint. The accuracy I’m talking about is the laying out of the drawing, getting the shapes in the right place. When it cameto the values in this drawing, I hadn’t a hope in hell of ‘just’ copying, since the range of the subject was so far outsidethe range of my materials.

I think a lot of the mood, feeling, atmosphere, whatever you want to call it, of a painting or adrawing can depend on the treatment of the values. Whether high or low key, compressed or full range, down from the lights or upfrom the darks, there are endless possibilities available in the treatment of values, and the choices that the person at the easel makesgo a long way towards determining the overall effect – perhaps also the emotional impact – of the piece. In terms of creating alife-like picture, values are key too. The relationships between them must be well observed, firstly, and then effectively translatedinto the limits imposed by the medium.

This drawing was done in black and white chalk, using a technique of overlaying and mixing that I learned the basics offrom the very wonderful Kate Sammons. The value range of the chalks is really quitelimited, more so than oils for example, so I also heightened the highlights with zinc white gouache. Still, the availablerange was considerably more limited than the range of values in the subject. So I spent a lot of time trying to judgerelationships, checking the lightness or darkness of each section against other parts of the drawing. I’ve tried to createa feeling of depth, and to give the drawing some atmosphere as far as I was able.

Value continues to fascinate me. As much as I find it technically fascinating, from a point of view of the translation ofvalues into a limited range, I also think that treatment of values can be very expressive. I’d like to be able to play valuelike a musical scale, to create effects and the atmosphere I want at will. But I suspect I’m many years from that level offluency yet. In the meantime, I’m pretty happy if the stuff I’m drawing looks at all like the stuff it’s meant to be.

Value is also important from a point of view of composition I think. In this drawing, I’ve tried to use the fullrange of values and contrast I had available to me to create an atmosphere that’s strong and dramatic, but gentle and meditativeat the same time. You can be the judge of whether or not I’ve succeeded.

This old iron I found in an antiques market I was wandering around with Michelle. She looked a little askance at me when I boughtit. It is, after all, just an ugly piece of old tat. But as soon as I saw it on the stall I saw a painting in my head and knewwhat I wanted to do with it. When I’d finished this drawing, she said that she understood now why I wanted to paint it, and thatshe could see the beauty in it now that she hadn’t seen before. I think that’s one of the nicest thingsanyone’s ever said to me.

Oh, and I know the shelf is wonky on the right (thanks Marsha.) I will fix it, I promise.