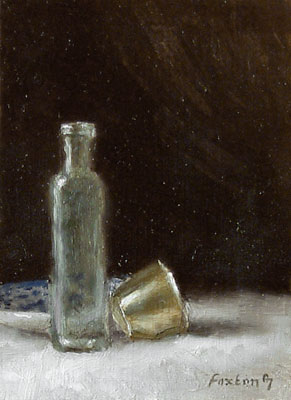 It’s odd to be writing up this little sketch now, since it’s at least two months since I did it. Quite often, if I don’t get a piece of work up pretty soon after it’s done I get bored with it and can’t be bothered to write it up, it’s history.

But I think it’s worth posting because it’s birth was quite interesting. The set up is exactly the same as the Wedgwood saucer, and in fact it was started at the same time. Only the viewpoint is different, which obviously makes for a very different composition. But this little painting started as an experiment with a new medium.

Back when I was painting the Wedgwood saucer I was just starting to mess about with mediums again, after a period of restricting myself to a 50/50 mix of pure gum turpentine and linseed oil to keep things simple. That painting was my first play with professionally made (as oppose to home made) Maroger. This one was started as an experiment with a glazing medium.

I don’t know everything that’s in this medium, but I do know that it’s got Canada balsam in it, which is good for soft, fused edges, and smells wonderful. In fact, even if the medium was horrible it would be worth using for the smell alone.

Just as well it isn’t. In fact, it’s a very nice medium. Possibly my favourite of the ones I’ve tried so far.

This medium is intended to be used in the final stages of a painting, so this little sketch was done in fairly neutral greys to start with. I know you’re supposed to call it a ‘grisaille’, but I’m not French and I can’t use that word without feeling like I’m being pretentious. Plus I don’t know how to pronounce it, our French cousins do funny things with their ‘l’s.

So as far as I’m concerned, I painted this grey.

All the colour was added weeks later with the glaze medium. Generally speaking, when people talk about glazing with oils, they’re talking about painting with thin translucent layers of colour, thin as washes.

But in fact, that’s not glazing at all. C’est ne glazing pas. It’s veiling. Glazing is something rather different.

Proper glazing, as the old masters (maîtres vieux) used to do it, was done with full strength paint. Victor,the resident medium genius at Rob Howard’s Studio in Haverhill, was kind enough to show me exactly how it’s supposed to be used, and he should know because he makes it.

Firstly the area to be painted is covered with a thin layer of the medium. This is a couch, just like you use with Maroger. You then rub the layer of medium hard with the palm of your hand, to make sure the layer is good and thin.

The next stage, and this is the part that might surprise you, is to take neat paint, straight from the tube, and cover the whole area with it.

Sacre bleu! Quelle Horreur! The painting is ruined! But wait – once the painting has been obliterated, you start taking the paint back off again. Using a brush, your fingers, a rag, whatever you like, you start to remove the paint, revealing the grey underpainting underneath.

After a fair bit of working this way, enough of the grey underpainting is revealed to bring the objects back into the painting, but now coloured with whatever coleur it was vous covered it with. Some areas will be almost entirely free of paint, some will have just a thin translucent layer, and some will have opaque paint completely covering the grisai…sorry, grey underpainting.

This gives the painting a depth and a variety of surface that painting opaquely doesn’t give you. It also makes the colour somewhat warmer, since translucent colour always looks warmer than opaque paint mixed with white to get the same value. I don’t know how much it shows on the photos, but this little sketch has considerably more depth and warmth than it’s sister painting when seen in the flesh. In fact, I prefer this one to the other one.

One of the reasons that I’m so surprised by that is that when I came to glaze this picture, I no longer had the set up in front of me.

I made the colour up. The background, for instance, was much lighter originally. But I liked the effect of the deep brown against the blues, so that’s what it became. It was an odd experience for me, since I’m usually so concerned with painting what I see as accurately as I can.

But finishing the painting without the objects there to work from was kind of liberating. It meant that I could concentrate much more on the painting itself and seemed to make iteasier to experiment with the mood I was creating by varying the tones and colours.

How much I’ll be doing this I don’t know, but it made me think.

A little while ago I reached the conclusion that a drawing or a painting should have it’s own set of rules regarding tonal balance, and that it’s fine, in fact in many cases it’s necessary, to move away from what I see in order to create a more convincing feeling of light.

The piece of work has it’s own logic. It’s a translation. Bargue does this in his drawings from casts form the Bargue book. It’s the process of selection which makes a painting or a drawing individual. Without it, you end up with photo realism, and we all know how boring that is, right kids?

I am interested in creating a mood, an atmosphere in my paintings, to communicate some kind of feeling. But I also get hung up on appearances, sometimes to the detriment of the painting I think.

Finishing this one ‘blind’ did open up some possibilities for what might be a very different way of working. I do see a danger in that too much of this could eventually move the work further from the natural world of appearances than I want it to go, but I do think that it will interesting to follow it up further.

Undoubtedly I found it easy to do with this sketch because I’ve painted all these objects before. The christening cup I’ve done five or six times now. It would be an interesting experiment to do a bunch of preparatory drawings, lay out an underpainting in grey, and then finish it from memory. I must try that at some point.

What I must also do is get these paintings posted and written up as I do them, since there’s still four others to post. I’ll get to them soon hopefully. Je suis désolé.