Although I was feeling a bit dissatisfied with today’s trip, (I only managed three drawings) nowI’m home and looking over what I did I’m fairly pleased.

It was very quiet in the cafe today, I must remember that Wednesday is a quiet day, much better to do a mid-weektrip on a Thursday since it’s market day and the cafe will be busier. Despite that, the three drawings I did do haveturned out ok. I’m placing them on the page better now, no squishing up the drawing to get it to fit because I startedtoo far over to one side. Also none of the drawings from today have that hesitant, hairy line quality I usually get when I’mwarning up.

I’m starting to get into routine for how I put these drawings together. Firstly, I wait for a good subject. I’m slowlygetting better at this. It’s a good idea to give someone a while to settle when they first get their coffee andsit down. People tend to move around a lot at first, then settle down and move less once they get into reading orchatting. Once I’ve decided to start adrawing, I begin first with the body, laying in the coat or whatever it is they’re wearing. I’ve found it helps tokeep in mind where I want the head to end up, then pick the strongest line of the body (often the collar, or maybe theline formed by the edge of an arm,) and place that line in relation to where I want the head to end up.

I’ve noticed that I’m starting to visualise the drawing on the page now before I start. This has come aboutwithout me thinking about it, and I suppose is one of the benefits of practice. 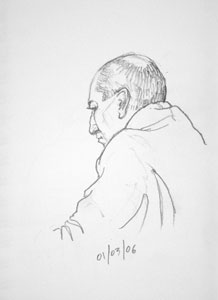 I must admit I surprised myself with this one. The first drawing of the day is usually the worst, today’s I thinkis the best, and one of my favourites so far.

This one was a classic case of patience paying off. I could see thathe had a distinctive, strong face which would be nice to draw, and I spent a long time just looking at him veryclosely, trying to get a picture in my mind of how the shapes of his face fitted together.

I had a better angle to draw him from when he first sat down, and could see more of his face, but he was busyguzzling a muffin and hadn’t settled yet so I decided to bide my time. Eventually he did settle down, and althoughhe still moved around a fair bit after that, he kept coming back to the same position pretty much, reading his copy ofthe Daily Mail.

Fixing his face in my mind before I started made a difference when I came to draw him I think. After getting hisshoulder and collar in, the face came together very quickly with only a few corrections on the shape of his head. I’mstill not sure I should have worked into his hair that much, but I wanted to get his bald spot. The likeness I wouldsay is quite good in this drawing. 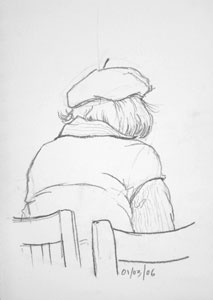 Second drawing from today. I would have loved to have been able to paint a portrait of this girl, she was verydistinctive, dressed mostly in black with that cute black beret, and ginger-auburn hair. Something about herintrigued me, she seemed like a very interesting person.

I have mixed feelings about the drawing. It looks better to me now than it did when I’d just finished it, but I wasfrustrated because I really wanted to get some of her face showing. Unfortunately it wasn’t to be.

Although overallit’s come out ok, I don’t like the lines describing the horizontal folds of her jumper across her back. I think shemust have been bent further over her book when I put them in than when I started, since they don’t gel with thedirection of her shoulders and so don’t really help to describe the form of her back. This one is the one that gotaway, hopefully I’ll get a chance to draw her again at some point if she’s a regular. 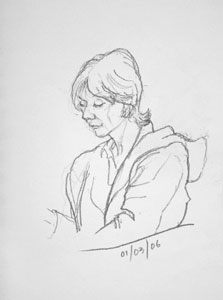 Third and last drawing for today. This is another one I was unhappy with at the time, but looks better to menow. I struggled with placing her shoulders and arms in relation to her neck and head, which shows I think, and wasthe source of some frustration whilst I was drawing. Her arms were drawn with her in different positions and don’twork together very well and her neck came out a shade too long.

The likeness in this one is not good. It has some resemblance, I got the thin-ness of her neck and face, but thefeatures aren’t as well observed as they might be. Perhaps if I’d spent more time just looking before I started to draw,as I did with the first drawing, this one would have been a better likeness.

Although I only produced half the usual of number of drawings today, I didn’t produce any really bad onesso it was a success overall. I’m getting more concerned about whether I’m getting a likeness or not now, which is agood thing and perhaps a sign that the drawings are getting a bit better and I’m having to worry less about the basics.

My approach to the drawings is starting to become more consistent, a sign that the practice is paying off. I thinkthat what I’m learning with these drawings will be useful when I do come to doing more controlled portrait drawings.I’m getting better at simplifying forms, and leaving out unnecessary elements.

I think the drawings have more life in them now than when Istarted last month, and are betterobserved. I feelless rushed now when I’m drawing. Although these drawings have to be done fairly quickly, for obvious reasons,it’s a mistake to rush them. Its still possible to take your time and make sure that you seeproperly before starting to draw. In fact I think that’s what makes the difference between a good and a bad drawing.