This trip did not go well. At the time I was at a loss to explain why.

Last week’s trip did go well,I enjoyed myself and got some reasonable drawings out of it. This trip hit my confidence in a bad way.

The problem was that I was rushing, the 20th Century disease. I had someone coming to see me at twelve, so Ihad to get back homein good time. I was watching the clock the whole time to make sure I didn’t run over, and I think that because ofthat I never really got settled, didn’t get into the zone.

This week’s revelation is that if I want to see properly, then I need to be calm. I need to slow down tothe point where my eye has time to take things in properly, and my brain has time to process the information.If I rush when I’m looking, if I just look instead of seeing, my brain makes up forwhat I didn’t see by inventing stuff to fill the gaps. When I’m drawing, I don’t draw what I see, I draw whatmy brain thinks is probably there, which is never what’s really there. Our brains are visually very lazy, and haveto be kickedand punched into processing visual information fully, seeing properly instead of just glancing. 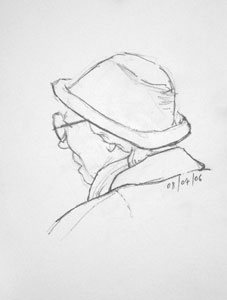 This was the first drawing, done pretty soon after I sat down. Usually I sit and get into my coffee and roll-up fora while, gaze out the window a bit and leaf through last week’s drawings before I start. But today I knew there wasn’ta lot of time, so I got straight down to it.

The drawing didn’t come out too bad comparatively speaking, the first drawing is usually just a warm up andthe weakest one of the day on most of these trips. Today, even though it’s not great, it’s the best one of the day.

This woman was sitting just a couple of tables away, I liked her. Her mouth, although she didn’t have a lot ofcontrol over it, like old people don’t sometimes, was always smiling, at least a bit. When she looked at her friendsas they were talking to her, she smiled at them. I thought that was nice, so I drew her.

The drawing would have been better if I could have got the shape of her hat right I think. The profile of herface didn’t come out too bad. But I had to rush the hat in at the end, and make some of it up from memory, becauseshe left before I could properly finish the drawing. Shame. I do think that my visual memory is getting betteroverall, and I quite often spend a bit of time wrapping up a drawing now after the person I’m drawing has got up andleft. Sometimes it works out, sometimes it doesn’t. On this drawing it didn’t. 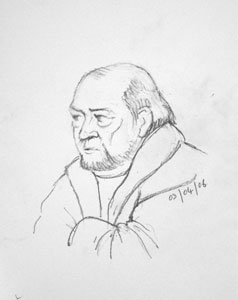 I really fought with this drawing, it was a struggle and it shows.

There’s really not much to say about this one, everything went wrong. The proportions were really out rightfrom the start, I kept having to redraw the shape of his head. The eyes I really struggled with. I remember thinking,”how can I get the right marks to get his eyes in quickly? Maybe just a diagonal line down from his eyebrow willdo it.” Visual jargon. I should have been thinking, “let’s have a good look at his eye, what shape is it? what’s standing out,what can I see?” I didn’t, and the drawing suffered. I can’t remember how many times I had to redraw his eyes,over and over, I spent far too long on it.

The funny thing is, I drew this guy last week, the quiet man reading his paper, and it’s one of may favouritedrawings so far. This day, same place, same subject, same me, rubbish drawing. 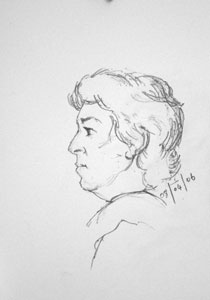 Last drawing, this one was a struggle too, only less so.

I looked at this woman for a while before beginning the drawing. Again, I dew her because I liked her. Therewas something familiar about her, although I’ve never seen her before, but she reminded me of someone, maybe someonefrom my childhood. I responded to her for some reason, she was happy looking and relaxed, very chatty and lively.

This drawing isn’t actually as bad as I thought at first. It’s not one of the better ones, but it has one savinggrace: it does capture something about her. Increasingly I’m thinking that that’s the most important thing about thesedrawings for me. Although I started drawing in the cafe to practice my observation, my speed and accuracy, I findI’m caring more about whether the drawing is a likeness or not.

Actually, it’s not really about likeness in the classic sense. I’m beginning to think that you can catch somethingabout someone even if the likeness isn’t strong just in terms of the shape of the face etc. It has to be close, but itdoesn’t have to be exact for that little bit if the person’s essence to creep into the drawing.

My barometer ofwhether I get that in a drawing or not is whether looking at the drawing a few days later brings the person backclearly into my mind’s eye. I look at this drawing, and I can see the woman clearly, remember her in all the differentpositions she was sitting in as I drew her, the way she angled her head when she was listening. So although I’mnot all that pleased with this drawing, it does have that little something that makes me feel good, it has a connectionwith the person.

I came back very grumpy from this trip, knowing I hadn’t done any good drawings and deeply disappointed after I’dcome home on such a high the week before. But I’ve said it many times on this site already and it bears saying again,in drawing as in life we learn much more from our mistakes than we do from our successes, it just takes a littlewhile for what we’ve learned to sink in sometimes.

What I learned from this trip is the full importance of slowing down, of taking the time to see properly. I think it’sso important that I’ve given it a name,seeing pace, which might sound a bit grandand everything since all I’m really talking about is concentrating harder, but I think that by giving it a nameand making an issue of it, I’m less likely to forget it.