Back to my regular weekly trips to the cafe now.

Taking June off from these sketches certainlyseems to have helped, sometimes you need to get away from something for a bit so that youcan reassess how you approach it, then come back with fresh eyes.

I find I am approaching thesesketches a bit differently now, more relaxed, and that always makesfor better work. I’ve reduced the amount of the figure I try to get into a single drawing, justdoing head and shoulders now. It gives me a bit more time to rough out the main shapes first,then add the details of the drawing as (and if) I have time to do them.

At first I didn’t think today was going to go well, in terms of the number of the drawings. Noone seemed to want to sit still today. So I stayed a bit longer than usual and waited untilI could get some good subjects. Thankfully I was rewarded by a couple of decent ones towardsthe end of the trip. People in the cafe are never, or very rarely, stationary, but some peoplemove more than others. I was lucky to get a couple today that, although they moved around a bit andwere chatting, their bodies stayed in something like the same positions for long enough to allowme to relate the main shapes.

Previously I would work up these drawings by starting from a distinctive line, say the collar,and let my pencil kind of crawl around the drawing from there. Now I do them much more like a Barguedrawing – establish the highest, lowest, furthest left and furthest right points of the head, thengradually refine the overall shapes before I think about the features. It means I can get thedrawings done quicker, but without feeling too rushed.

It may be that something in particular attracts me to drawing someone, their hair, their eyes or theshape of their profile maybe. But I’m finding that by disciplining myself and making sure I ignore thosethings until I’ve got the main shapes somewhere near, I’m getting better proportioned drawings, whichalso seem to be better likenesses. When I finally get to doing portraits, I plan to approach themin the same way. 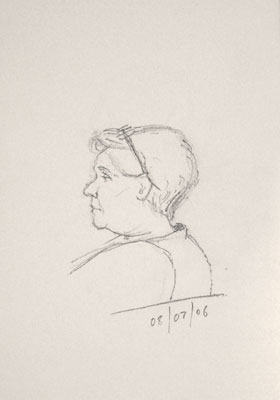 This one didn’t come out so bad for a first drawing of the day. Right from the off, I decided toconcentrate on shapes, not features, working from the general to the specific. First points to goin were the back of her head, the top where the glasses cross the top of her head, the vertical positionof her collar in relation to those, and a quick note for the front of her profile. With the main pointsin, I started to join the dots, laying in only the main lines and angles lightly, until I was happy thatI had the overall shape of her head pretty close.

I was just starting to introduce some of the details, her ear, the line of her glasses, her hairline down to her ear, gradually refining as I went. So far so good. Then she got up and left. Bugger.That happens a lot with these drawings. It’s a good idea to pick people who’ve just sat down, thenyou know that at least you’ll have fifteen minutes or so to decide whether to draw them or not,and to get at least some way through the drawing.

Since I already had the main shapes, I finished the drawing from memory. Of course it looksless like her because of that, but not too far off, and overall it works better than some of theprevious ones, purely and simply because I made sure I had the proportions right first. 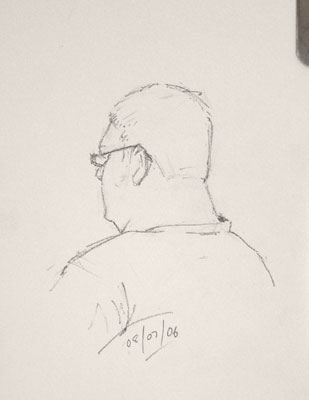 This sitter was most inconsiderate, he couldn’t sit still for an instant it seemed.I thought I was on to a winner with him when he got his Financial Times out and started reading. Ah,good, a heavy duty newspaper that will require some concentration. No such luck. I hadn’t noticed thathe had his little boy with him, who was most excitable, as kids are, and kept interrupting his Dad from hisperusal of stocks and shares. Every time he spoke to his son he put down his paper and leaned over to him,rarely getting back into the same position.

I went on with the drawing anyway. One thing I noticed today is that you can often still get thingsin pretty much the right vertical relationship to each other, like say the ear to the collar, even when theperson is jigging about like a jack in the box. Horizontal measurements are less easy, and require aview of the head from pretty much the same angle as you started it from. So it’s this guy’s ownfault that I made him look even more bull-necked than he really was. Sorry my friend, but that’s the priceyou pay for not sitting still. Not to worry, on to the next one. 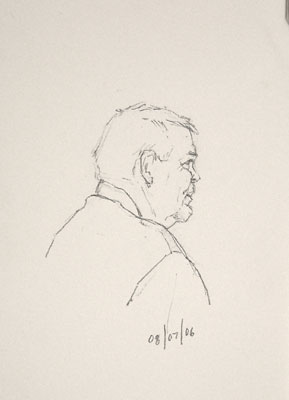 This guy was an absolute gift. A distinctive head, sitting close to me and sideways on so I couldget a good view of him without him knowing I was drawing him, and he didn’t move too much. Hewas chatting a fair bit with his wife (girlfriend? Maybe this was a secret triste) but overallhe was a very good sitter. Consequently, this is my favourite drawing from today.

As with the previous two, this one was done by laying in the main shapes first, then addinggradually finer detail until eventually I actually managed to get his features. I even had timeto make some corrections to this profile. The frustration that was starting to rise in me aftertrying to draw bull-neck man dissipated, and I started to enjoy myself. I must have got a good tenof fifteen minutes with this guy, an unusually long pose. Thank you, I’ll look outfor you again, and I promise I won’t tell your wife. 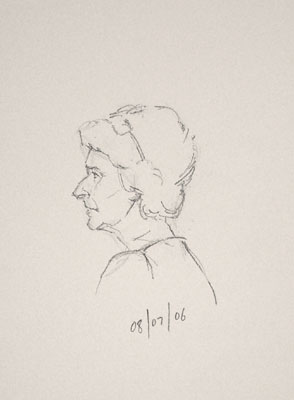 I took a flier on this one. She was right over the other side of the cafe, and I could justsee her in between the nice feller above and his secret girlfriend. I knew that it was going tobe a difficult one, but I already had at least one drawing I was happy with under my belt so Icould afford to lose this one.

It was her profile that attracted me to her, very sharp, with a beautifully distinctive hookednose. She probably hates it but I loved it. This one was started as before, with the four extremepoints placed first, followed by the shape of her hair. She was moving about a fair bit, and I had tocrane over the people in front of me a few times to be able to see her, (people must think I’m veryodd sometimes,) but thankfully the drawing came out ok. The likeness isn’t great, but overall theshapes and proportions are something like. I could have done a more convincing job if I could have seenthe details of her eyes a little more clearly, but not to worry, that’s cafe sketching for you.

Usually I like to end these write ups of cafe sketching trips with a tidy conclusion. AllI’ve got to say today is that it’s good to be back.