Third trip to the Cafe Nero, I think the staff are getting to know me.

Again, a very enjoyable couple of hours lying in wait for unsuspecting shoppers. In fact, the vastmajority of the time on these trips is spent waiting for a likely subject, trying to find people whoare interesting to draw, and don’t move about too much. Some people will stay reasonably still forfive or ten minutes, others can’t keep still for more than a second or two.

I tend to end up drawing older people for this reason, young people just have too muchenergy and jig about like they’re on strings.

Today I concentrated purely on line drawings, no tone. The last drawing I did on mylast visit waslike this and, although it wasn’t a very good drawing, it was stronger and more confident than previousones. Today I tried to stay strong and confident, doing a minimum of roughing out and going straight forthe outlines with a 3B graphite pencil. 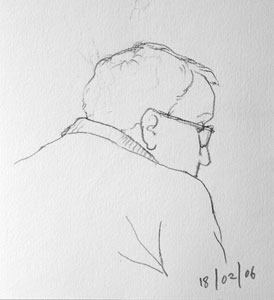 Today’s first drawing. It took a couple of goes to get into this one, you can see the ghost of the firstattempts showing through.

I think I caught this guy pretty well, and its not too bad for a warm up. My old habit of gettingthe arm too small has resurfaced though. The problem is the outside line of his arm, it should be further out.I noticed it when I was lining up the inside of his arm with his ear, but decided to leave it as it was. Itdoesn’t do to get too caught up in mistakes with these drawings, there’s so little time to get things down andthe time is better spent getting to the next shape, making sure you get the drawing finished before the sitterleaves. 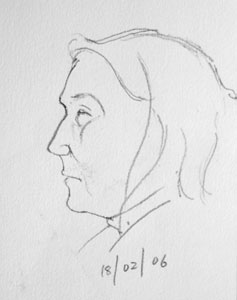 Second drawing, and a good example of one that didn’t come off.

She was moving around a fair bit, having an animated conversation, but kept coming back to the sameposition pretty much, so I thought she was worth a try. Unfortunately, I got the proportions of her profile allwrong from the start, so everything else was out of kilter too and the drawing was a struggle to complete.

I think I put about fifteen years on the poor woman, good job she didn’t see the drawing… 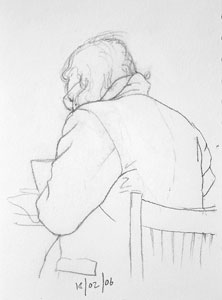 Number three. I’m pretty happy with this one. He was keeping his body fairly still and just moving his head around, soI started with his body and roughed in his head when that was done. I struggled a bit with his head, he wasmoving it a bit too much, and his straggly hair made it hard for me to get the form. I thinkyou can see that in the drawing – the body is quite strongly stated, the head is much more hesitant, whichspoils the unity a bit.

I’m pretty happy with the form of his coat though, although there’s no tone to give depth to the form, Ithink it’s possible to get some impression of form just from getting the outlines right. 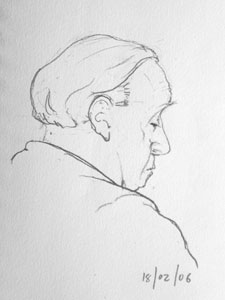 Getting warmed up now, this one came out ok too. I think its at least a reasonable likeness, although theshape of the back of his head is a little out I think. Also I’m not convinced about the line of his forehead.

It looks to me now like some parts of his head and face are drawn from a different angle than otherparts, which is certainly a strong possibility. His eye and mouth look consistent with each other, but his nose isout of whack with them. I don’t think you should be able to see his nostril, and I probably should have corrected thenose when I did the eye and mouth.

Not to worry though. Perhaps I’ll try to build in a ‘last look’ at the end of each drawing to see how things arerelating. I think I tend to be concentrating so hard on getting the lines in as I’m seeing them that I lose thebigger picture sometimes. That’s something to try and bear in mind for the next trip I guess. 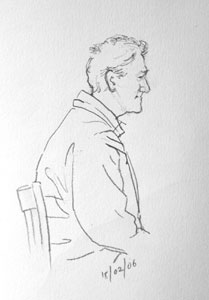 Last drawing for today, and one of my favourites so far. This one was fun. He was periodically chatting to hisfriend to his left and turning his head completely away from me, but every now and again he would stop and get backto just the position he was in before.

I played a waiting game with him. First I laid out his coat and the chair, then moved onto his head.I started with positioning his neck against his coat collar, then I got the bridge of his nose, sighting down to where hisarm crosses the front of his coat . He’s chattingagain, wait. Get the end of his nose. Wait. Up to his eyebrow and start his forehead. Wait. Get his ear. Wait.And so on.

This one took quite a while to finish because of that, maybe ten minutes in all, but he was a great subject.He had a distinctive profileand he hardly moved his body at all. I got his mouth a little high I think, which makes his chin lookreally big (sorry my friend,) but he did have a pretty prominent chin anyway so it doesn’t spoil thelikeness too much. I think I caught him pretty well, which is one of the reasons that this ispossibly my favourite from today, this one or messy hair guy.

Concentrating just on outline and trying to produce stronger more confident marks has helped my drawing today. I’mbeginning to lose the hesitancy which has characterised many of my drawings so far, and that feels good.

Although initially I resisted the ‘fast drawing’, short pose approach, being a methodical person, I remain convinced thatthe cafe sketches are doing more to bring on my drawing that anything else I’m doing at the moment. I think thatsometimes it can be a good thing to put yourself in a position which you would normally resist. The results can besurprising.