It’s been two weeks since I got down to the Cafe Nero for some sketching. I think the break might have doneme good, since today’s drawings came out a bit better than the last two trips I think.

I must have been feeling a bit brave today, because instead of taking up my usual position at the back ofthe room I sat at the front by the window. This had two advantages, firstly I had my back to the window so thepeople were better lit from that viewpoint, usually they’re silhouetted against the window, and secondly,people tend tosit facing the window so I ended up with less drawings of people from the back. The down side was that at leasttwo of today’s sitters twigged that I was drawing them. In fact I’ve got a feeling one girl left because shenoticed and it made her uncomfortable. Maybe I’m being paranoid. 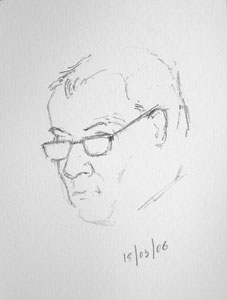 This is today’s first drawing. Unfortunately I didn’t get very far with this one before he left. Shame, it looks likeit might have come out ok. After he’d gone I roughed in a little more of the drawing from memory andsurprisingly didn’t completely ruin it. I guess that means my visual memory is getting better, which has to be agood thing. Either that or I’m internalising the proportions of the average head enough to be able to visulaiseit. Possibly both.

Last night I was working on some copies ofBargue drawings, I think that Bargue’smethod of simplifying shapes and the discipline of accurate copyingmay have rubbed off on me a bit. I certainly hope so, because I plan to do a lot of those copies. Turning outa reasonable drawing on the first go is a bit of a double-edged sword though: it’s good for the confidence,but then I feel more pressured to keep up the quality and not do any real hummers. Which of course I did, I alwaysdo. It’s just struck me that I’ve drawn this bloke before, a month ago to the day on the18th of February, he was the firstdrawing fromthat day too, but from the back. 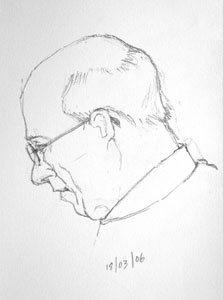 Second drawing. Alright, I’m going to come right out and say that I really like this one. It’s pretty rare, infact very rare,that I look at something I’ve done and think, “you know, that’s a good drawing.” But this one I like.In terms of likeness it’s not bad, but I got his neck a little too thick, he was quite a thin guy.

That said, the face and the shape of the top of the head are quite close I think. He was a bit of a gift because hehad such distinctive lines on his face.That made him much easier to draw. Also he was close to me, not ten feet away, which definitely helped. I was a bitparanoid he was going to notice, but he didn’t – at least not till he got up to leave. I had half a mind to show himthe drawing but thought the better of it. 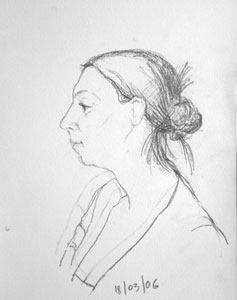 I’m a bit disappointed with this one. I’ve done worse drawings, much worse, but I really wanted to catch agood likeness of this girl and I didn’t get close enough to be happy with it.

I wasn’t sure about drawing her, since she was close to me and had twofriends with her, one facing me, so there was a very good chance she’d know I was drawing her. I much prefer itwhen people don’t know, because I don’t want to make anyone feel uncomfortable, becauseI’d be embarrassed if anyone wanted to see my drawing of them, but mostly because people act differently whenthey know I’m drawing them. I want to catch people off guard, as they really are, not as if they’re posing for aphotograph.

The reason I so badly wanted to catch this girl’s likeness was that she had something very classicalabout her profile. She immediately reminded me of Raphael’s drawings. I guess that’s quite a compliment, because Raphael’sdrawings are highly idealised, more beautiful versions of reality. Overall I got a reasonable likeness, but herchin is much too weak and her mouth is not quite right. The profile down her forehead and nose is good and her eye isright though, if you put your finger over her mouth and chin you can get an idea of what she looked like. Notbeautiful in a catwalk kind of way, but still beautiful, I would have loved to paint her portrait. This isthe girl I mentioned earlier who I think might have left because she knew I was drawing her. Another one thatgot away this one, if I’d had another few minutes I could have got her chin right. 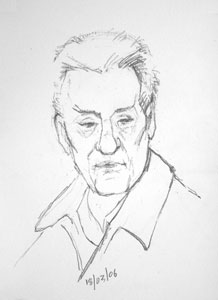 Here’s the hummer I was talking about. Actually I suppose it’s not so bad, but it was a difficult one to do. Hewas right across the room from me, a good thirty feet away, which made it hard to see detail. It also meant thatpeople were continually getting in the way.

About half way through this drawing I realised I’ddrawn this guy before too, strangely enough on thesame trip as before, the 18th of February. Maybe they’re both only allowed out on the 18th of every month.

The last drawing I did of this guy is a better likeness than this one, I guess he was just too far away for me to seehim properly, and I tried to get detail I just couldn’t see. I try to pick subjects based on how still they’re sitting,but some people just attract me to drawing them. This guy is one of those. He has a strong distinctive face, but healso looks like a very nice guy, always chatting and smiling. I hope I get to draw him again, maybe on the 18th ofApril. 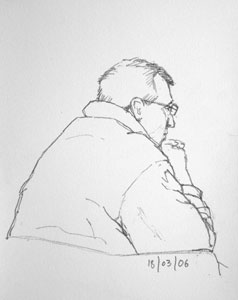 Last drawing of the day. I didn’t want to finish on a low note and I was having a good time, so I stayed for one more.

I’m glad I did, because I think this one came out ok. Not a brilliant likeness, fairly close, but what I likeabout this drawing is that I caught the attitude he was sitting in. His back looks real and solid to me, and I’m takingthat as a sign that I’m getting gradually better with proportions. Also there’s nothing really redundant in this drawingI don’t think, by which I mean there’s not a lot of hairy uncertain lines which don’t need to be there, it’s aneconomical drawing.

I must admit I’m relieved it went ok today, since the last two trips were pretty dire. I think I was getting abit too hung up on getting better every time I went, and for that reason it was perhaps a good thing that I had abreak for a couple of weeks. Today I felt more relaxed, less pressured and I enjoyed it more. If only I could have gotthat girl’s profile right.