This was the first trip in two weeks

This was quite a good trip, although it didn’t start well. I slept in and didn’t get down theretill about eleven, which meantthat all my favourite seats at the front window were taken and the place was busy. I ended upat the little table at the back where I sat the first time I went and I wanted to hide.

All the same, it went ok. I did four drawings, all of which are about the standard I seemto be hitting at the moment. They’re a lot better than they were when I starteddoing this only three months ago. I’m still missing accuracy in the overall shapes though. I canget some odd bits of detail in quite nicely, but from today’s drawings, I would say that noneof them are what you’d call a good likeness. The last one is well out. I think maybe I need toraise the bar a bit with these cafe drawings. I’ll have a think about how best to do it.

One noticeable thing about the drawings from this trip is that they’re all well placed on thepaper. Even though these drawings are small, I made of point of imagining a vertical center linethrough the people I was drawing, and related that to a vertical construction line on the paper.It helps to centralise the drawings. I’m wondering if these drawings might benefit from a kindof fast Bargue approach. It has to be fast and approximate with these drawings, but if I try tofollow the process a bit more – put in the highest point, the lowest, the furthest left and thefurthest right and relate everything to them – perhaps I can improve the accuracy without sittingthere obviously measuring. Hopefully the sight-size Bargue copies should be teaching me to measureby eye better, but I can’t see much evidence of that in these four drawings. Maybe because Iwasn’t consciously applying it, I’ll try to remember to do that next time. 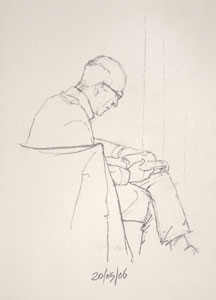 Usually when I get sat down with my coffee I like to settle in for a bit, see who’s there andwake up slowly. Yesterday morning I was especially dozy. But I noticed this guy as I was sitting down,and by the time I’d got my pad out he’d got his book out. Someone with a book is too good achance to miss so I got started straight away.

This is the first cafe sketch where I put a centre line in the drawing before I started. I tookmost of it out at the end, but it runs down pretty much through his ear and down to the cornerof the chair.

Although I’ve got a sneaking feeling his legs are too short, I think the construction line helpedwith laying out the drawing. I had him pretty much imagined on the paper before I started. Thelikeness isn’t good, apart from a general likeness of how he was sitting. For a first drawingthough, this one is alright. 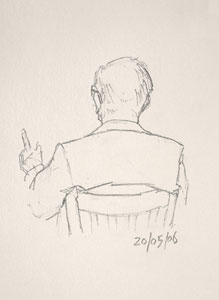 I was a bit stuck for people to draw when I did this one. Being in the crap seat at the back meansall I can see is the back of people.

This guy is a regular though, and I like him. He’s a friend ofPatrick’s. Or is it Winston. AsI was drawing him, he held up his hand in that position for a second or two, making some point, I triedto get it in from memory. The shape is something like but it’s a bit small I think. 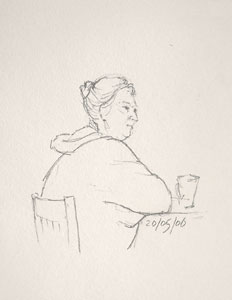 I don’t think this woman would be flattered by this drawing, I seem to have put about ten years on her. Thisdrawing is a good example of what I talking about earlier, getting the overall shapes right. I thinkher head looks too small for her body, something anyway is throwing the drawing out. The angleof her face is quite nice, but it just doesn’t seem to fit her body.

Maybe if I’d thought a bit more about where the line down the front of her face crossed her arm Imight have got the shapes better. 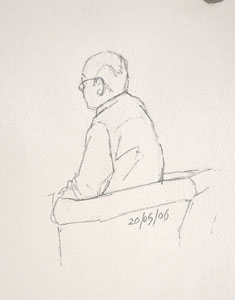 The last drawing of the day is also the worst from a likeness point of view. This looks absolutelynothing like him, even the body language is different. That said, if you weren’t there anddidn’t know you might think it was an alright drawing. I know better though.

I really think it’s time I went back to drawing basics with the cafe sketches and just concentratedon getting the main shapes in accurately. I think I’m trying to push ahead a bit too quickly, tryingto do nice drawings when I should really just be thinking about what I’m learning. For the next trip,the plan is to work on eye measuring, something I don’t do a lot of in the cafe at the moment.Lets see if a slightly different approach can move the drawings on a bit. Although they aregetting better, I’m still getting some very basic stuff wrong with them, and having to do themquickly is no excuse.