I think this is the first time I’ve been anywhere apart from the Cafe Nero with a sketchpad.Michelle managed to coax me out to go and see Jose Gonzalez. He was good but the venue was too big. 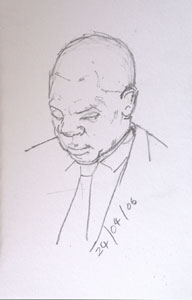 The first drawing I did on the train in to Waterloo from Epsom, this guy was sitting opposite me. I didn’t getall that long with him, he was only on for a couple of stops. Also he was only four feet away andfacing me which put me on edge bit. I’m pretty sure he realised I was drawing him. 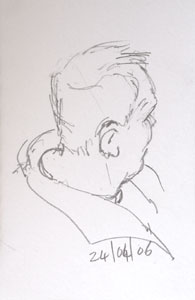 This is quite an amusing drawing, mainly because it’s so bad. It doesn’t bear the slightestresemblance to the guy I was drawing. In my defense though I was on the tube, and it wasrocking about like hell. It was all I could do to keep the pencil on the paper. 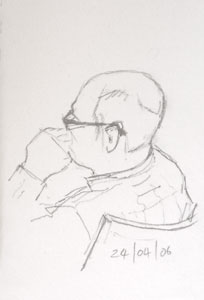 The picture is a bit blurred of this one, I’m in the Apollo now. He was sitting across from me onmy right, a couple ofrows down. I could tell he was one of those people who wasn’t going to move much so he seemedlike a pretty good bet for a drawing.

It’s ironic that this photo is blurred because the lighting in the placewas very low and it was hard to make out any distinct shapes.

At least I got some drawings out of the trip into town, even if the conditions were less thanfavourable. Drawing down the cafe is much nicer, I don’t think I’ll make a point oftrying this again.