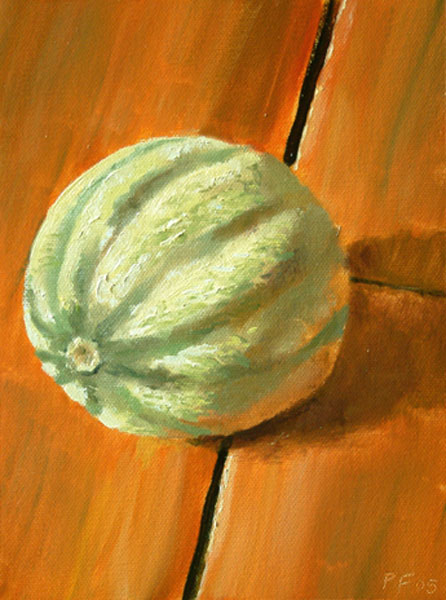 This one was a bit of an experiment, which meant I had to depart from the method a bit. Its great having a set procedure to follow, but I think you need to be flexible with it if the circumstances demand it. This was one of those times.

Recently I’ve taken to doing a lot of checking with the colour checker before I start. Doing that today, one of the things that struck me was how close in colour the reflected light from the floorboards on the right hand side of the melon was to the colour of the floorboards themselves. That was something I wanted to catch.

Also, I was thinking about the floorboards. It would be very easy for me to get caught up in the wood grain, which was the last thing I wanted, so I decided to do the floorboards with washes so that the brush strokes could serve as the grain. As long as I got the colour right it should work.

By extension, that should mean that if I do the reflected light on the melon in the same way, I should get a nice luminous shadow on it.

It didn’t come out too bad, but I was struggling a bit with the light today. It kept changing quite drastically, so by the time I came to do the shadow on the melon, it was very different from what I’d seen before I started. Not to worry though, I guess I just have to get better at dealing withthose kind of transient changes in light, so the practice will do me good.

The effect works fairly well I think, with the exception of the parts where the light moves from full light to shadow on the Melon, and then to reflected light. The change from shadow to reflected light is pretty unconvincing.The paint just kind of stops. Since the reflected light itself came out nicely though, I’ll try some more experiments with washes for reflected light. Working on a white ground made this possible. Had I been working on a toned ground I don’t think it would have worked at all. The light travelling through the paint and being reflected back from the canvas behind it is what gives the shadow it’s luminescence.

Knowing that the only way to get a decent edge on the melon was to cut into the floorboards and not the other way round, I completely finished the background first. This was the big departure from my normal method of establishing the lightest and darkest points first, then blocking in the shadow shapes across the whole surface of the painting. I wouldn’t be able to work into it around the melon afterwards since I’d lose the brush strokes if I did, and thus the wood grain. Here’s the painting when I’d finished the floorboards and was about to starton the melon: 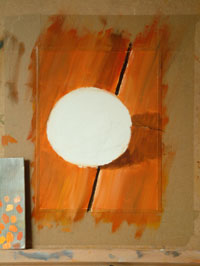 Pretty happy so far. It took around 20 minutes after roughing out to get to this point, just slapping it on, concentrating on the colour. One mistake I made was mixing medium with the paint. I thought this would give me a nice glaze, allowing the white ground to show through. It did, but it also smoothed out the brush strokes more than I wanted, I should have stuck to just turps here and I would have got a nicer texture, the brush strokes would have been more obvious. I’ll remember that next time.

I used a mix of cadmium yellow pale, alizarin crimson and a touch of ultramarine to get the colour of floorboards – my usual method now for getting browns. No yellow ochre or sienna in sight…

The shadow cast by the melon is a fairbit lighter at this point than it is in the finished painting. This was one of the effects of the changing light, it seemed to fade particularly early today and I couldn’t work past about 15:00. I darkened the shadow at the end because I’d just worked across from light to shadow on the melon, I thought it would hang together better if the shadow on the melon and the shadow cast by it were done under roughly the same light conditions.

After putting in the floorboards, I went round the inside edge of the melon with a turps-soaked rag to get the paint off. Then it was out with the colour checker to get lightest green of the melon.

I used titanium white today, to be honest it feels no different than flake white to me in use. Maybe my eye isn’t sufficiently attuned yet, but I can’t tell the difference between them. The colours on the melon are all mixed too -ultramarine, cadmium yellow pale, white and a touch of alizarin where it needed knocking back. I stuck strictly to my five colour rule today, just the primaries and black and white. The only black on painting is the cracks between the floorboards. I probably could have used a mix of ultramarine and alizarin to get it, and done the whole thing with only four colours. But I was lazy.

Things proceeded pretty much as normal from there, with the fading light (and a phone call from a client) forcing me to wind up sooner than I wanted to. All told this painting took about two and half hours.