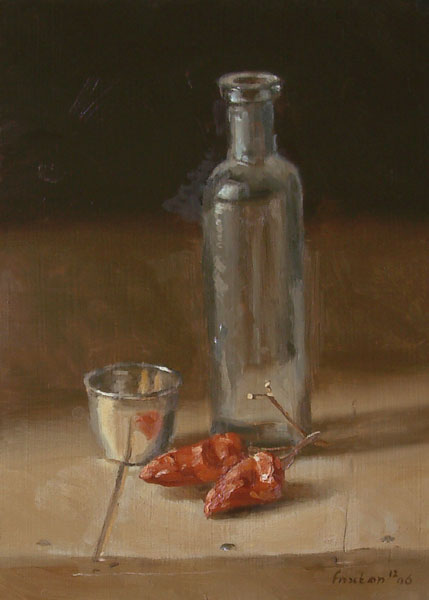 This is the most adventurous painting for a while, in terms of colour at least.

I used(hold onto something…) five (that’s right, five!) different colours.

Well, alright, thatmight not seem like much, but after using first one, then two and very occasionally threecolours for the last run of paintings, this feels like a veritable kaleidoscope to me.

But lets not get carried away with ourselves here, this painting is still mostly raw siennaand ultramarine blue. Raw sienna presented some problems for me at first, but I’m happy to saythat we have now resolved our differences, and I think that this might well be the beginningof a beautiful relationship.

On the last couple of paintings I’ve used the raw sienna with just a touch of ultramarinelike a grey, as the main colour environment of the picture. Highlights and shadows of thebackground and ground plane have been done with differing tones of the same raw sienna/ultramarinemix.

Of course this has been helped by the fact that both arrangements of objects have been placedon a wooden box, which, being a yellery-brown colour, fits pretty well with the raw sienna. I’vebeen considering doing some studies to see how far I can stretch this, by painting something thatisn’t yellery-brown with these two colours. I think I may revisit theblue/red tonal exercises and do onein just raw sienna, to drive the colour as far as I can.

So what about the other three colours? Well, there’s a little raw umber in the background. After I’d laidit in with raw sienna and ultramarine, it felt to me that it wanted a bit more warmth and to be a slightlydeeper tone. I could go deeper with more ultramarine, but that cooled it a bit too much for my liking.Next up is yellow ochre, which has been used fleetingly on the egg cup, and finally transparentoxide red, which I mixed with more yellow ochre for the capsicums.

Transparent oxide red was recommended to me my painter friend Jim (Hi Jim). He knows a lot about colour,in fact he’s completely obsessed with it. If you don’t believe me, you can check out some ofJim’s paintings. Transparent oxide redis a wonderful colour, at leastMichael Harding’s version is, I use his paints exclusively now. It hasa very high tinting strength, retaining it’s warmth well into the lighter tones when mixed with white.I plan to make it a regular visitor to my palette, whenever I want something warm with a higher chromathan burnt sienna.

I like the arrangement of this one. There’s a nice hint of complimentaries between the green/bluebottle and the orange of the capsicums. This egg cup I love to paint anyway, since being silver, itpartakes of it’s environment colour to a large degree. When you’re painting highly reflective objectslike this egg cup, what you really do is paint the background and other objects wrapped round the form.Keeping a separate brush for each colour as I do, it’s a simple case of picking up the various brusheswhich were used in other parts of the painting, and applying the coloursin the right places, with a little tonal adjustment here and there. The silver just pops out, almost of it’s ownaccord it seems.

But I can’t take credit for the set up. This was another one of Michelle’s moments ofinspiration, like the duck egg. She happened to be knocking around the small back room I laughingly callmy studio while I was messing around with some objects for a set up, promptly took over, and set this up.Perfect. My painter friend Trisha (Hi Trisha), calls her my studio fairy.

I took a couple of progress shots as I went along with this one, so here they are for your edification and/oramusement: 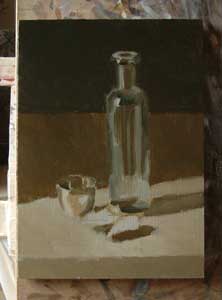 Here we are at the early blocking in stage. The method of building up a painting described by HaroldSpeed in hiselementary tone exercisehas become my standard method now. First the background is blocked in, then the ground. Then the main shadows,then the objects themselves. Harold recommends making sure that all the adjoining edges of each tone block arefinished as they will be in the final painting as they go in.

I depart from that, largely because I findit difficult to envision how all the tone blocks are going to relate to each other until I have them allestablished. Once they are all blocked in, I make adjustments where necessary, and then start to define andrefine the edges. I find this a more useful approach, since I don’t then have to make any major changesto the tones after I’ve done the edges.

I should already have a feeling of the light at this stage. If Ihaven’t, I know I haven’t judged the tones correctly. But I’m not trying to match the tones I seeexactly, I’m trying to translate them onto the panel so that I get something of the feel of the light Iwant. Often that means compressing the tonal range so that the highlights don’t get lost in the larger lightareas, there has to be a noticeable tonal step between them for them to work. I’m talking in particular aboutthe highlights on the egg cup and to a lesser extent on the capsicums here. I try to reserve my lightestlights for these areas, which means compressing the ratios of the other tones so that I still have enoughheadroom in my lights for them to stand out. 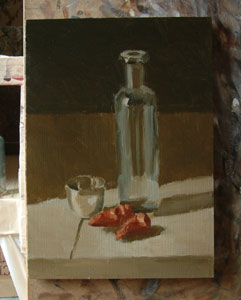 Here we are just before I start to work the edges between the tone blocks, the panel is covered now andI can see how the tones are working. Getting to this stage has taken around three to four hours I think,but that includes about an hour setting up the palette. I first started doing this with the raw umber studies,I find it a great help in judging the relationships between the tone blocks, and it also makes for a niceuninterrupted session once I start painting, with a minimum of time spent mixing.

I premix each neat colour with a 50/50 mixof good quality pure gum turpentine and cold pressed linseed oil, just a few drops to thin down the consistencyof the paint a little so that it flows more easily off the brush. The palette set up varies alittle every time, but for this one I started with premixed tonal ranges made from the raw sienna, ultramarineand white, four values from dark to light, with each successive blob mixed with a higher percentage of flake white.I had four of these series of premixed tones ready, one just raw sienna, one with mainly raw siennawith a little ultramarine, one a mid hue mix of the two, and one with a higher percentage of ultramarine.When these were prepared, I had sixteen colours ready mixed, with also the white, raw sienna and ultramarine neat.

When it came to the capsicums, I did the same thing. I decided on the main colour for them, a mix of yellowochre and transparent oxide red, and mixed up three tones from dark to light. It takes time and some patience toprepare the palette this way, but it means that when you come to paint, all you have to worry about is thepainting, the colours are ready to go. Painting is a complicated task, and anything which simplifies itis a good idea in my book.

Once this stage is reached, it’s really just a case of refining the edges and working successively smallervariations and planes into the main tone blocks. I find this to be a good approach, because any major problems can besorted out whilst the brush has plenty of room to play, without destroying any fine detail. I’m always workingwet into wet, so having to change the tone of a main block of colour once details are in would meana lot of wasted time. The detail isalways put in right at the end. It’s always the most enjoyable part of the painting, when the hard, steadywork of laying a solid foundation is done. Suddenly it all comes together at the end, and the objectsstart to pop off the panel. If I’m lucky that is, and if I got the beginning stages right.