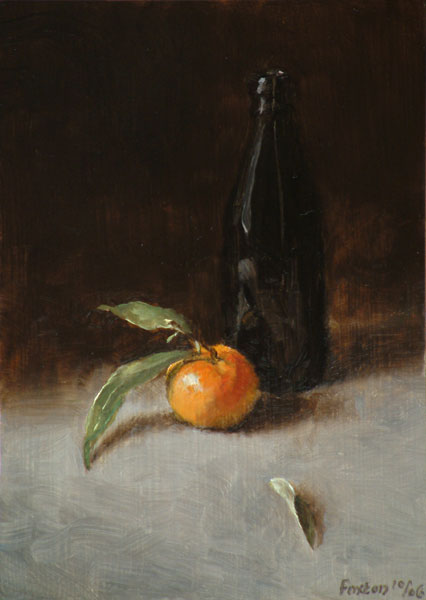 Generally speaking, I try to stick to my schedule of practice. But every now and again,something pops up that I really want to paint, and this was one of those times.

Last Thursday there was a French market in town, which turns up irregularly every few months.They have interesting stuff you don’t normally see in the shops here. Like little clementinesstill with the leaves attached. Supermarket produce always has to be cleaned up and packaged which makesit less interesting to paint. I’m considering writing a strongly worded letter of complaint to themanaging director of Waitrose. Don’t they know that there’s aspiring painters out here in need ofsubjects? First they go and kill the proper high street shops, then they package everything up soit looks like it’s made of plastic. Outrageous.

So anyway, the little clementines caught my eye. I’m really only supposed to be doing monochromes at themoment, practicing tonal relationships, which I actually did with this set up the day before I did thispainting. You can see them here.So, since I’d been a good boy, I allowed myself to stray from the path momentarily and do a full colourpainting.

One of the things that’s struck me about the red/blue tonal exercises is that the red versionshave an interesting warm shadows/cool lights dynamic. I wanted to keep that withthis painting, but with a wider tonal range, so I’ve used raw umber for all the shadow areas, and rawumber mixed with white forthe lighter areas. I tried to keep that consistent, except for the clementine, of course, since the warmorange in the light is somewhat contrary to that. But I couldn’t very well paint it blue without going allpost-modern, or something. The white cools the raw umber in the same way as it did the cadmium red. I dothink it works, and I intend to mess about with that a bit more.

At some point during the painting of this picture, I introduced some cobalt blue to the surfaceof the cloth in light. The objects were sitting on a grey wool cloth, so I reckoned that I could do pretty muchwhat I wanted with the colour there, as long as the tone made sense in the picture. It intensified the warm/coolbalance a little more.

Having painted this picture twice already the day before certainly made this painting easier. But dealingwith full colour for the first time in about three months (or more) did throw me a little. There are areaswhere I’ve lost the balance of the tones, particularly on the biggest leaf on the clementine. It’sinteresting that because I’ve got the tone there too light overall, the leaf loses its form, it’s noteasy to read the direction of the plane. That leaf worked much better in the blue and red versions.

Also, I overworked the painting, fiddling and diddling with the pull and push of balancing thetones and the colours. Paint works much better if you can get it right first time, or close to, andthen leave it alone. If something’s wrong, I think it’s better to take it out entirely and do itagain than overworkit by endless tweaking. I wiped off the bottom area a couple of times before I got it anywhere near.And I lost it a bit with the edges too. But overall I’m quite pleased with thislittle painting. It’s the first one I’ve done since I stopped painting to concentrate on tonaldrawings, and I think that the practice with charcoal has had a positive effect.

Being a rather slow, methodical person, I’m now going to do a series of tonal still lifes in paint,primarily with raw umber and white, I think, before I get back to full colour work. Although it’s difficultsometimes to let go of the wish to produce a nice piece of work and to see these paintings and drawingsas what they are,just exercises, its a very beneficial way to approach things if you can do it, and results infaster progression in the long run I think.

This painting is also evidence of how I’m moving away from literal translations of what I see. Theshadows weren’t that colour in reality, they weren’t brown. The shadows on the surface of the cloth cast bythe clementine and the bottle were grey. And the bottle was more defined, I’ve pushed it back by softeningthe edges somewhat. At the bottom left, where I’ve darkened the tone by adding some cobalt blue mixed withraw umber, I’ve departed completely from what I saw. That was the lightest part of the cloth. But the painting feltlike it needed it there, to bring the focus of light up around the clementine more. It also gives a vaguediagonal working against the main diagonal of the composition and the direction of the light. Despitebeing a bit heavy-handed, it works pretty much how I wanted it to, andI did for the sake of the picture. I can’t think of any one of my previous paintings where I’ve done anythinglike that.

But I’m still working very much with what I see, and that won’t change. Don’t expect to come back in sixmonths and see abstract paintings all over the place; trust me, its not going to happen. Oh, and the extra leafat the front in this version is just so there’s another diagonal working across the main one created by theshadow blocks. I think it gives it a bit more depth too.

I have a nagging doubt that this painting looks too much like I’m trying to paint like I’m in the 1700s,which I’m quite obviously not. I do believe that it’s a bit of a lost cause trying to produce work that looksjust like, say, a Baroque Dutch still life. If those painters were alive today, I doubt that they’d be paintingin the same way. They’d probably be sent into euphoria by the sheer number of colours available now. But likethat elusive quality ‘style’, that so many people seem so concerned with, I believe ‘contemporary’ will come ofit’s own accord, or it won’t, and neither of those things happen by trying to force it. I think the best thing todo is just to follow your nose and let the direction grow naturally out of the work.