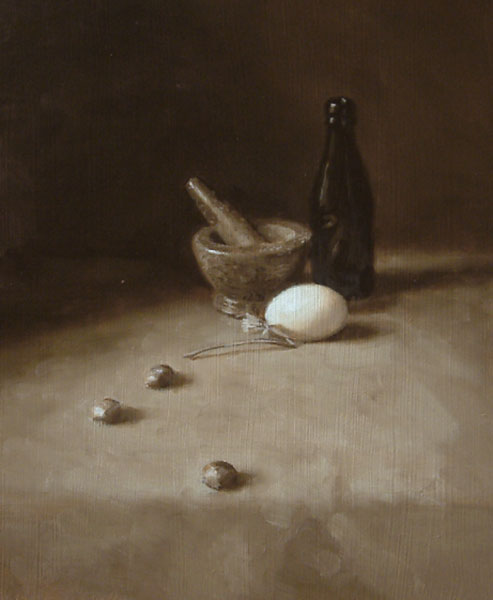 After six small tonal studies, I thought it might be an idea to try something bigger.All the studies so far have been done in a single sitting, this one was doneover three days and represents about 16 hours work.

I wanted to see what would happen if I tried to take one of these studies to a higherlevel of finish. Ordinarily, my larger efforts turn out to be big disappointments. I think thisis the first one I’m really happy with.

Working on it for three days gave me much more time to get the drawinga bit more controlled than I usually do, and to spend more time on the textures and the edges. But althoughI’m pleased with the way this one came out, to the extent that I’d say it’s the nicest painting I’ve doneso far, I can’t help feeling that some of the immediacy and freshness of the quick studies has been lost in someway.

What I’d like to do now is make a painting that has a more complicated set up, like this one, and withthe same attention paid to the edges and surface textures, but with a bit of the looseness of my favourite onesfrom the series of small studies, like thetea lights. Overall, the paint layers arethinner on this one than they have been lately. I must admit, there’s something I like about thick,juicy layers of paint. Not just for the sake of ‘bravura’ brush work, though, too much of that for it’s ownsake is kind of like music with impressive production values. If there’s not a solid tune in there, you quicklyget tired of it. There’s somethingthat happens when the paint is on thick and wet, handling possibilities seem to multiply with thethickness of the paint, although it’s harder to control.

Despite that, I’d say that overall this one is a bit of a success for me. The set up all hinges aroundthe egg, and the composition was set up tolead the eye to it from all directions, most notably up in a curve from the conker at the front. Ah, conkers.My favourite subject. This time I left the conkers very loose, mainly because they’re just bit part actors,designed to pull up to the egg, so I didn’t want them to distract from it at all. I have Michelle to thank forthe egg, like all my best ideas. I was sitting there with the bottle and the mortar and pestle, wonderingwhat would go with them, when up she pops and sticks a duck egg next to them. Bingo – a black, a greyand a white object, perfect. This is, after all, a tonal study.

But I have a confession to make. I told a big porky pie in this painting. The conker at the front wasn’treally there at all. I made it up. The painting just felt like it needed some foreground, so I dropped thefront of the cloth down a bit and put in another brown blob. I bet you’re looking at it now and thinking”Actually, it doesn’t look real, that conker.” Well I bet you never thought that before I told you, did you?If you did, you can always email me and let me know. But I still won’t believe you. 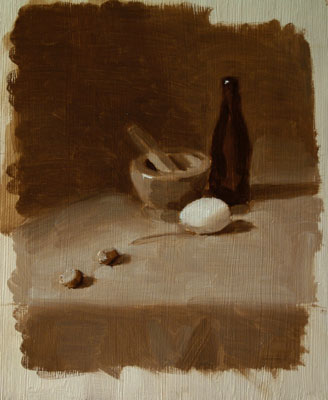 Here’s the painting at some stage on day two. As you can see, the mystery conker hasn’t made it’spresence felt yet, and the table top finishes closer to the egg. I don’t think the composition wasnecessarily bad at this point, but it just felt a bit too strongly diagonal, and like it needed a moreobvious route in to the egg for the eye. I think it’s better now.

This also shows that the painting was built up in the same way as the smaller studies,establishing the tones of the main blocks first, and then refining from there. The only major tonal changefrom this was a darkening of the background. In the finished painting, I’ve also flogged the background gentlyin order to smooth it out. I’ve tried to go for smooth shadows, with more of the texture from the brushstrokes showing where the light hits. I think this reflects the way we see. Soft, vague shadows, withmore texture in the light. Hopefully it gave the painting a bit more depth of field, subjectively speaking.

I’ve also kept the vast majority of the edges soft. Originally, the egg had quite a sharp, well definededge across the top where the light hits it, but somehow it seemed to flatten the form, although itdid provide focus and draw the eye nicely. A softer edge, as it has now, gives it more of a feelingof roundness I think. I sacrificed the composition a bit for the form of the central character. But it’sa pretty good trade off. I think the eye is naturally lead to the egg anyway.

In fact, as it’s ended up, there’s barely a hard edge anywhere in this painting. The sharpest one ison the imposter conker at the front, to bring it forward. The more I work on edges, the more I softenthem it seems. Whether this is just because I prefer the feel of soft edges, or whether it actually does helpthe feeling of the light and reality, I’m not sure. But the light was very low for the three days Iworked on this painting, they were three very overcast days. I think I’ve caught some of that feelingof soft light, and that makes me happy. Sorry if all those soft edges make you squint, it’s not a blurredphoto, it’s the way I painted it.

Since this one came out ok, I think it’s time to move on to step two of the tonal studies plan, addinganother colour to the palette. This is going to be ultramarine blue, in order to give me the opportunityto work with a warm/cool contrast without getting all confused by a full palette of colour. It will alsoallow me to mix a range of warm and cool greys. Hopefully this will help me slowly back to colour, andgive me yet more practice with tones. The more I work with tones like this, the more I think that goodtonal values are the key to the kind of painting I want to do.