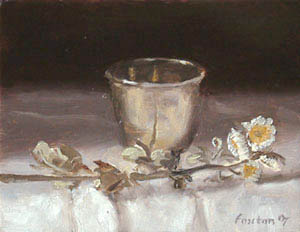 Recently I’ve noticed that the days are starting to lengthen again. That’s very good news for me,since I prefer to paint by natural light. Today was a bright, clear day, and it didn’t get dark untilafter four. That meant that, after spending the morning doing some corrections onyesterday’s painting, I reckonedthat it was worth a stab at doing another small one today before the light went. After all, the paint waslaid out and ready to go.

Lately I’ve had to make early starts on the days when I can paint. The reason is that I’ve started to workregularly with a prepared palette now. As tone becomes more important to me, I’ve been looking for ways toimprove the way I use it in the paintings. One of the most useful ways I’ve found so far is to preparethe palette before I start. 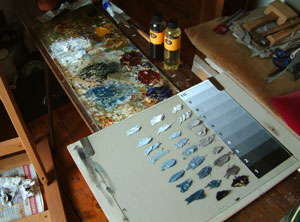 What I’ve got set up here is a sheet of glass with some grey(ish) paper underneath it, and also agrey scale, giving me tonal values from 1 (black) to 10 (almost white). I’m using my dirty old paletteas working area to mix colours, then laying them out on the glass palette.

The three rows of colours I’ve premixed here are the basis of a lot of my paintings at the moment.The row on the far right is a mixture of burnt sienna and ultramarine, with slightly more burnt sienna togive warm grey, mixed out in stages with flake white. The middle row is the same two colours, but with slightlymore ultramarine, giving me cooler greys. The row on the left is raw sienna and ultramarine, which producesmore greenish greys.

The idea is that I can choose a cooler or warmer grey of the same tone, or mix horizontallybetween the two. Mixing vertically, a darker tone into a lighter one is a no-no. But in practice I do itsometimes anyway, mostly due to lack of discipline. For this painting, I had the palette set out like this,but also with a fourth row of raw sienna and ultramarine with more sienna, giving a more yellowish cast to thecolours. I used that row the most for this one, but the cloth was painted mostly with the row on the rightin the shadow areas, moving to the row in the middle as it came forward into the light – warm shadows,cool lights.

This might seem a lot of trouble to go to, and it does take me an hour or two to get things set up this way,but once I’m painting, it drastically cuts down the amount of time I have to spend on the palette. Thepainting goes much faster. It also means that I concentrate much more on the tones I put down. I’m beginningto think that mastering tone is the key the colour, to believable colour that works in the painting. Ifthe tone is wrong, no colour is going to look right. I started my investigations into tone as an exercise,to improve my understanding of it, but now it’s become such an integral part of the paintings that Ino longer miss the bright colours I used to use, in fact they look garish to me now.

I can imagine people thinking that the prepared palette approach could be too technical, that it couldstultify creativity. In fact I think it releases it, because you don’t have to becontinually messing about with the paint trying to get what you want. The mixing doesn’t get in the way,and the painting goes much faster, more naturally.

You can also see, next to the palette, two bottles with yellow labels. This is the Studio ProductsMaroger medium. Onebottle contains black oil (linseed oil with lead), and the other double mastic – a concentrated masticvarnish made with mastic and turpentine. These two are mixed together and allowed to gel for 15 minutes orso to make the medium.

This painting was done using the couch method again, covering the panel with a thin layer of the mediumwhich is then painted into. A combination of the couch method and the eggshell-smooth gesso panel gives awonderful fluidity to the paint, but also makes it more controllable at the same time. The paint goeson slick, but then stays where you put it. It has to be tried to really feel how that works in practice.Both the medium and the traditional gesso are set to become mainstays of my approach now.

Painting is a funny thing. Yesterday’s dried peppers and berries painting took three sessions tocomplete, and some of it was a struggle. I’m still not entirely happy with the berries. This painting tooka third of the time, or less, but is the more successful of the two for me. I just seemed to get into thezone somehow with this one. Everything went right.

All the preparations I do now, spending forever working out the composition with the viewfinder, mixingthe colours and settingup the palette, seem almost like a meditation at the start, helping me to get into the right mood to paint.But when it comes down to it, it seems to be in the lap of the gods whether or not the painting willwork out. I think this one did.