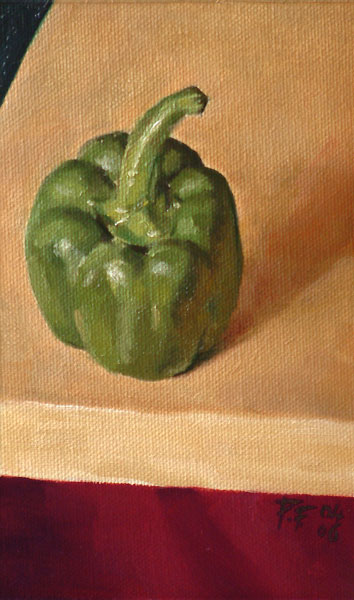 I seem to be settling into a routine now of doing a painting once a week on a Sunday. I guess that makes me a Sunday painter.

The nice thing about painting on Sundays is the lack of interruptions. Clients won’t be calling, in fact people rarely call on a Sunday, and since Saturday is Cafe Sketching day, Sunday seems to be the best day to paint.

Today the light held out well, the gods of light must have thought they’d had enough fun with me when I painted the pomegranate last week, or maybe they were off bothering somebody else. The sun did come out a couple of times, completely changing the light, but I took those times as an opportunity to take a break and have a cuppa and a roll-up. Most of the day it was fairly light, but slightly overcast, my favourite light for painting at the moment.

This painting took about an hour and a half to set up, and about four to five hours to paint.

It’s really worth taking the time to set up a still life properly, making sure the light is nice, the easel is nicely positioned next to the subject, the light is consistent across the still life and the canvas, and the palette, brushes etc are all laid out ready to go.

The last thing you want to do is to have to go off hunting for a particular colour or brush half way through the painting, it breaks the flow. Flow is everything. Once I’m in the zone, whether I’m painting or drawing, the slightest interruption – looking for a rubber, the phone ringing, anything – can disturb my concentration and it takes a while to get back into the zone again, if I do at all. As often as not an interruption means the end of whatever I’m working on. 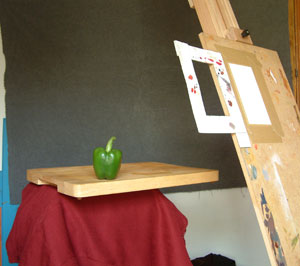 Here’s the set up I used today. Not much has changed from the set up I used for Patty’s pomegranate and the paintings immediately preceding that one. Like the pomegranate, I’ve set up the still life a bit lower so I’m looking down on it from above. No particular reason for this, it just makes for a nice painting I think.

You can see herehow far I’ve raked my easel forward. This is because of the little viewfinder I use stuck to side of the drawing board. The viewfinder becomes the picture plane when I’m working like this, so if I don’t have it pretty much flat on to the subject, from the point of view from which I’m looking at it, the viewfinder will be foreshortened, and the perspective will throw out the proportions at the drawing out stage.

I pinned up the grey cloth on the back wall because I didn’t want any reflected light from the wall on the pepper. I’ve been less than convinced with the way I’m painting reflected light lately, so I wanted to cut it down as much as I could to clarify it. With it set up like this, the only reflected light on the side of the pepper in shadow was coming up off the bread board. I think it made it easier to see. 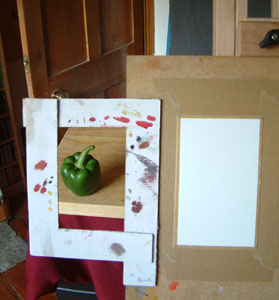 Here you can see pretty much what I saw through the viewfinder when I was painting, although the angle of the viewpoint is slightly different from what I saw.

Of course the colours are out, the camera always lies, don’t let anyone tell you different. What strikes me most though is how out the tones on the pepper are in this shot. They were nothing like this. I guess it’s something to do with the camera taking the blank canvas as the lightest light in it’s range, and toning everything else down accordingly. It’s a good illustration of why I think painting from photos is a bad idea. You really may as well just take a photo in my opinion, since the camera does not see what we see, it does not see reality. If you’re learning like me, do yourself a favour and paint from life. Your work will be much richer and much more alive. That’s why they call it painting from life.

Again, throughout this painting I spent the majority of the time mixing colours, and checking them against what Isaw through my colour checker. After the last painting was finished I coated the colour checker with a fresh layer of neutral, mid toned grey. It made it much easier to check the colours.

Staring with the colour on the top surface of the bread board, I laid in a light flat colour with quite thin paint, almost a wash. It seemed to suit the texture of the bread board to use the paint thinner than I would if I was painting a white cloth, my usual support. Also I’ve noticed I’m using the paint thinner now overall. Back when I painted the carrots and squash last November, I was applying the paint very thickly. I did it to make sure I didn’t get too hung up on details. Now I find a better way to do that is to use the biggest brush I possibly can. Small as this painting is, it was almost entirely painted with size 4 filbert and round brushes, with a few details put on at the end with a size 2 and some of the smaller highlights and shadows done with a rigger – a small, long, thin brush usually used for signing. 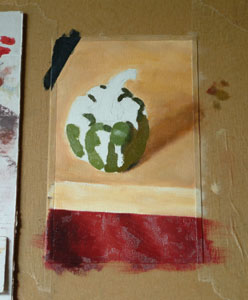 Here’s the painting about two hours in. I’ve laid in all the background first, and started in on the pepper. I’m working very slowly, matching colours to small areas on the pepper and putting in small dabs, as close as I can get to them to where they are on the pepper. The only large area of colour I put in is the reflected light inside the shadow on the right of the pepper. The colour checker told me that this area was all pretty much the same colour, so I trusted it and put it down.

Yet again, all the way through this painting I was surprised by what the colour checker was telling me. If I’d trusted my naked eye on the colours, I would have got almost all of them too light. In this painting, I was also struck by how little difference there was in tone between the lighter and darker areas of the pepper. No doubt this was largely due to the reflected light from the bread board lightening the shadows. Peppers have very smooth, reflective surfaces so the reflected light in the shadow areas is quite pronounced. The colour checker, unlike the camera, does not lie, (at least assuming the lighting is set up right.)

It pays to trust your eye and put it down as you see it, not as you think it should be. I could see at this stage that the pepper was already starting to live on the canvas, even though so much of it was still left blank.

The rest of the painting went on pretty much like this, slowly and carefully checking colours, then putting them down in small dabs. The pepper painted itself. I had the feeling that I was watching someone else paint, and the painting was coming together before my eyes without me really having to put any serious effort in.

I’m happy with this painting. It’s the sixth one of the ten single objects series, and I think it might be the best observed one yet. The colours are closer I think, and that gives it a stronger feeling of light. It really is all about the light.

I needed this today, because yesterday’s cafe sketching trip was such an unmitigated disaster. It knocked my confidence. I think I know why that was though, I didn’t give myself enough time to slow down to what I’ve decided to call seeing pace, and the drawings suffered accordingly.

Today I worked very slowly. The importance of slowing down enough to see properly hit me like small revelation early on in this painting, so I consciously took my time, made myself slow right down until I had time to see what I was painting. That may seem like a pretty obvious requirement, but today it hit me just how important that really is, and how much I need to slow down if I’m to see properly and not let my eye skip over things and leave my brain to make up the rest. Because my brain is always, always wrong. Almost as wrong as a camera.