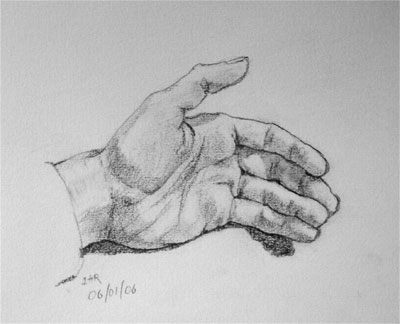 This is the first in a new series, twenty drawings of hands.

So far I’m taking a slightly different approach with these hand drawings, compared to theself-portrait drawings. I’m notdoing any measuring, no grids and no viewfinders. For this drawing I started with the crook between the thumb and thetop side of the hand, drawing the negative shape between them first and then following the outline rounduntil the edges joined again at the end of the thumb.

Initial laying out was done very lightly with a B pencil, then restated more strongly and with closer observationto the detail with a 3B, followingthe contour of the edge as closely as I could. I find it much easier to concentrate on that once the overallshape is roughed in. Tonal shading wasdone with a 6B.

Now it has to be said, I’m not drawing exactly what I see here. It became obvious to me when Iwas doing the self portrait drawings that drawing is different from painting in terms of recording what I see asfaithfully as possible, mainly because of the way the edges of objects are defined in drawing.

With painting, an edge between one object and another can be described by colour, so the edge is obvious even whenthe tones are very close. Not so drawing. The only way to show an edge shared by two similarly toned objects isto draw the line of the edge, even though the line isn’t really there as it appears in the drawing.It seems to me that drawingis much more a kind of codifying of reality than a faithful representation. In most cultures that I can think of,right back to the earliest known cave paintings, edges in drawing have always been defined by lines, but I suspectthat this works because of convention – we know that when a drawing contains a line, it can be the edge of anobject or an edge shared by two objects. The edge of an object doesn’t exist exactly as it’s represented in thedrawing, but because convention allows us to see a line on paper as the edge of an object, it works in practice.

This reflects a point of view I’ve been coming round to more as this project progresses, that the foundationof the approach I’m using, to see correctly and to record faithfully what I see, is basically flawed. That doesn’tmean its useless, it isn’t. Or that I’m going to abandon it, I’m not. But I’m having to be pragmatic and to back offa little from applying it too strictly.

I guess the approach is changing a little and becoming something more like: seeing the subject as accuratelyas possible, then finding a way to represent it as convincingly as possible within the conventions that we areused to using and the limits of the technique and materials. I can live with that if it gets me where I wantto go.