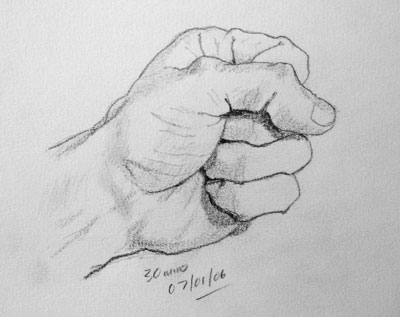 This one is a more economical drawing than the last one.

Once I’d done the outline, in the same wayas the last one, I had half a mind to leave it with no shading at all since it looked kind of completeas it was. When I did put the shading in and suggested some of the tones, I kept it pretty light becauseI didn’t want to detract from the line, some of which I like, especially around the top of the hand wherethe index finger is bent round.

I’ve been thinking more lately about the four elements of light and shadow in drawing: the cast shadow,the edge shadow, the mid tone and the highlight. It’s a standard way of looking at drawing form which as faras I’m aware goes back to the Renaissance, maybe before.

A cast shadow is a shadow on one object cast by another. The shadow on the middle finger under thethumb is a cast shadow, there’s also one cast by the little finger on the palm of the hand below it.

This is a shadow cast on an object because it’s facing away from the light. The area between the lastjoint of the fingers and the nails is edge shadow, also on the bottom of the thumb and behind the knuckleof the thumb.

Well there isn’t too much mid tone in this drawing, but the area around the base of the thumb iskind of a mid tone. Or an edge shadow, or a bit of both.

This one is pretty obvious, its the, erm, highlights. On this drawing, the mid tone and the highlightsaren’t really differentiated. If I’d done this on toned paper I would have added a few highlights inwhite pastel. Later on I’ll do some on toned paper in charcoal and white chalk, highlights will stand outmore.

Given the fact that the mid tone and highlight are pretty much the same on this drawing, just whitepaper, I obviously haven’t been thinking about it enough.