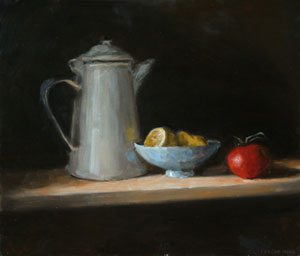 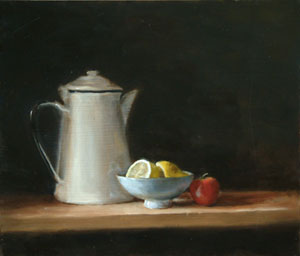 Still life, still life. So bad I did it twice.

This subject was first tackled as my thirdblue/red tonal exerciseon the 30th of October. Thefirst of these two full colour versions was painted the following day,on the 31st. This monumental failure destroyed my confidence so completely that I didn’t paint ordraw for the following five days. I had a lot of work on too, which kept me from getting much easeltime, but whattime I could have spent painting or drawing was spent mostly staring helplessly at the painting andwondering where I’d gone so stupendously wrong.

The second version was done over two days, the following weekend. I just couldn’t let it lie.Although I’m still far from happy with the result, at least I gave a marginally better accountof myself when I joined in battle with this subject a second time.

I’m still at something of a loss to explain why the first one went so terribly wrong. I thinkthat it really comes down to a question of approach. I pretty much steamed in without carefullyconsidering the initial stages. I remember clearly vacillating at the start over how I was goingto proceed. Should I paint all the tone blocks in monochrome first and then lay over the colour?Or go straight in and paint the colours directly? What I actually did was a half way house, and I think thatthe lack of a clear approach resulted in a badly built foundation. More and more I’m realising thatif a painting isn’t built properly from the start, no amount of correcting and fiddling can save it.It’s better just to scrap it and start again.

But I didn’t do that. I beat my head against the painting the whole day, forgetting to eat,painting through a headache and doing a painting version of what my motorbike riding trainer calls”head down arse up”. I think that speaks for itself.

The tomato was a big problem. What, you can’t tell from the way it’s painted? It was the highest chromaelement of the composition, too big, and off to one side. Although in terms of form and tone it worked ok in themonochromes, in the colour version it badly unbalanced the composition. I tried all sorts of fiddlingto try to put it right, completely repainting other parts of the picture, even after the paint hadstarted to go tacky, killing the freshness and taking the life out of the paint. Oil paint doesn’t like to beworked over too many times when it’s wet, something strange and unpleasant happens to it and it losesall it’s charm.

But the real sin came right at the end. A cardinal sin according to my painter friend Beatrice.After the light had finally gone, and I was sitting mulling over the ungodly mess I’dmade in the dim glow of a 40 watt bulb, I went back in and repainted whole swathes of it. That’s bad.Very bad. Beatrice, you’re right. Now I should really know this, you simply can’t paint in crap light,but I just couldn’t let it alone.I couldn’t leave that tomato sitting there like a cartoon stuck onto a painting, and I kept fiddlingand diddling, bringing down the tone and the chroma until I’d completely killed what little freshness wasleft. I made a bad painting worse.

All this was not helped by the fact that I had problems with the primer. This goes back to theidea that a painting must built on solid foundations. I decided it would be fun to try outsome oil primer I’d got hold of recently, a change from my usual Robersons acrylic ‘gesso’ primer.As usual, I was painting on an MDF panel. I’d primed it twice with the oil primer, sanding after each coat,and toned it as I usually do with a brunt sienna and ultramarine alkyd mix, thinned down with turps.

At first, the surface appeared to be very nice to paint on. It wouldn’t take the charcoal for the initialdrawing out, being somewhat smoother than the acrylic primer and with less tooth, but the real problems startedcoming after about an hour of painting. I’d laid in the background with raw umber mixed with 50/50 turpsand linseed oil. Within about 30 minutes of the paint hitting the surface, it started to sink in.

Sinking in is caused by too absorbent a ground literally sucking the oil out of the paint, leavinga patchy matt finish. It looks bad. I kept on throwing on more paint, and it kept on sucking the oilout of it, so what I ended up with was thick layers of dried out pigment stuck to the panel. WhatI should have done is sealed the panel first with rabbit skin glue, and it probably would have been fine.The next time I try this primer, I’ll do that, because it did feel like a nice surface to paint on.

Put together the bad priming, the lack of a plan and finishing in bad light, and you could sayI screwed the painting up, to put it mildly. I screwed it up more than something which is veryscrewed up indeed, and that’s pretty screwed up, as anyone whos ever screwed anything up that badlywill tell you.The funny thing is that I thought I’d saved the painting with my endless fiddlingunder the 40 watt bulb, until I got up the next morning. Horror and damnation! What an unsightly mess!I was devastated, far more than I should have been. For five days, I didn’t go near the easel. Thefollowing weekend I came back for another go. I wasn’t going to be beaten by a coffee pot and a fewbits of fruit.

The second attempt was conducted with considerably more care and attention than the first.Day one was taken at a fairly leisurely pace, drawing out and blocking in the tones over asix or seven hour period with raw umber and white. I guess you could say it was a grisaille, althoughI had no intention of glazing, I just wanted a solid tonal base to work from the next day.

On day two, I covered the now dry tonal rough out completely with fresh paint, adding the coloursslowly and deliberately and trying not to overwork it. The tomato, which had given me such troublethe first time, was replaced with a smaller version andmoved into shadow behind the bowl, only the very top having some direct light on it. It helped, butthe painting still looks better without it. Another lemon or two would have been better there.

But thissecond attempt was largely an exercise in recovering some self respect, and it went some way towardsachieving that. All the same, I really should have left this subject as the blue/red tonal exercise it wasintended to be, and moved on. Which I now have, with a new series of tonal still lifes in raw umber andflake white. Writing this out has been somewhat cathartic, too.Although I’m still less than happy with the finalresult, I got what I suppose they call in psychological circles ‘closure’. I’d put this one to bed,finally, and could get on with some proper work. Which is what I really should have done in the firstplace.