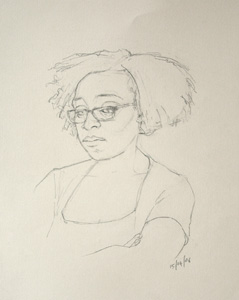 Something just felt right about this drawing, it almost drew itself. I’ve noticed that when I dosomething at the better end of what I’m currently capable of, it seems to come easy. When Ido somethingweak, I’m usually trying too hard. it’s the flow. Maybe it’s a further shift into right brainmode. Maybe it’s a temporary shift into Zen being in the now, as-it-is, or something. Maybe it’swhich way the wind is blowing that day. Whatever it isI wish I could turn it on and off at will.

This is the best likeness I’ve got of Michelle, ironic because she very rarely wears her glasses.Long hours at work have been wearing her eyes out lately. It was nice to draw her wearing this top,she was wearing it the night we met. That means she’s had it twelve years. I probably shouldn’thave said that.

Once I’d got this drawing somewhere near this point, I started adding shading. Bad news. Immediatelythe drawing started running away from me so I took it out. Try again, took it out again. In the end Idecided that shading was screwing up a perfectly nice drawing. Also it struck me that I’d be betteroff just concentrating on line for a while. I’ve noticed thatBargue could make form appearpurely through line. I’ve also gained a healthy respect for the delicate strength andexpressive power of his line. Mine is child-like in comparison. For the next however long, I’m goingto draw only in line, no shading, until I think my line is stronger.