These sketches are a few more examples of heads based on the Loomis book, ‘Drawing the head and hands’.All these heads have been constructed using Loomis’ ball approach, which I covered in mylast post.

I’ve included a selectionhere to show how much I struggled with getting a reasonable feeling of the form when I first started workingwith his book. Being so used to drawing what I see, working from imagination like this was awkward at first,but after some initial hesitancy the drawings started to improve. I’m pretty sure that in the dimand distant past I used to be a lot better at working from imagination. Somewhere along the way I lost thefeel for it. But these drawings do seem to be bringing it back, if slowly. 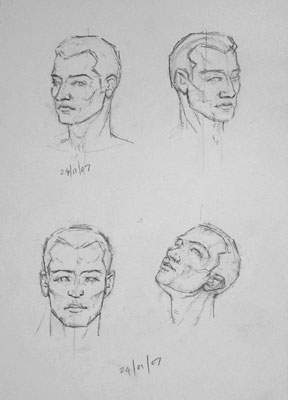 These first four heads were done early on when I started practicing with this book. I can see that I’m stillfinding my feet. The lines are hesitant and sketchy.

One of things I particularly struggled with at the beginning was symmetry. I’m not entirely sure why thatshould be, but it was noticeable to me when I did a few self portrait drawings after this point how asymmetricalmy self portrait drawings were. Improving the symmetry considerably improved the drawings. They say that symmetricalfaces are more beautiful. Well, my face is anything but symmetrical. One ear sticks out more than the other. My noseis squashed over to one side. My top lip is higher on side than the other. I’ve had to give up on my dreams of amodelling career, but my face is certainly not quite as lumpen as I’ve been drawing it. 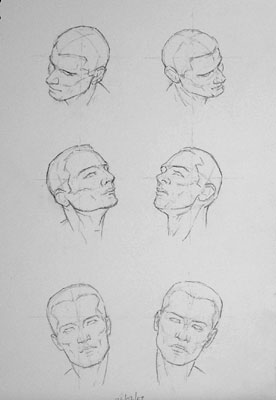 Another six heads from a bit further on through the practice. I’ve started to draw mirror images of each headnow, it seems to help with getting a better feeling for the form. It’s just struck me that another good way topractice this would be to draw the same pose from both sides. Loomis says that you should be able to feelthe side of the head that you can’t see. I’ll try that soon.

It’s just struck me as I’m writing this that it should also be a good idea to draw the headstransparently, as if they were made of glass. Actually, that’s a bloody good idea. I’ll definitely try that one.

The drawings were starting to look a little more confident at this stage. Some of the forms are undeniablywrong, but a greater emphasis on the central line seems to be helping with the balance. 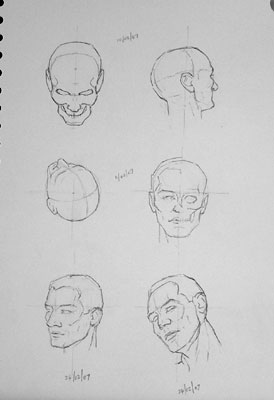 Loomis stresses the importance of knowing what’s happening beneath the skin, in particular the shape of theskull. Much of the visible shape of a head is determined by the shape of the skull, so these drawings, copieddirectly from the book, emphasise this.

Hopefully you can see fairly clearly here how each head has been built up from a flattened ball which formsthe cranium. 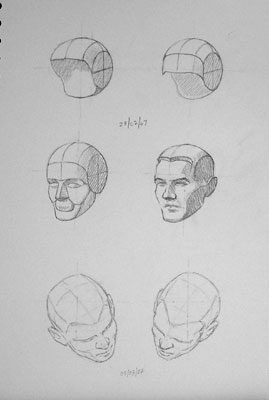 The first four drawings here are also copied directly from the book, and show another way of building up theform. Loomisdoesn’t dwell on this too much, and seems to be introducing it simply as a viable alternative. He’s building theheads out of shaped blocks, but still starting with the basic flattened ball shape.

The two drawings at the bottom aren’t connected particularly with the other four, and are built using the usualmethod. But it shows that it ought to be possible, with enough practice, to draw a head from any angle, entirelyfrom imagination. It strikes me that if you could do this, you would have a very good general knowledge of theform of the head, and the way it sits on the neck. I’m hoping that by the time I get a little further through thisbook, I’ll be able to do just that. By that time I’ll also have covered the main planes of the head (which willbe the next instalment in this series), perspective as applied to the features ofthe face, the skull in more detail, and the muscle groups of the face.

What I hope to gain from this is a morethorough understanding of the construction of the human head, which should translate into stronger portraitdrawings.