Two weeks into the new routine now and I think I might be starting to adjust. My ‘practice time’ spreadsheetis looking a little healthier this week at nine hours (last week was six) so things are heading in the rightdirection. Not quite the twenty I’m aiming for still, but I’m accepting now that it’s going to take a little whileto build up to that. Encouragingly, I wasn’t completely wiped out this weekend and managed to get a bit of drawingdone today along with setting up a new still life.

For today’s drawing session I got out my train drawings from the last couple of weeks and set them up on theeasel so I could finish them off sight size. The more I work with sight size the more I’m convinced of itsusefulness. Although it seems to have become synonymous with strict accuracy and the classical approach todrawing, it needn’t be.

As soon as I set my drawings up and stood back from them, with the originals beside them, mistakes in the largeshapes jumped out at me. Errors which are hard to spot when you have a drawing on your lap become screamingly obviousfrom a distance. Perhaps it’s partly due to the fact that the details aren’t as obvious when you’re standing well back(about six feet or so for me) but I think it’s more to do with the fact that both the original and the copy falleasily into the focus area of vision. It’s much easier to compare and the overall impression takes over fromthe detail. I think this effect is the most important one in sight size work, whether you’re working for perfectaccuracy or not.

At its root, I think this is what sight size is really about. Darren Rousar over atsight-size.com will tell you that it’s a philosophy of seeing, not a measurementtechnique. I think it’s easy to forget that and to become wrapped up in the details. It’s an approach more than it’sa technique.

It seems particularly apt that I finished these drawings off sight size, since Sargent himself is one of the mostfamous proponents of the approach. Although he apparently did these portrait drawings with the paper on his lap, he’dalready been working sight size on portraits for many years. I’m sure that will have influenced how he worked even whenhe wasn’t drawing sight size.

The thing which has struck me most whilst I’ve been copying these drawings is how much Sargent simplifies. Large areas ofthe faces, the planes in the light, are often left with no drawing on them at all. There must have been many nuances of toneall across those areas, but Sargent has simplified, paring these drawings down to their bare essentials. His portrait drawingsare a lesson in economy. They’re not without subtlety however. The half-tones are often no more than a whisper of tone acrossthe paper, and I must say it’s stretched my ability to handle a pencil to get such fine gradations.

The technique I’ve beenusing is to hold the pencil right at the back, the opposite end to the point, very loosely. By gently resting the point on thepaper, laying it sideways and drawing from the wrist, I managed to come perhaps somewhere near the subtle tones of the original.But what’s really surprised me is how much those light whispers of tone can mould the form, how much difference theymake to the feeling of form in the drawing.

First up today is the copy of Mrs. Swaim I started last week. This drawing suffered a little from having one of our catsscrabble about on it, leaving smudges and paw prints all over it, but I pulled it back as best I could: 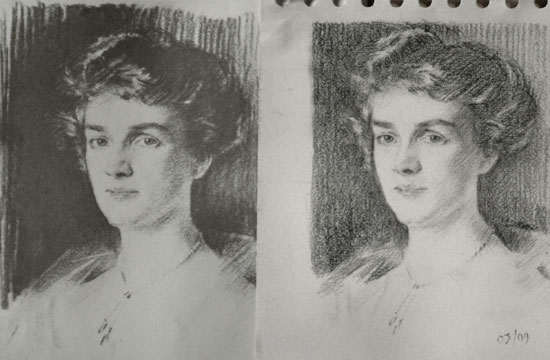 Lots of mistakes in this one, particularly down her right cheek and eye, and I’ve lost the form of her left cheek.

Last week when I posted I’d just started the drawing of Myra Hess. I did some more on this one onthe train, and finished it today. I think I did a little better with this one. Of all the drawings in the Sargent book, thisone has always fascinated me. There’s something about her expression. She seems to be half-smiling, but also slightly sad. Shehas an almost quizzical expression, as if she’s trying to size the viewer up and there seems to be a deep intelligence abouther. Apparently she was a British pianist who was famous for putting on concerts during the second world war, playingthrough the blitz. 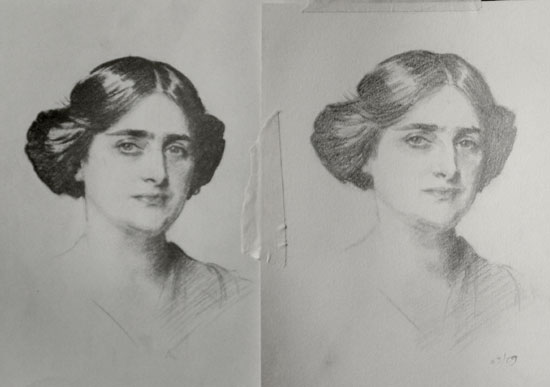 The last one today was started and finished this week. I have to say I really struggled with the profile on this one. PerhapsI should have started it sight size and finished it on the train instead of the other way round. The chin recedes too much andthe nose is too long: 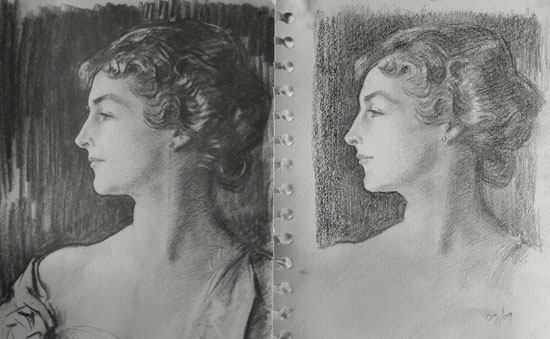 I’ve really enjoyed these drawings and they’ve been a great way to keep my hand in without doing anything too strenuous. I findthe morning commute, which is about an hour and fifteen minutes, seems to flash by as I sit drawing in a little bubble of concentration.I even managed to do a bit of drawing standing up on the train this week. Not easy, but just about possible.

I’ve also been thinking a lot about different approaches to drawing. Drawing is always an abstraction of reality, more thinking thananything else. What an artist chooses to leave out can be as important as what’s put into the drawing, but there are also many differentways to approach the same problem. The last two drawings I’m posting today are also copies, done on the train and finished sight size laterat home, in the same way as these Sargent copies. What I think is particularly interesting about them is the different way that similarsubjects have been handled. 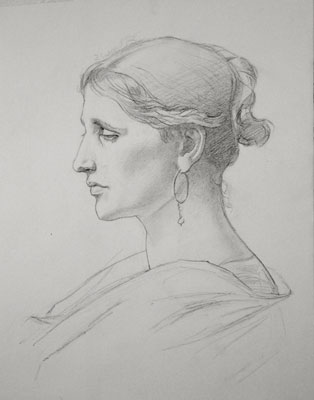 Both are heads in profile. The first is a copy of a Bargue drawing (from the Bargue Drawing Course),and is a combination of line drawing and tone, with a stronglystated outline down the profile. There’s no difference in value between the face and the background, only the outline shows the edge ofthe form. It’s an abstraction of reality. The drawing is also very graceful and highly idealised, full on classical beauty.

This drawing was a real struggle to copy. The subtlety with which Bargue draws is a never ending source of amazement to me. Had I notembarked on the Bargue drawing course I would have little appreciation of what a superbly skilled draughtsman Bargue really was.

No matterhow I tried, I couldn’t match the original for subtlety of tonal gradation and line. Actually, I didn’t even get close. Those of youwith a copy of the Bargue book will be able to check this against the original and see for yourselves. And I really, really tried. 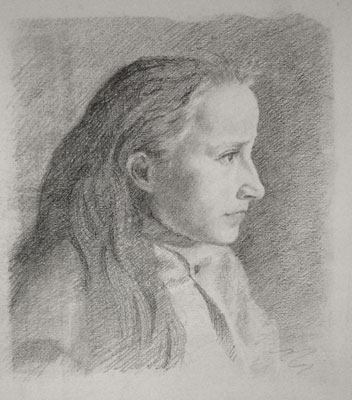 The second is a copy of a drawing by William M. Harnett. Harnett is much better known for histrompe l’oeil still life paintingsof violins and such, and his approach is very different. Instead of the classical grace of the Bargue drawing, he stresses a much more realistic, moretrue to life approach. He’s more concerned with the individuality of the sitter than with an ideal, this is a portrait and he’s much morerealist than classical.

But despite being more concerned with the optical effect than Bargue, this drawing is still an abstraction of reality. If you’d asked me acouple of years agowhether I liked realism more than classicism, I would have said the former without any hesitation. Philosophically I suppose I still leanthat way. Buthaving copied a few of the first plates from the Bargue drawing course, and having copied the drawing above, I’ve come to appreciate classicism muchmore. It’s a different way of thinking about drawing and painting, and whilst it’s apparent ties to the establishment and the nineteenth century artelite might make it unpopular in these more democratic times, it really requires just a little more effort and familiarity to appreciate I think,much like classical music.

There can’t be a better way to gain that appreciation than to copy the work itself. Copying a drawing makes you think about every line, youwonder what the artists were thinking at each point, what their concerns were and what they were trying to achieve. And in the case of Barguein particular, I’ve personally gained a new found respect for the sheer level of skill that went into his work. That’s been the most useful thingabout these train drawings for me. Of course I get to practice judging shapes and distances, I stretch my ability to see, but I also start to getan idea of how Sargent approached his subjects, what he looked for and emphasised. I’m itching to do some real world portrait drawing now, sohopefully I’ll be able to find some time to start doing some self portraits again. Maybe I can get Michelle to sit for me again sometimes atthe weekends.