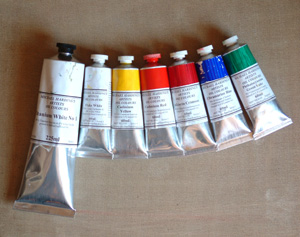 This paint comes highly recommended though. Michael Harding’s oil paints are hand made, apparently he taught himself how to make paint when he was at art college, his web site gives the impression he enjoys his work. Unfortunately, his list of big names who use and recommend his paint is like a shortlist of my least respected painters. It almost put me off the paint. For God’s sake, David Hockney! I still haven’t forgiven him for that bullshit book about old master techniques, even though he’s had to retract his statements to the point where they’re meaningless, my local Ottakars bookshop still stocks the book, spreading misinformation, and David is still profiting from sales on it. Career flagging a bit was it David?

I digress. Let’s be honest, this paint is a complete indulgence. If cavemen could do good drawings on their cave walls with a lump of charcoal and spit and whatever else they used, I’m sure I could have managed with Windsor and Newton. I do think it’s worth using the best materials you can get though, even when you’re learning.

A violin student will play better if they learn on a good instrument. I guess you could argue that they’d be buggered if they ever had to play on a crap one, but I’m trying to justify spending obscene amounts of money on a few tubes of paint to myself, so I’d rather you didn’t.

So what’s it like to paint with? It better be good right? Well, let’s be clear, I’m not a skilled painter by any stretch, and this paint should really be evaluated by somebody with the skills to do a good job of it. I’ll confine myself to my general impression.

I think this paint is lovely to work with.

I was almost disappointed when it came out of the tube that it didn’t look any different. I expected it to be mixed with gold or something. It wasn’t until I started mixing my first colour that I noticed a difference. Compared to Windsor and Newton oil paint it feels slightly stiffer, more solid, but it flows more easily, it seems more – elastic somehow.

I can’t really speak for the colour too much after only one painting, but it seems rich. The colours I’m using now are not really a straight swap for what I used with Windsor and Newton Colours. For a start, there’s no Windsor green, so I got what I thought was the best match, phthalocyanine green lake. So far it seems to be pretty close in use to how I used the Windsor green, which is to mix with alizarin to get black. At first I thought it wasn’t as deep, but I ran a side by side test by mixing some alizarin first with this phthalocyanine then with Windsor green, they looked pretty much the same. It got me thinking, so I got out some ivory black and mixed up some. It looked less dark than either of my alizarin/green mixes. Definitely don’t need black then.

I thought everybody knew that. Phthalocyanines are a group of dyes discovered in the early 20th century with strong pigmentation properties. The name comes from two Greek words, naphtha, meaning ‘dark blue’ and cyanine, meaning ‘from mineral oil.’ It was first introduced in 1935 as a dark blue called monestial blue, the dark green shades coming later in 1938. It’s made by a chemical process whereby the phthalos form complexes with a copper or nickel atom. So now you know, and so do I. The Information Superhighway, for all it’s shameless greed and grotesque warts, is still a wonderful thing.

Back to the paint. There’s no cadmium yellow pale in Michael Harding’s paints, so I went for straight, full pigment cadmium yellow. If I’m only using a few colours, and mixing those to get every colour I go for, then it makes sense for me to have the cleanest, purest colours I think. Likewise there was no cadmium red light, so I went for straight cadmium red. I’ll only be using that when I need the cleanest, most intense reds anyway.

Otherwise, all is the same. Alizarin, ultramarine and white. I got both flake and titanium white, because I don’t know the difference between them so I’m hedging my bets. On the tube is says that titanium white has more covering power.

Apparently titanium is the most opaque and best covering of the whites, reflecting the most light. When mixed with colours, the main use of white paint, it produces the lightest tints, and is recommended for alla prima (one sitting) and direct painting approaches. Good job I got a big tube. Flake white from the sound of things is less bright, but quicker drying, and useful for underpainting because of this. Cool, I learned something else. Interestingly, the Gamblin site points out that on an average painting, the paint will be one half to two thirds white, so stinting on the quality of your white is a bad idea. 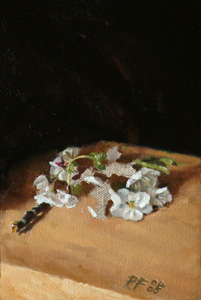 Here’s a pic of the first painting done with the new paints. It was a pleasure to paint, despite failing light and gradually wilting cherry blossoms. I think the paint looks better applied, like I’m a better painter than I am, but that could just be me justifying what was basically a shameless indulgence.

I don’t care. Getting these paints out instead of the old Windsor and Newtons got me exited, looking forward to painting with them. I’m not sure that on it’s own is worth a hundred quid though. More on these paints as I do more paintings with them.