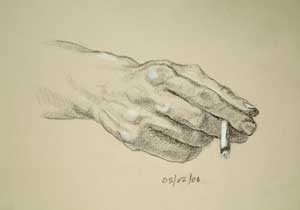 This is the first hand drawing done with the new conte graphite pencils I got the other day. I just can’t goon enough about these pencils, they make such a difference to quality of the drawing. I’ve prettymuch covered them in thecafe sketches page (scroll down to the bottom,)so there’s no need to repeat myself here, suffice to say that if you’re using cheap pencils (or cheap paper)for drawing, you’re doing your work a disservice.

I’ve been meaning to write something about how I light the subjects for these drawings,but keep forgetting. Its an important consideration, especially when you’re learning. The main pointis to use only one light source. That way you have clearly defined shadows to workwith, and the physicality of the form is much easier to achieve. Trying to work with more than one lightsource confuses the tone blocks and makes the whole thing both harder to see and harder to renderconvincingly.

Since a lot of my drawings are done in the evening by electric light, I use a single lamp (currentlywith a 60 watt bulb but I need to change it for a stronger one,) which I can move around easily. OnceI’ve decided what I’m going to draw I then try the lamp in various positions until I get a nice playof tones which defines the subject clearly.

For instance, here I placed the lamp slightly higher thanmy hand and off to the left, (the right as you look at the drawing since this one was done in the mirror,)which put the last two joints of most of the fingers in shadow. This helpsthem to recede away from the viewer and makes the directions of the main planes more obvious, helping tocreate a stronger feeling of the form and a better drawing.

A tendency I’ve always had in my drawing, going right back to my art college days, is to lose thedefinition of the main forms when I start to work into the detail of the shadows. I was conscious of thatin this drawing, and made an effort to keep the main tone areas clearly defined as I worked more variationinto shadows. This also can make a big difference to the strength of a drawing.

I’m happy with this drawing. There’s a problem with the thumb, a failure to observe it correctly,but I’m happy with the way the rest of it has come out. It struck me while I was doing it how much moreI’m enjoying drawing now. I guess that’s partly because I think I’m getting better now, getting somestrength back into my drawings, but also I’m starting to relax more, to feel less pressured. That I thinkis the main value of these small studies, there’s no pressure to produce a finished piece for framing andsticking on the wall. Its kind of liberating. 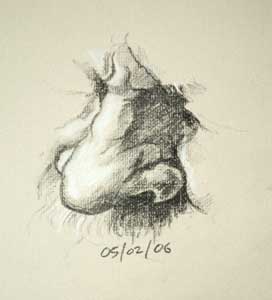 When I was hunting through my various art books looking for a nose to copy, an interesting thingstruck me – most artists in the past have devoted much less time to the nose than to the eyes and the mouth.I guess this is because eyes and mouths are much more responsible for defining the likeness and the expressionof the sitter than the nose, so I suppose the nose is a kind of ancillary back-up element in creatinga likeness. There weren’t that many noses that struck me as being worth copying, largely because themajority were fairly simply drawn.

This is a copy of a nose by that master of detail,Albrecht Durer.It’s taken from a drawing of a ninety-three year old model. What a hooter.

Because of the dearth of detailed noses in my art book collection, I’ll probably be doing most of these nosedrawings from life. I think the main approach here will be to draw them from as many different angles as possiblein order to get to know the anatomy of a nose well.