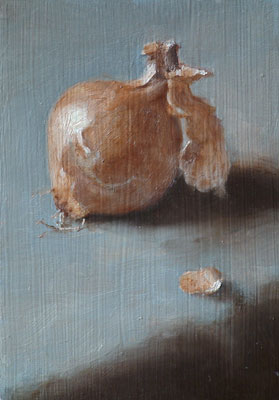 This is the fourth in the series of ulramarine blue/burnt sienna studies. I used the burnt sienna moreas a local colour in this one, since it’s a pretty good match for the colour of an onion. Althoughthe cloth that the onion is sitting on is grey, I put in quite a lot of blue. Although I don’t think it’sworked, I did it firstly to emphasise the cool light, and secondly to see if surroundingthe onion with blue would make it appear warmer. Maybe it did, I can’t really judge that withouthaving similar one with a grey background next to it.

Using the blue to show the cool light didn’t really work, it came off more as a local colour that anything.I think I know why that is though. I’ve been banging on a lot lately about how a picture must have it’s ownlogic, both in colour and in tone, it’s own laws if you like. If this logic isn’t applied consistently,the effect fails. For example. if I painted most of the shadows in a painting brown, and then painted one blue,that shadow wouldn’t work. It would also, I think, destroy the logic in the rest of the painting andoverall, the illusion of physicality and light would be weakened.

The blue light on the cloth doesn’t work as it should here because it hasn’t been applied consistently.The lights on the onion aren’t blue, they’re burnt sienna with varying degrees of white added. That’s whyI think the blue on the cloth reads as local colour and not as light.

There are also some mistakes in the relative tones of the main shapes in this one. I got caught upin the onion, with trying to get the sienna as close as I could to the actual colour of the onion.Unfortunately, that meant I took my eye off the ball with the tones. I did a lot of fiddling with the shadows atthe end of this one, sometimes darkening them and sometimes lightening them, but nothing seemed to makethem work any better. That’s a pointer to the fact that there’s something wrong with the relationships ofthe tones overall. The onion itself is too even in tone, the shadow and the light side are not sufficientlydifferentiated. I think that’s probably the source of the problem, and the reason that I couldn’t getthe shadows to sit right.