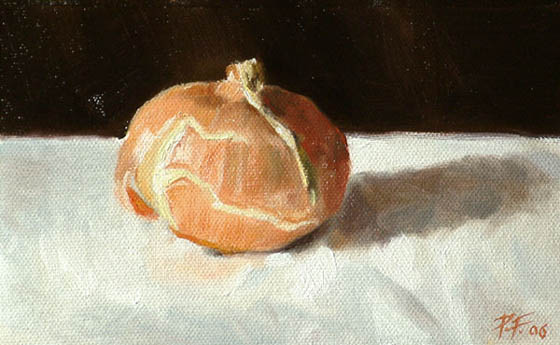 It’s almost three months to the day since I did a painting, the last one was the Two Pomegranates on the 4th ofDecember.

So it’s a bit of a surprise to me that this painting came out ok, in fact from the start it seemed to go easier than I remember finding it before. I must admit, I had a moment of panic when I came to mix the first colour (the dark brown for the background) but once that was in it seemed to go fairly smoothly.

I used a very different set up than usual. On all the other paintings, I’d be sitting down with my easel about six or seven feet away from the subject. This time I had it almost level with the onion and I painted this one standing up. So why the change?

Well, I’ve been doing quite a bit of reading up around the web over the last couple of months, especially about classic 19th century atelier training. I’ve learned that in an atelier (another word for a studio where the master trains a few pupils as well as producing his own work) a student would be expected to spend the initial part of their training copying drawings. Once they’d done that until they were pretty sick, they’d be allowed to go on to drawing from casts of classical sculpture. This rigorous training would give the student knowledge of line and tone before they even looked at a paint brush.

My aim since I started working again has been to train myself properly, to draw and to paint, and fill all the gaps in my art education. Because of that the classic atelier training has a kind of fascination for me. Whilst learning about how the copies and cast drawings were done, I came across something called “sight size” drawing. It’s too complex to go into here, I’ll describe it in detail when I come to do my first real sight size drawing, but it basically entails drawing something exactly the size you see it. So if you place your easel level with your subject, you should end up with a piece of work exactly the same size as what you’re drawing.

With this approach, you would usually be standing well back from the easel, say eight or ten feet. This would allow you to spot any differences between your work and the subject, since you would have both in your field of view at the same time. Sargent used to paint this way. He’d have his easel over by the sitter while he stood well back. He would spend a long time just looking, then would dash over to his canvas and paint what he’d just seen – without looking at the sitter again or checking his work until he was back in his spot for observing.

I used a watered down version of that for this painting. 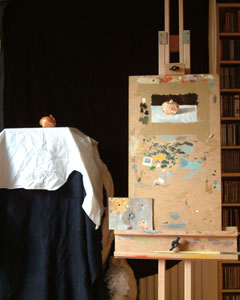 As you can see here, I have the easel placed right next to the still life set up. Unfortunately my camera tripod doesn’t go any higher than this, so it’s difficult to get the same eye-view that had as I painted this, but you get the idea. I didn’t do the painting from back here though, I was standing at the easel the whole time, which is where I departed from the classic sight size approach, but nonetheless I still found it much easier to look from the onion to the painting and see differences. I painted the onion actual size, which was also the size it looked from where I was standing.

I didn’t do any measuring, which is a major part of proper sight size drawing. I plan to do a sight size drawing from a cast soon (you can see one I just got off ebay just under the easel to the left) and will write up a proper description of how it works when I do it.

Working this way didn’t feel especially different to how I would usually paint, although there does seem to be something about standing up to work which increases my focus. I’ve found this with the drawings too, many of which I’ve done standing up lately. I have a feeling that having the easel set up like this did make a difference to the end result though. It just seemed to be a bit easier to see properly from that position – perhaps partly because I was a lot closer to the subject which is, after all, pretty small.

What I think has made the most difference though is the amount of drawing I’ve done since the last painting. From the start I’ve been concentrating on learning to see. That’s a skill which I believe the drawing develops just as much as the painting, although I’m not working with colour. I do believe I’m seeing tones better now than I was three months ago. I remember clearly the great struggles I was having with getting the tones right before, especially when I had some white cloth to paint.

There was none of that this time, I just banged in the background, (darkest tone first, remember,) the cloth and the shadow cast by the onion very quickly, almost without thinking about it. Once that was in I pretty much left it alone, apart from deepening the shadow a bit towards the end. What a difference. I remember agonizing over how I could get the highlights light enough, checking and rechecking with my colour checker (which you can see on the easel here). The only reason I can think of for it being so much easier this time is the drawing practice I’ve done over the last three months.

Apart from the easel position, everything was pretty much done the same way as the other paintings. I used my usual restricted palette: alizarin crimson, ultramarine, cadmium yellow pale, Windsor green and flake white. I really can’t see me needing anything else for quite a while, if ever. I truly believe you can make almost any colour you want with just those five, if you try hard enough. I also believe it gives a certain unity to the painting. I’ve dropped black now, since alizarin and Windsor green together make a beautiful deep, luminescent black which can be either warm or cold and has much more life than black from the tube. I used no medium at all this time, no linseed oil, just turps. Obviously linseed oil isn’t necessary to me at the moment, so I’ll stop using it. That wasn’t a conscious decision I made with this painting, I just forgot to get it out.

For my money, this is the best painting I’ve done so far. It has the most life, the most realism, and I think that’s entirely down to the fact that I’ve caught the feeling of the light better than I have previously. I really believe that’s the key to making a painting live, getting the light to feel real. The drawing practice I’ve been doing is helping me to see better, to analyse tone and colour more quickly and that’s translated into a stronger painting. I think that a large part of learning to see is persuading your brain not to drop all the visual information it ordinarily would consider unnecessary for survival. You don’t need to know exactly what colour that onion is to know it won’t poison you. But you do if you want to paint it.

There’s still a very long way to go yet, but this has showed me that I don’t actually need to be painting regularly to be getting better at it, as long as I draw. A lot. It’s showed me that there’s real value in the drawing practice, and that pausing and going further back, stopping painting and concentrating on drawing first was the right thing to do. I’m learning. Of course that also means it’s going to take me a lot longer than I first thought to get where I want to go, but I’ll be the stronger when I do get there eventually. “Unswerving inner purpose brings good fortune in the end.”

This is the first of my ‘ten single objects’ series I set myself to do after my reassessment back at the beginning of February. It felt almost like cheating to be painting again before I’ve done my ‘atelier study’ with the drawings properly, but damn it felt good to be using colour again. And I like my little onion.