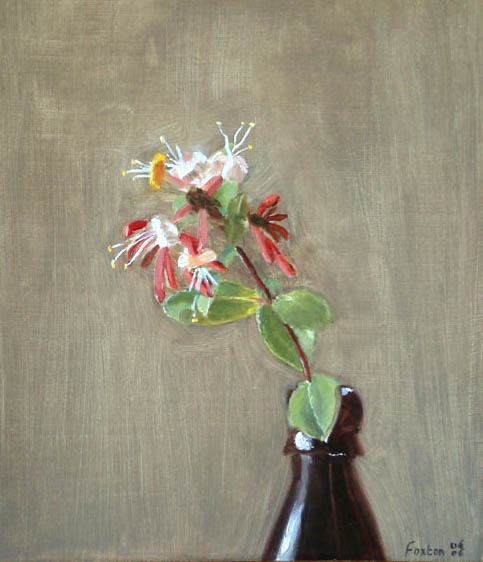 Third of the series of ten flower paintings, this one is an ‘also ran’ for me. I was trying to repeat the way the Orchid came out, with only partial success. Thecomposition and colour are similar, but this flower doesn’t have the architectural interest of theorchid, so didn’t come out as well. It doesn’t work as nicely against that warm grey background either.

The problem with this one wasn’t so much in the painting as in the set up. The background, whichis the white wall of the back of the room I use for a studio in deep shadow, is too close in toneto the overall tone of the flower and especially of the leaves, so the flower doesn’t really come out of thepainting. No matter, another lesson learned. I think it worked ok with the orchid because the colour was sointense on that flower, even with a mid tone background it jumps out. Also I let the background on thisone get a little too dark I think, although I think I matched the tone and colour of the actual wall quite closely.

I was mainly dealing with colour notes and tones in this painting, as I usually do, trying to avoid gettinghung up in detail and concentrating on my eye training. This was a complicated flower though, and I had ahard time stopping myself from getting involved in trying to get the detail of the forms with the drawing.In fact I didn’t really succeed. Originally this was going to be a painting of two gerbers, but they wiltedovernight so I went out into the garden and found this little feller blooming in the corner.

This was another early start, I was up around 5:30 and drawing out the painting by 6. Overall ittook about seven hours, largely because of the complexity of the flower and because I struggled with thebackground. Although I’ve painted exactly this background in the last painting, it took a few goes to getit right this time.

As with the orchid painting, I didn’t tone the panel for this one, working directlyonto the white acrylic gesso primer. It definitely makes the colours more luminous, but it only reallymade a difference on the leaves. There are parts of leaves, where the plane is in shadow, andlight passing through the leaf created a lighter emerald green. Since I painted the shadows as I usually do now,using translucent glazes, all I had to do to create the effect of the lightgreen was to rub back the paint for the shadow and scrub in a little light green.Again, I had trouble mixing the right colour with just ultramarine and cadmium yellow, so I’ve added a lightcadmium green to my palette. The number of colours on my palette continues to grow, but in a natural wayand only where required. Pure tube colours just have a higher chroma than mixed colours, so I need themsometimes for the odd colour note. The foundation is still the three primaries and white though, with the additionof burnt sienna for mixing with ultramarine for the shadows.

For this one I drew the painting out with a round sable, dipped in a mix of ultramarine and burnt sienna, thesame colours I used for the background. I thinned it down with gum turpentine, and then rubbed it back when itwas dry so that the drawing wouldn’t show through the thinner parts of the painting.

Most of the actual painting wasdone with a mixture of synthetic mongoose andreal mongoose filberts, keeping to the biggest brushes I can get away with using to keep from getting hung upon detail too early. The mongoose filberts are rapidly becoming my favourites, I can’t tell much differencebetween the synthetic and the real ones, so either seem to be fine. They have more spring that sables, a bitfirmer, but aresofter than hogs, leaving less of a mark from the bristles and allowing the paint to go on more smoothly. I’mfinding them to be a good all round brush. I’m also finding that filberts are the most versatile,allowing for broad sweeps or fine lines by using the edge.

Since I missed painting my dark red gerbers yesterday, I got a bunch of similarly coloured gerbanas, smallgerbers, for tomorrow’s painting. I intend to give a bit more time to thinking about the overall colourscheme of the painting tomorrow, including how the flower relates to the background from a tonal point ofview. We’ll see what happens.