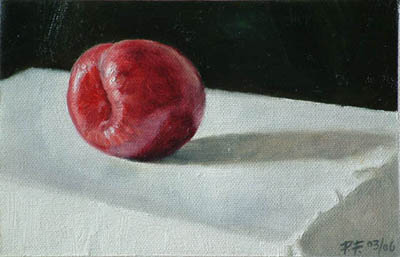 This painting was a struggle, and I’m not very happy with it.

What I am very happy about is that I made a discovery about something that I’ve been struggling with in many of these little still lifes, this painting taught me something.

That’s not the discovery, I’ll get to that in a minute and you can have a good laugh at my expense when I do, so please bear with me.

Colour is made by light reflecting off a surface, get the colour right and that should go a long way to creating a convincing feeling of light in the painting. Well that’s what I tell myself anyway, so I spend a lot of time when I’m painting trying to match the colours I see in reality.

I’m still using my little colour checker, a piece of card painted grey with some holes punched in to isolate colours with, largely because I don’t trust my eye to do it on it’s own yet. It gets it wrong too often. By looking through the colour checker and painting little dabs of the colour I’m trying to match around the edges of the hole, I hope to get nearer to the colours I see in nature. It seems to help.

But when I painted this plum, I got something very wrong, I painted it facing the window. That meant that although I had nice, full light on the plum, my canvas was in full shadow. It also meant that the surface of my colour checker was in shadow, and therefore my little dabs of paint on it were too.

Everything was going along fine to start with, I blocked the background in (a dark off green, vaguely complimentary to the off red of the plum) and started on the cloth. I’ve struggled badly with white cloth in the past, which is partly why I include it so often now. I remember using the colour checker to get the tone of the cloth in the right fore ground, where it’s in shadow. I put it in, at least what I thought it was, but it looked way too light on the canvas. I decided to stick with what the colour checker told me though, because the colour checker doesn’t lie. Much.

The further I got through the painting, the more it became obvious to me that something was off. I was having real trouble getting my white paint as light as the highlight on the front of the cloth. Why? I couldn’t understand it. Surely white paint is as white as it gets. I was thinking maybe that there was some kind of glow the cloth was giving off, like a light, and paint wasn’t capable of catching that. I started darkening the shadows on the cloth so that they would work relatively to make the front of the cloth the lightest part of the painting.

To further complicate matters, the light was quickly moving round the room, and the sun had come out. Bugger. When I started the plum, I painted it’s darkest tones on the right first. When I came to paint the front of it, it was in full (albeit late afternoon) sunlight, and it didn’t gel with the shadows. I knew the painting wasn’t really working, but I wasn’t sure why.

It wasn’t until I finished the painting and was sitting around wondering what had gone wrong that it struck me that my canvas was in full shadow. Of course I couldn’t match the white of the cloth, my white was in shadow so it appeared a lot darker to me. When I was using the colour checker, I was putting the tones down much lighter than they actually were because my dabs of matching paint were in shadow and therefore appeared darker.

What an arse I am. It seems so obvious to me now that I’ve realised it. It was also exactly what threw me on the lemon painting before. I remember when I set that still life up I thought it looked nice with back lighting from the window, but of course that meant that I was in exactly the same situation I was in with this plum. It’s only taken me, like, four months to realise what was up. I suppose that’s one of the disadvantages of teaching yourself, but at least I’ve learned that particular lesson VERY well. Now you can have a good laugh at me sitting there with my little colour checker, looking all bewildered trying to figure out why it didn’t work.

If I’m going to try to match the colours in nature this way, it’s a much simpler task if I have the same light falling on my canvas and my colour checker as is falling on my still life set up. Simple is good, complicated is bad. 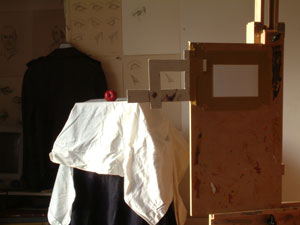 Here’s the set up I used for the plum, you can clearly see that the canvas is in full shadow. So of course I won’t be able to visually match the value of the front of the white cloth with my paint, since the paint is in shadow.

A couple of other things are worth mentioning too, small changes to the method: Again I’m working right up next to the plum. This really does make things easier, and I can stand back (as far as I can in my little room) and compare the colours of the subject with the colours on my canvas.

You’ve probably also noticed that little frame thing taped to the side of the drawing board. I’ve already been using this little framer to help me decide on compositions. Having it taped up there means I can look through it and see exactly what it is I want to paint. It helps to isolate the colours and to compare my painting with reality. I also mark centre lines on each inside edge before I start, which helps with the laying out. Michelle isn’t sure about it, she thinks it might be cheating. I don’t care. 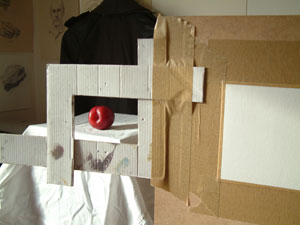 You can see here pretty much what I saw when I was painting in this picture, or the camera’s version of it anyway, with all it’s inaccuracies of tone and colour. Regardless, it’s pretty obvious how it can help frame a composition and see tones and colours more clearly.

I took this picture before I started. It wouldn’t have been too bad if I’d left it in this position, since it does have some light falling on the canvas, but I moved it round to paint because I was concerned that the framer would create some perspective distortion in the painting if I didn’t have it flat on to the plum.

So although I set everything up entirely wrong for this painting, at least I realised it finally. It’s obvious to me now that I’ve been having problems with this from the start, to a greater or lesser extent depending on where my easel was in relation to the window. It wouldn’t have had half so catastrophic an effect if I wasn’t sticking grimly to my method and using the colour checker. But I believe the most important thing for me now is to be able to see colours as they really are. Until I can do this I don’t think I’m justified in changing them, for whatever artistic purpose I might invent. I want to learn from nature first.

I’ve said before that I believe we learn more from our failures than we do from our successes, that’s certainly the case with this painting. The disappointment in the painting was tempered by the anticipation of setting it up differently next time, I was itching to know if I was right.