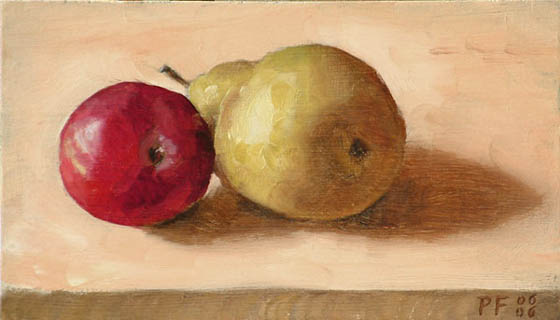 Fourth of the ten pairs of objects series. I’m gettingthrough this series much faster than the last one of ten singleobjects.

After the last painting, theTwo Braeburns,I wanted to do something with less heavy chiaroscuro. I wanted to see if theapproach I’ve started using with warm translucent shadows and opaque painton areas in full light would work with less dramatic lighting. The lightis basically the same in this painting, from the same window at the sametime of day in similar weather, but I haven’t controlled it this time,it’s just falling flat on the still life.

This painting went unbelievably quickly. Recently, my paintings haveall been taking about six hours to do, but the braeburns only took fourhours and this one took a little under three hours. It’s not that I’mrushing them or painting faster I don’t think, the only thing that’snoticeably changed about my approach is drawing out the paintings first,at least stating all the shadows, in thin, translucent monochrome first. 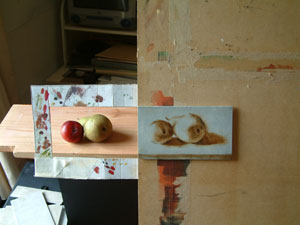 Here’s the painting at this initial stage, roughing in the shadows witha thinned mix of ultramarine and burnt sienna. Like the last painting,I’m using Roberson’s maroger medium, mixed in roughly equal quantitieswith the paint.

Although I’m working sight size, I haven’t been very careful with thedrawing on this one, usually I try a bit harder to get the forms right.Although I do think the painting suffers a little from bad drawing ofthe forms, my main concern is catching the light so I’ll let myselfoff on that one, for today at least. But if I do it again I’m goingto have to have strong words with myself about it. I might even have tothreaten to throw myself out of my atelier, I expect better than thisfrom myself by now. MonsieurBargue,would not be impressed. 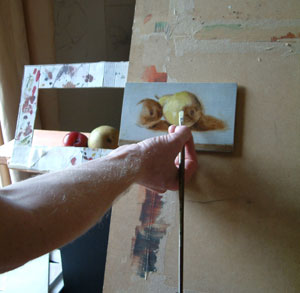 My first ever action shot! Michelle took this while I was painting.What I’m doing here is the next stage after the shadows have been roughedin, applying thicker, more opaque paint to the planes of the pear thathave full light falling on them.

This is exactly the same approach as I used for the braeburns. It reallyseems to work. Sometimes when I do a painting I’m happy with, like the braeburns,I worry that it’s just a fluke, that I hit something out of luck, and I won’t beable to repeat it. Thankfully, I realised at this stage of the paintingthat it wasn’t the case this time, this approach really does seem to give morelife to the painting. Just likewith the braeburns painting, I had the distinct feeling that I was watchingsomeone else paint, someone who was better at it than me. 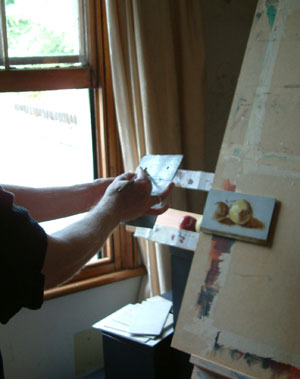 When I get to this stage, I fall back on my colour checker to helpme get the colours right. This shot, (also taken by Michelle,) shows howI use it. I want to match the colours I can see as closely as I possibly can,because I believe that’s the best way to catch the light. As long as I’mworking in controlled light conditions like this, I should be able to paintevery colour I can see, close if not exact.

The colour checker is justa piece of card I’ve painted flat grey, which has a few holes punched in it.looking through the holes in the colour checker, blurring my eyes, I canisolate the colour. I paint little dabs of the colour I’m mixing next tothe hole I’m looking through to match the colours better. It’s crucialto make sure that the same light is falling on the colour checker as isfalling on the objects though, or the colours will not be right. That’s whyI’ve got it angled towards the window. Especially when painting lighterareas, unless I have the same light as is falling on the still life, thecolours I mix will look darker, (being in shadow,) and it will appearimpossible to get the white of, say, a white cloth in full light, lightenough. I learned this the hard way. The colour checker can be a greathelp, but, like any tool, if not used correctly it can really mess thingsup.

This shot also shows how far forwards I’ve got my easel raked, it’s atan angle of roughly thirty degrees to the vertical. There’s a good reasonfor this. The little framer, viewfinder, call it what you will, that Ihave taped to the edge of my drawing board is another of my littlehelpers. It helps me to isolate what I’m putting into the picture, tojudge the values of the tones, and to frame the composition at the start.I use it on every one of these little still life paintings I do. Usedlike this, the framer becomes the picture plane.

That can cause problemstoo though, because if the framer is not pretty much flat on between my eyesand the subject, it can create distortion of the drawing when I relatepoints on the still lifeto the edges of the framer, and then to the edges of the canvas, or panel inthis case.That’s why the easel is raked so far forwards. Unfortunately I haveone of those tripod easels with two legs at the front and one leg at the back,and pushing it over like this puts all the weight on the back leg and itbecomes very unstable. I almost had it over a couple times during this painting, Iknew I should have got one of those easels with square legs, now I’ll haveto buy another one.

It’s a relief to me that this painting came out ok, that the braeburns paintingwasn’t just a fluke. I do seem to have progressed somewhat since I started usingthis glazing method for the shadows. But then quite a few things have changedpretty much at the same time on the last few paintings: I paint on gessoedpanel now, with a mid-toned, grey ground. I use medium mixed with the paint.I work sight size. Probably all these things together have helped me makesome progress. When I compare the last two paintings to the earliest ones, theold ones look like cartoons to me in comparison, two dimensional. It’s such arelief to seesome progress. When I started up painting again and my initial attempts werelooking so awful, a small, irrational part of me was worried that I’d lostit completely and would never be able to paint or draw well again, that I’dleft it too late. The rational part of me kept telling me that all I had to dowas practice, practice, and eventually it would come back. How quickly woulddepend on how hard I practiced.

Thankfully, the rational part of me was right. All it takes is practice. I cansee some progress now,although it’s slow and I can’t see it from painting to painting. It’s like watchinga flower grow, you may not notice it happening but gradually, bit by bit, it comesto life.