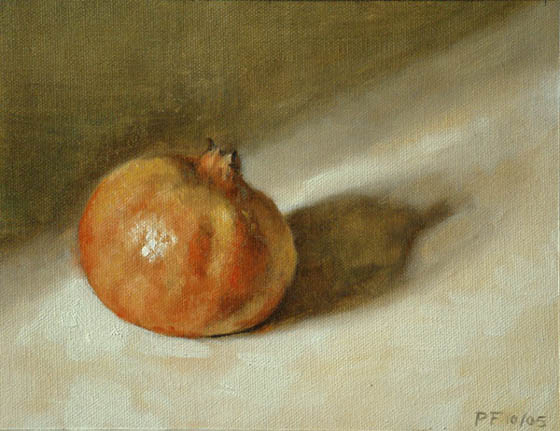 After deciding I’d overcomplicated matters yet again with the second painting (pomegranate and conker), I decided to do a simple single object. It was a good idea, I’m going to do some more of these.

I just wasn’t convinced with the way the pomegranate had come out in the last painting, so I painted it again. The colour is a bit better in this one, but the feeling was growing that I was getting hung up on details before I’d even got to stage one – getting the colours right.

This painting was done on acrylic primed canvas, I painted a mid-tone over the white primer of yellow ochre and raw umber acrylic. Its a good way to stain the ground because it dries so fast. Some of it still shows through on the table top under the pomegranate and in the shadow at the back, so it had a big effect on the final picture. Its why it looks so gentle and harmonious I think. Once it was dry I roughed in the main tonal shapes, again with raw umber acrylic, so I could get straight down to the painting without it bleeding through.

With this painting I was experimenting with washes for shadows and opaque paint for solids. It gives a pretty nice effect in the background I think, soft and deep and luminous. It helps the pomegranate stand out and is a useful technique to file for later use. But its no where near what that shadow actually looked like. I’ve painted something which I thought would look nice for the picture, not what I saw. Three out of ten, must try harder.