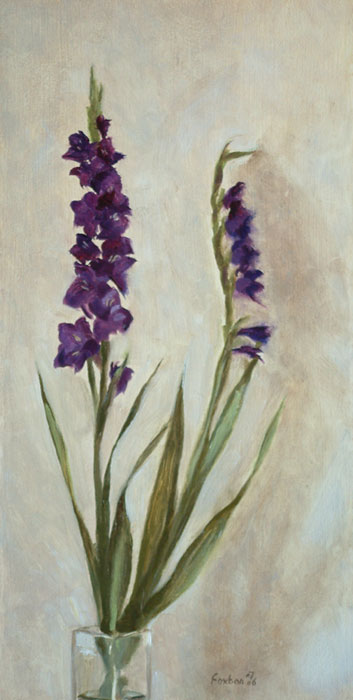 This is the ninth painting in the ‘ten flower paintings’ series.

After theChrysanthemums painting, I’ve had thoughtsof focus in a painting higher in my mind than they would usually be.More lately I seem to be findingmyself doing things which run a bit sideways to the original plan, ‘focus’ is one of those things.

I keepbanging on about seeing, and trying to paint what I see, but it’s not so straight forward as that. I’m thinkingabut how the gladioli on the stalk on the right, in the ‘background’ came out. If they look a bit out of focus,it’s because they are, I kept them vague and blended the edges into the background. There’s nothing cleverabout that, you just paint over them a few times with a dry brush, but it’s got me thinking again about seeing,and the difference between that and painting.

I’ve come to the conclusion that they happen in two distinctactions, grabbing all the information first, then selecting from that what to put in the painting, and how bestto translate it. That might seem pretty obvious, but I’m sitting here thinking about it all the same.

I like the way the flowers in the background came out, it makes the ones on the left stand out more, youreye is naturally drawn to them. They also look to me like they come forward a bit, which is alright, becausethey were closer. But did the flowers on the right look like that? No. So I’d better come clean andadmit to myself that I didn’t paint what I saw.

The background wall is another case of the same thing, it’s laid in with a warm wash leaning towardsburnt sienna and with a lot of turps, and then cooler coloured, more towards ultramarine, neat paint is laidover it in little dabs. The actual wall wasn’t mottled like that, but still I think it works ok in the painting,it helps the light. The funny thing is about shadows, they don’t sit still, and most of the back wall is inlight shadow. If you look hard enough into a shadow, you can see after-images from your eye in it, the lightseems to dance about. I’m wondering if it’s my brain that tells me the wall is flat, even white, but what my eyes seeis an effect of the light, which is why it works alright in the painting (if you accept that it does, of course.)

The thing is, I’ve got this haunting feeling that I really shouldn’t be thinking about this kind of thing yet,I should still be working on colour and tone and painting exactly what I see, at least not using any littletricks. I’m thinking that I haven’t even been painting a year yet since I came back to it, and I’ll be jumpingahead too quickly, something I have a habit of doing. I still need plenty of eye training more than anything else.

I don’t know if I’ll resolve this, I think it’s probably more the ongoing conundrum kind of thing. I likethis painting though, and I enjoyed doing it. I’ve kind of gone back to my translucent shadows and opaque highlights,although I haven’t done it so deliberately with medium. It happens between the warm and cool colours in this one,warm shadows and cool lights.The cool light on the far right of the wall is what makes the shadow of the gladioli on the wall work.

Oh, something I forgot – I sat down to do this painting, I haven’t done that for a long time. I’ve got some nastykidney problem at the moment and my right kidney is giving me jip. I maybe didn’t stand back as much as usual,but apart from that sitting down didn’t make a blind bit of difference.