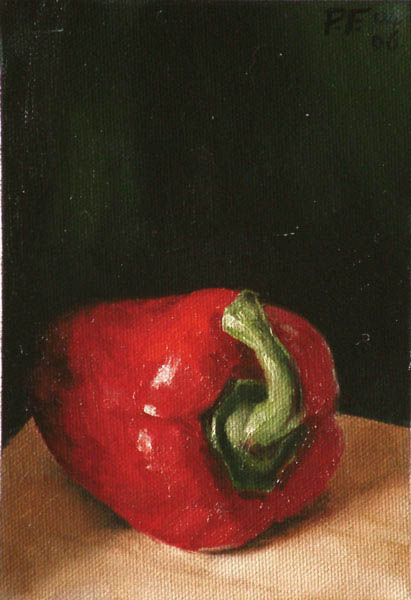 I got this pepper from the butcher this morning while I was buying some pork chops for tea.

I like veg from the butcher because it comes from real farms, it’s a bit more gnarly looking than supermarket veg and it has more flavour.

Today was a fairly good day for light. Although it was raining for a lot of the afternoon and it was a bit overcast, the light stayed quite constant until about six when the sun came out. The pepper was pretty much there by that time, so I took it as a sign not to overwork the painting and stopped.

I used what’s becoming the standard set up now, the pepper up on a bit of wood on my stack of filing cabinets, the easel along side it with the viewfinder taped on the side.

I wanted to do something more with the light today. There’s something very interesting about the way peppers reflect light, smooth shiny surfaces are interesting to paint.

For one thing, I set up closer to the window today. I was still careful to have plenty of natural light falling on my canvas, and I wanted more light on the pepper than I was getting. Then I remembered something I used to do last year with these still lifes, set up a board to cast a shadow over the object. It creates a nice diagonal shadow across the picture plane, and it changes the light across the surface of the piece of fruit or veg I’m painting.

After I’d set up the diagonal shadow across the pepper, I tried a couple different cloths for the background. First I tried the light olive green short silk curtain I used for the pomegranate, but it was too intense with the red of the pepper. After a couple more tries, I settled on a nice dark green throw I found in an Indian soft furnishings shop on the high street the other day. It looked just right. At the back of the pepper where it was indeep shadow,it disappeared into the backdrop and I couldn’t make out the outline. This painting then became partly concerned with finding and losing the outline of the pepper, because the brighter parts stood out sharply against the dark green.

I’ve got into the habit now of doing Betty Edward’s contour drawing exercise before I start drawing or painting. As I was doing it today, I could feel myself slowing down and getting calmer, mental chatter abating slightly. I think it helps.

I took it very easy today, being careful and not rushing. It took me a long time to mix the first red of the pepper. It was worth it though, it looked right when it went on. I spent about five hours on this one, starting like I usually do with the background first. It being such a dark colour was good for this painting, it set up the tonal range straight away.

Next came the light part of the top surface of the wood. I laid this in with very thin, dryish paint, to suit its texture. After it was on I rubbed it back a bit here and there with a cloth, because it was too dark. It came up pretty nice and the colour was close, so I made a mental note not to overwork it like I did with the last painting, the green pepper.

Next the shadows on the surface of the wood. They took a long time to get. I kept mixing colours, kept changing my mind and trying again. When I finally settled on the colour, again I was surprised at how dark it was. I’m getting a bit more used to that now though.

Lastly the pepper. Again, I got some cadmium red out to help with the intensity of the red, but actually I didn’t use it much. I really don’t think I could have got the red right without it though. So I guess I’m settled on a five colour palette, which becomes a six colour palette when I’m painting something bright red.

I’m a bit surprised about how little I painted of the pepper, in terms of detail. I started painting again with the idea that if I could just get the colours right, make the light believable, then the paintings would live without needing detail to make them look real and physical. I think this painting goes some small way towards bearing that out.

What I’m trying to paint here is the light. It just so happens that the light is reflecting off a red pepper so when I paint it a red pepper appears, all on it’s own, if I do it well enough. I think I got somewhere near today, or at least nearer than I was before. It’s a rough painting, the red is laid on a bit too thick and it doesn’t stand up to close scrutiny, but from a distance it lives. If I look at it on the paintings thumbnail page, it’s kind of like seeing it from a distance up against the others. To me it stands out as having the strongest feeling of the light.

I laid off a bit with the colour checker for this one. I used it to get the main general colour of each shape, then trusted my eye for the rest. I’ve got a feeling that using the colour checker too much can hurt the painting. This way I spent more time relating tones to each other after I had the main blocks in. It makes sense.

I had a hell of a game photographing this painting. The camera seems to struggle with intense reds, it usually makes them too orange. Also pictures with dark backgrounds show up its inadequacies. I can’t seem to getit to reproduce the range of tones right. The background usually just goes black and all the deep colour disappears. It’s probably my ineptitude with a camera to be honest, but I had to photoshop this one a bit to get the colours a bit closer. They’re still off, by quite a way, but that’s as close as I can get them right now without taking a degree in photography.