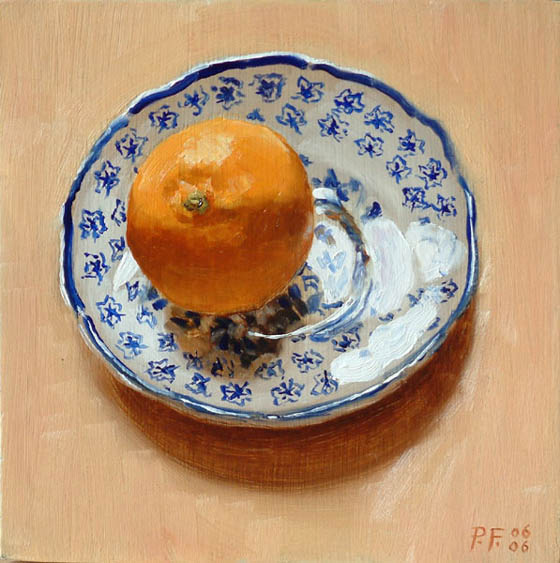 Number eight of the ten pairs of objects, this one was a major departure from my usual approach.

For all the paintings I’ve done recently, the set up has been pretty much the same.Working sight-size, I usually have the easel set up next to the still life, side on to thewindow and usually next to it, to get the strongest light. Trial and error hasshown me that this is the most reliable set up for painting, giving me a similarlight falling on my canvas or panel as is falling on the still life, allowing me to matchthe colours I see more closely.

Early on, I did one painting, thelemon, where I set upfacing the window with the still life in front of me. Although the effect of the back lightingon the lemon was very nice, that painting turned out to be adismal failure. The main reason for that was my dependency on mycolour checker,a piece of card painted flat grey with a few small holes punched in it. By looking through theholes at the colour I’m trying to match, and by placing small dabs of the colour I’m mixingnext to the hole, I’ve found it much easier to match the colours I see, or at least to getas close as I can. My aim throughout has been to match the colours I see as closely as Ipossibly can, since I believe that’s the best way to catch a convincing feelingof light in my paintings. That’s what I want more than anything else. To me, it’s allabout the light.

That’s one of the disadvantages of teaching yourself, everything has to be learned through trialand error, which is necessarily slower than having an experienced teacher tell you how itis and why it’s that way. Because it’s like that, and that’s the way it is. On the plus side,lessons learned the hard way, through experience, are imprinted onto your brain considerablymore strongly than lessonslearned by rote.

A quick glance at this painting will show you that I’ve painted it facing the window, theshadows cast by the clementine and saucer are towards you, and the nearest plane of the clementineis in shadow. So of course there was a real danger that the same thing that happened with the Lemonand Plum paintings would happen again.

But back lighting looks very nice. When I was setting this still life up, the nicest angleto view it from was facing the window, so if I wanted to catch the light from that angle, Iwas going to have to depart from my usual method by a considerable amount. 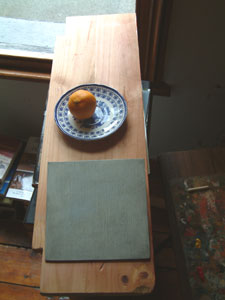 Unfortunately I couldn’t get quite the same angle in this shot as I was looking at thesaucer and clementine from, but this is somewhere near. Also, taking this shot facing the lightappears to have confused the camera somewhat, the actual colours and tones were much closerto what you see in the painting. At least this shows how things were set up.

I’ve placed the panel I’m going to paint on right on the wooden plank which the still lifesits on. Although it’s angled slightly towards me, there’s still enough light falling on itto see what I’m painting. Two obvious disadvantages are that I can’t use the colour checker,(for the reasons described above,) and also I can’t really stand back from the paintingas I usually do, in order to produce a reasonably accurate sight-size drawing out of thesubject. To confuse matters further, the picture plane is at a different angle frommy panel, which is much more towards the horizontal.

I was dubious about whether this painting was going to work out at all. But I also have agrowing feeling that I don’t want to become over dependent on my tools, my little helpers,like the framer and the colour checker. These two tools have been a great help in allowingme to paint what I see up to this point, but they are just tools. The danger with any toolis that if you become dependent on it to get the job done, you’ll be scuppered if youdon’t have it with you. In the case of painting, evolving the ‘ideal setup’ has been a great help,but necessarily limits the angles from which I can paint an object. I’ve dropped the frameralready, since I’ve found on one painting recently when I couldn’t use it, (because it was too smallto frame the subject,) I could get along fine without it. Facing the window today meant I was goingto have to get along without the colour checker too, and working sight size was going to be a challengeat best.

But since the paintings have been going quite well lately, and I’ve been doing one a day for thelast few days, I decided I could afford to lose this one of it didn’t work out, and at the veryleast I might learn something new, which, after all, is the point of the exercise.

First, the drawing out. The write up of thelemon and bottle includesa fair description of how I usually work at this stage, sighting across from the subject to the paneland marking out where things are going to go. With a bit of practice, that’s quite easy when youreasel is basically the same as your picture plane, but in this case it wasn’t. To get round theproblem, I had to create an imaginary picture plane and work from that. To do that I held a brushwith one end against the bottom of the panel, and the other so that the angle of the brush handlematched the picture plane. That was going to be very hard to replicate exactly over multiple measurements,so I limited myself to just four measured points, corresponding to the top, the bottom, and thetwo sides of the saucer. That was enough, everything after that stage was drawn in relative to thesefour points by eye. Thankfully I got away with it, first hurdle over.

Next I laid in the shadows as I have throughout this series, scumbling in a mixture of burnt siennaand ultramarine with a high percentage of medium. Being as I haven’t got round to making any ofmy own yet, and as I’ve decided I’m not partial to Roberson’s own medium, I went back to the Roberson’smaroger, or tube cheese as I’ve taken to calling it. I like this medium very much, it stays workablefor the entire time I’m painting, four to six hours usually.

So far so good, now onto the opaque colour for the areas in full light, but with no colour checkerthis time. This stage also went ok. I’m taking that as a sign that my eye is getting slowly betterat judging colour now. It was harder than usual, without a doubt, and I had to make a lot of correctionsto the colour and tone as I went along, but I’m happy with the end result as far as the colour goes.The clementine is a mixture of cadmium yellow, cadmium red, flake white, and sometimes a littleburnt sienna. Since introducing burnt sienna to my palette for use in the laying out of theglazes for the shadows, I’m finding it to be a very useful colour for all sorts of other things too.If it’s there on the palette I might as well use it.

So, this painting represented a risk, yes, but in this case I think it’s one that paid off.Hopefully the painting speaks for itself. I’m happier with this painting than with any of theothers so far, not just because I managed to avoid being tripped up by things that have spoiledpaintings in the past, but also because I think I caught the effect of the light fairly well.My yardstick for how well I’ve done that is always how real the objects appear in the final painting.Painting, for me, is about seeing the light reflecting off the objects, and trying to catch it inmy painting, and today I did at least as good a job of that as I’ve done before, despitethe possible pitfalls. And I really like the effect of the backlighting. It’s unchained me from the easeland opened up a new way for me to approach these little paintings, which I can experiment withmore as I go through into thenext series of ten paintings, whatever that will be.

I don’t want to give the impression that I’m gettingcomplacent,complacency is the enemy of progress and I still have a very long way to go. I haven’t even startedpainting portraits yet. But as I work through my multiple series of little still lifepaintings, I can see that, as far as I’m concerned, concentrating on light and colour and practicingregularly is starting to pay off.

There’s two more to do before this series is finished, but Ialready know what I’m going to be painting for those. No hints though, you’ll just have to comeand visit again when they’re done. I can tell you what they’ll be about: catching as convincinga feeling as I can of the light falling on the objects I’m painting.