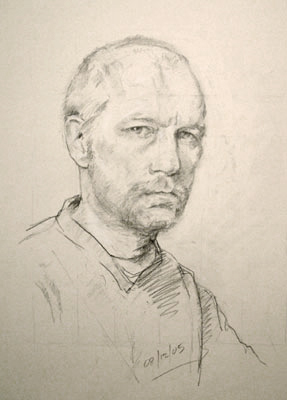 Fourth in the series – a self portrait a day until Christmas.

Another day another self portrait.

This one was done much earlier in the day, in fact I just finished it a couple of hours ago.All The others were donearound two in the morning when I guess I was pretty tired. It also means I got to do one by naturallight today. I don’t know what it is about natural light, it just seems to make everything easier to see.

I used the big grid again for this one, again you can see the grid marks on the paper. I find I’m using itless with each drawing though, which I think is a good thing, and here’s why: When you grid up a 2d image for copying, youcan pretty much guarantee that neither the grid nor the image are going to move. You can go have a cuppaand it will still be the same when you get back. Not so drawing from life. Particularly with self portraits.

The way I use the grid for these drawings is to tape it to the mirror, so the grid is effectively half waybetween me and my subject, my reflection. Putting the grid anywhere else means dealing with a reflection ofthe grid in the mirror – two grids. Add to that the separate images produced by each eye and you have fourgrids, most confusing. Take it from me, taped to the mirror is best.

However, that means that if I move, so does my subject, soany change in point of view is effectively doubled. Now these drawings are currently taking me anythingfrom one and a half to three hours to complete, so I’ve no chance of staying motionless right through thedrawing. I think the net effect of this is to introduce lots of small distortions into the drawing if thegrid is followed too slavishly – or if there is a long period of time between one measurement and thenext. It would produce drawings where certain elements were very well observed, but the whole was somehow wrong.I’d say that pretty much sums up the last three drawings.

My solution to this today was only to use the grid in the first fifteen minutes or so, just to block insome anchor points: nostril, ear, chin, top of head, eye-line, mouth. Once I had this I didn’t referto the grid again until later in the picture when I roughed in the shoulders and chest, which I hadto change later anyway.

Once I had those points in, I was tending to take measurements and judge distances by eye, both eyes open,relating the element I was drawing (bottom of nose, eyebrow, top of ear) to the next nearest elements.

I do feel that I produced a much more accurate drawing through doing that, with less cartoon distortion.There was something else today though. I was seeing better. I wasn’t consciously trying to see flat shapesas a whole across the picture plane. I was drawing my face feature by feature. This goes somewhat againstwhat I’ve been trying to do lately with the right brain drawing exercises, but it felt more comfortable today.

This is the key I think. WhetherDrawing on the Right Side of the Brainis right or not about right brain perception, there is one point the book makes which I have no doubt is true:When we draw, we generally don’t draw what we see, we draw our inner symbol for what we see.

The reason that most adults draw like children is that they haven’t drawn since they were children. Whenwe are young, learning to draw, we evolve a simplified symbol system for our drawings – circle with rays forthe sun, triangle for nose, stick arms and fingers. When we come to draw, we have a strong tendency toreproduce these symbols,rather than what we really see. In fact, we don’t really see at all, not in any real sense. We look. Our braincategorises what we’re looking at and tells us what it is. We draw our symbol for eye, chair, table -not what we would see if we bothered to look properly.

This is the crux of the problem, it’s the same withpainting, which is why I’m so happy that I called this site Learning to See – because that’s exactly whatI need to do to produce good representational drawings and paintings. The skill I’m slowly regaining is notlimited to techniques with the materials, or measuring, or even mainly those things, I’m slowly regainingmy ability to look at something and to see it.

Today, for whatever reason, I was seeing better. I certainly think that contributed to this being a betterdrawing than the three others so far, not just laying off with the grid and getting things in the rightplace. I think this is the best likeness I’ve got so far.

It made me wonder about how little I could get away with drawing and still have it live as a portrait. Itstruck me as a good idea to use this ‘self portrait a day’ project to try and reduce down the drawingto the bits that count. Just what’s required to make a face recognisable and describe (or infer)the form. So I’ll try and repeat the same method of making the drawing for the next one, and see if it makesthe drawing easier (as it did today) and better.

The truth is I know a lot of it is down to how I feel on the day, just whether I’m drawing well that dayor not. It would be nice to think that by evolving and applying a method I can get some consistency intothe work though. On days when I’m really not firing, and I produce crap, I look at how far I’ve got to goand it seems unreachable. Today it doesn’t seem quite so far away, maybe I can walk it if I keep going.I need to remember that each piece of work is just a preparation for the next one.

This drawing is one of those odd ones where you see one thing when you’ve just finished it, andsomething completely different when you come back to look at it later. I did think it was pretty goodwhen I’d done it, but I can’t see why now. I like the left eye (as you look at the drawing) but that’sabout it. Three out of ten, see me.