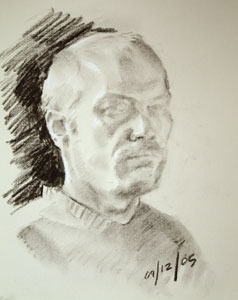 Fifth in the series – a self portrait a day until Christmas.

A quarter of the way through the project now.

This one’s a little different to the last four. Firstly, I discarded the grid completely. Secondly, I drew it with a charcoalstick, a medium I’ve always liked. I was concentrating on seeing blocks of tone, not worrying initiallywhether I was getting a likeness or not, just thinking tones and shapes.

I did very little direct measurement. I started with the block of tone for the right eye (on the left in thedrawing) and from there went down the nose to the mouth and down to the chin. I left the outside line of thetop of the forehead till later, and worked down into the neck, up the sweater neck line and up to the ear, crossreferencing by eye with the base of the nose. 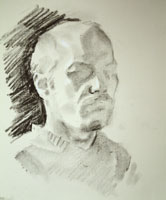 Here’s the drawing about half way through – in terms of time, which means nothing, right?.There wasn’t too much added from here really.

Its interesting that despite not using the grid, or really measuring in an exact way, I seem to have goteverything pretty much in the right place. Also, since I didn’t have any problem seeing blocks of tone insteadof detail to start with, I’ll lay off using the grid now. Although I only used it for four or five drawings,it did help me improve my proportions. I may still use it now and again, giving it some more difficult challengeslike foreshortening. I do think it’s only any use for roughing out or quick sketches though.

I pretty much followed my nose with this one, after a while I stopped making good marks and started taking thepicture in a different direction than I’d started out. I wasn’t really seeing in the same way, I wasstarting to look at details too much. I left it how it is, pretty much unfinished I guess in a ‘portrait’ sense.I feel i moved on though, and will try some more of these. I’ll start adding more detail when it feels right to.

Looking at it now, I can see that the right eye (left on the drawing) is too low and too far away from the nose.I was working on that eye when I decided to stop, and that’s probably why. Was this a right brain drawing? Did Islip out of R-mode at the end and place the eye wrong? I know I was no longer thinking in terms of relating tonalshapes by then, so maybe. At least I appear to have learned to stop when I’m spoiling the picture.