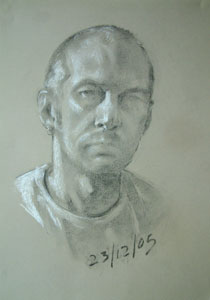 Fourteenth in the series – a self portrait a day until Christmas.

Back to charcoal for this one, which is feeling more and more like home turf. The mid toned papermeans more work in the highlights, I used a white pastel this time instead of conte. It’s a bitsofter and more forgiving, not as loose as charcoal but you can still push it about a bit.

No measuring in this one at all, I got the proportions by relating shapes to each other by eye as I went along.First I put in construction lines for the nose and eye line to make sure I got them at right angles, then I startedfrom the base of the nose and worked out from there by placing blocks of shadow to define shapes.

As soon as I’d got as far out as the edges of the head in places, I put in the main shadow dividing the faceand neck vertically. Things moved around a lot at the start of this one, lots of corrections and adjustments soI started off light, placing blocks of tone and no lines at all except to define the left edge of the neckand the shoulders. It kept everything pretty fluid.

I tried to sit less still in this one, for two reasons: Firstly because I need to get used to moving sitters,and secondly because I think measuring is only of limited use in a portrait. For me anyway, I seem to getas much distortion as I do correct placing from measuring. It’s been useful to relate it to the ‘ideal’proportions of the head,and to correct a few major things I was repeatedly getting wrong, like the placing of the eyeline, but Idon’t think it’s helping me any more. If I can get reasonable proportions (like these seem to be) by not measuringand just adjusting till it looks right, then I think I’d prefer to do it that way. It results in looser,less constricted drawing, which I like.

Being less strict on keeping the pose exact has produced a more natural drawing(thanks for getting me thinking about that Jim), which is a nice side benefit. It’s also a better portrait I think,with a feeling of me even though it isn’t finished.

Why isn’t it finished? Basically because I reached a point when my concentration was going and I wasgetting things wrong. That’s not so bad at the start, but I was at the point of working into the tonesaround the features to define them more, and I was getting things in the wrong place anddestroying the drawing. Because of the looser way I was working with this one, I could have come back to it todayand worked some more, but this project is a portrait a day so an unfinished drawing stays unfinished.

I couldn’t say for sure how long I worked on this one, but I guess about two to three hours.It’s a pretty hesitant drawing. Nothing is stated very definitely, and some sections are still wrong, likethe right hand line of the jaw and the right side of the nose, but overall I think it works.

When I sat down to draw his one, I spent some time just looking at what I had to draw before I started. Iusually do this now. I also did a quick version of one of Betty Edward’s right brain drawing excersises, the oneshe calls contour drawing – you follow the creases on your left hand (if you’re right handed) with your eyeand as your eye moves you match the movement with the pencil in your other hand on the paper. I missed out thedrawing bit and just followed a crease for five minutes or so. Whether this had any bearing on how the drawingcame out I really couldn’t say, but it did help to quiet my inner chatter before I started.

The main thing I noticed, looking in the mirror before I started and trying to judge the tones, was thenice line formed by the main vertical shadow bisecting the head. The shapes cut out of it by the right eye,nose, chin and adam’s apple made a nice staggered edge running down the middle of the face, andthat’s come out pretty much as I saw it.

There are some things I’m happy with in this drawing. I seem to have got the balance between the tonessomewhere near, I think that’s the most realistic rendering of form I’ve got yet. Mainly that’s down to a strongfeeling of the light I think. The same thing works in thesmall still lifes, if I can get a good feeling of thelight then the subject seems that much more alive.

It’s ashame the drawing isn’t finished, but better that than screw it up it up entirely. Only one more to go now,which I’m about to do before the sausage rolls and mince pies start.