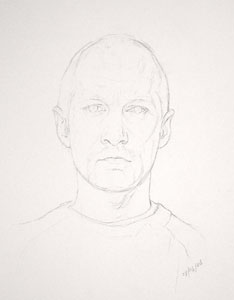 This one came out very light. It was drawn in natural light over about six hours, with a lot of readjusting andcorrecting.

With this drawing, I was trying to change the weight of the line with the depth of tone of the contoursI was following in themirror. I was trying a bit harder to get a feeling of the light in the drawing, just with line. Since the leftside of my face was in shadow (right side as you look at the picture,) I let the line get darker there. Where thecontour was very indistinct, I left it that way in the drawing too, like over the top of my head. I think thereis some feeling of light fallingfrom the left of the picture. Although I haven’t used any tone, I have outlined the main dark tone block onthe right of the face. Even though it’s not filled in, it kind of reads as shadow. I think that must be aconditioned response.

This is a better likeness than I’ve got for a while I think. It’s still not there, but I think at least theshape of the head is quite close, and that is my nose. And Mr. Angry has left the building.More of these drawings show me lookingrelaxed now, where I used to look wound up in them before, struggling with drawings that were running awayfrom me all the time.

I think this is the first one where I can see the benefit of working just in line. After they went verystrange initially, the drawings are starting to calm down now. I’m concentrating on shapes as much as I can. SlowlyI’m getting better at replicating them on the drawings – very slowly though.