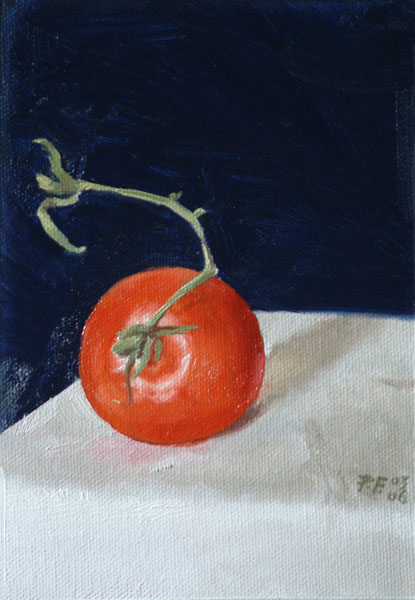 Number four in the ten single objects series, and the second one to use the new set up with both the still life and the canvas facing the light. The set up for this painting was exactly the same as for the apple.

The gods of light were especially kind to me when I painted this. It was a slightly overcast day, no danger of the sun coming out, so the light stayed pretty constant throughout the day. This painting took me five or six hours, and the light did start to go towards the end. It was touch and go whether I was going to get it finished, but the light brightened a bit at the end of the day and gave me another half hour of work, just enough to get it finished.

This one came out pretty well I think. Just like the apple, I spent the majority of the time mixing and matching colours, not putting anything down on the canvas until I was sure it was right, or at least as close as I could get it.

I did struggle a bit with the colours on the tomato. It was a challenge to get them right just with alizarin and cadmium yellow light, I couldn’t seem to get the intensity of the red quite strong enough. The reds I was mixing had a more orange cast to them (which the camera has over-emphasised a bit in this shot) and I was continually adding more red, which made it too dark, and then adding more yellow, which made it light enough but too orange. I tinkered around with the red like this for along time before I decided just to put it down as close as I could. I will admit, I was very tempted to get some cadmium red out, that probably would have solved the problem. But I do think that there was a lot of value in the time I spent trying to get this red. I’m familiarising myself with my palette (and with mixing paint) much more by working like this.

With the still life set up away from the window against the back wall like this, the light is very diffuse, not as interesting to paint as when I getting the stronger diagonal shadows before. But I have captured the light much better than usual in this one. Using a darker background than in the apple painting has made the tomato stand out more. I can feel the light falling on the tomato much more than usual, it makes it live more.

I think I could have got the feeling of the light stronger if I’d had time to rework the reds on the tomato. There was more variation than I’ve got here, so that’s something to think about for future paintings.

Since this one and the apple both came out ok, I think that the method I’m using is working out ok now, I just need to practice with it to get better. I think for the rest of this single objects series I’ll keep everything pretty much the same, apart from maybe playing with the position of the still life in relation to the window a bit to get some more interesting lighting. As long as I keep the light on my canvas I should be ok.

I do seem to be gaining some momentum now. The blank canvas at the start holds no terrors for me any more. Evolving a method and breaking the painting down into stages gives me a way in and lets me start more easily. I’m enjoying the painting much more. I can keep my concentration up for longer periods of time now, I seem to spend the whole day when I’m painting in a kind of daze of concentration. It’s almost a physical change when I finish and come out of it at the other side. Slowly my awareness of the room around me comes back, then of the world outside, it’s strange.

Both this painting and the apple left me feeling exhilarated when they were finished, which lasted about half an hour or so before I came down, like a drug wearing off, followed by complete exhaustion. Who would have thought a little piece of fruit could take it out of me so much.

I’ve also been getting more interested in still life painting for it’s own sake. My overall goal is to paint portraits, these still life studies are intended to teach me how to use the paint to create a believable feeling of the light, to catch something of reality in the painting if I can. But I’m realising more and more that I could happily spend the rest of my life on these little still lifes and never run out of things to paint, or to learn.

I’ve been looking around more at the seventeenth century Dutch still life painters. That period was the birth of still life painting as a separate genre in itself. It was around a hundred years after the reformation, the great split in the Church. The spirit of the time in the northern Europe then was a movement away from the superstition of Catholicism and an increasing concern with the outward appearance of things, with empirical knowledge and reason. I’m conscious of how little I know about this, and mean to learn more. Understanding the societies which gave rise to different forms of painting helps to understand the paintings and the painters who did them. In order to know where you’re going you need to know where you’ve come from.

The further I get through this project to learn how to paint, the more I uncover layers of meaning in the smallest things, making me increasingly conscious of how small I am in the big picture and of how much I’ve got to learn. As well as teaching myself my craft, I’m learning more than I ever knew before about the tradition I come from. I’m having my own mini Renaissance in my back room.

I don’t think it’s overstating things to say that getting back to painting has put the meaning back into my life. After years of a soul-less existence of office drudgery, I’m slowly coming back to life and waking up again to the sheer beauty of the world around me. To get completely lost in looking at the shapes made by the branches of a tree out of a train window, or by the way the light reflects off a piece of fruit seems to me to be a fantastic, life enriching gift. Laugh if you will, I’m happy.

I’m full of anticipation for what’s going to come next in these little paintings. I don’t know what it’s going to be, but that’s the best thing about it. For the time being I’m going to continue with things as they are, applying my method and learning more from each painting. After this series is over I’m going to do a series of ten pairs of objects, I don’t want to look any further forward than that right now. It’s good to have a consistent approach, but I need to stay flexible enough to change it when I need to.