This drawing is finished now, after another 5 hours on top of the original 10, so I spent a total of around 15 hours on it.

Actually I’m not sure you could ever say a drawing like this is really finished, unless it’s an absolutely exact copy, which seems to me to be an impossibility. Regardless, I’m calling it finished even though I could go on correcting, mainly because the paper is getting overworked now.

Here’s the original, on the left, with my copy on the right: 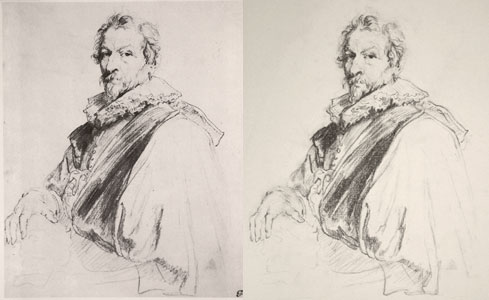 Some parts are still out. His head and face are not that close, the angle of the top of his collar is wrong and his hand, after re-drawing a fourth time, is still wrong too. After 15 hours to have only got this close is disappointing in a way, but overall I’m pleased. Not because it’s a good copy, it’s not, but because I learned a lot from doing it. That, after all, was the point of the exercise.

I had to concentrate considerably more than I normally would, and I had to look a lot more carefully. After repeatedly correcting and re-correcting the same parts of the drawing, I started to look much more closely. I also had to force myself to watch my own marks more closely. It made me realise that sometimes I let my hand draw when I’m looking at the subject, not at what I’m doing, so I’m consciously trying to stop that bad habit now.

What this drawing represents to me is an exercise in seeing, and in that sense is really no different than every other drawing I’ve done lately. Except it was harder than anything else I’ve done lately, which meant I had to see better in order to do it. This being such an obviously good thing, I’ll be starting another one soon. 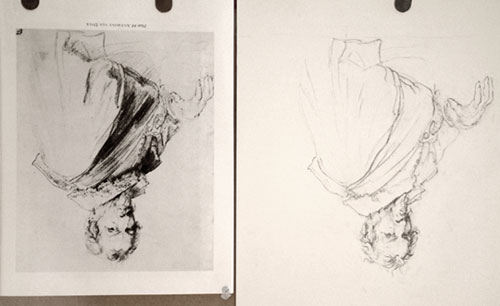 Copying old master drawings is a pretty traditional exercise to be doing. I believe this kind of thing would be standard fare in an atelier. The original drawing came from a plate in a Dover Art Library book of old master portrait drawings, I’d like to do a few more of the plates like this.

I’m copying it upside down to help me concentrate on seeing the drawing as shapes, not as particular features, and copying the shapes as closely as I can.

Ideally, a drawing like this should be corrected over and over again until it’s absolutely right. This drawing has already shown me what a tough exercise that is. I’ve corrected everything on the drawing several times now, I’d like to be able to redraw his right eye but I’ve redrawn it so many times there’s a dark smudge there now. His hand I’ve done three times and it’s still not quite right, the fingers are a bit too long.

So far I’ve spent about ten hours with this drawing. I say ‘with this drawing’ because much of that time has been spent looking from one to the other, trying to see mistakes. I’ve no idea at this stage how much longer I’m going to have to spend on it, but I can see a lot of parts that need changing now. The top line of the collar(or bottom this way up) is shouting at me. I’ve just noticed now that his head is too big, so I’m going to have to do it again.

So what am I learning?

The first thing I’ve got from this is a deep respect for the original artist, Van Dyck, and for his drawing. His lines are infinitely varied, continually changing in weight and he uses a lot of gesture. His favourite line appears to be the ‘S’ shaped ‘line of beauty,’ I’ve noticed Raphael builds a lot of his forms with this line.

I’m also learning concentration. Learning to see is not about training your eye, it’s about training your brain. You need to train your brain not to discard visual information as unimportant, but to record everything. Once you’ve seen something properly and your brain has processed all the visual information, you have a much better chance of transferring it accurately to the paper. I’ve been amazed at how far out I’ve got some of this drawing as I’ve gone along.

One of the things that drew me to this drawing is the way Van Dyck has simplified the tones. He hasn’t gone in and tried to capture every nuance of tone, there’s not even any highlights. But the light lives in the drawing. Large parts of the face are just left blank, with a few very light construction lines to suggest the form, but the light on the face in the original drawing is totally convincing.

The day after I worked on this drawing I went on another sketching trip to the Cafe Nero. I’m pretty sure I could see the benefit of this practice in the drawings I did on that trip. It’s intensive work but it really is the hard stuff that stretches you.

Here’s the drawing the right way up, I just flipped the image in photoshop. 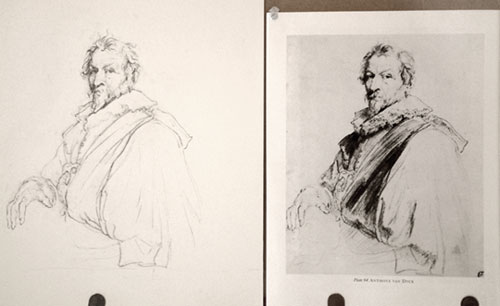