“The south-west is the region of retreat, the north-east that of advance. Here an individual is confronted by obstacles that cannot be overcome directly. In such a situation it is wise to pause in view of the danger and retreat. However, this is merely a preparation for overcoming the obstructions. One must join forces with friends of like mind and put himself under the leadership of a man equal to the situation: then one will succeed in removing the obstacles. This requires the will to persevere just when one apparently must do something that leads away from his goal. This unswerving inner purpose brings good fortune in the end. An obstruction that lasts only for a time is useful for self-development. This is the value of adversity.”

I’ve got VERY behind with updates to the site over the last week, and I’ve been busy with the pencil so there’s a bunch of drawings to put up today: Tencafe sketches, four eyes, six mouths, seven noses and an old master copy (in progress).

It’s a long time since I’ve done any painting now. When I started the site I thought I would be mainly painting, perhaps do the odd drawing now and again, and somehow magically become a portrait painter again after a year or so of that. I’ve now realised that I have to learn to draw first, so that’s what I’ve been concentrating on. Once I improve my drawing I can start painting regularly again, but not until.

These are coming on apace. I’ve done I think five cafe trips now, and about 26 drawings. Each time I go I seem to get a bit better. I think the main thing I’m learning from these drawings is how to simplify. It’s also a nice release from the more academic exercises.

This drawing is from my last trip on the 25th November and is one of my favourites so far, mainly for it’s simplicity. But it also captures something about the subject. Its not a portrait, but it is a likeness. I’m sure that trying to catch something about a person in a few lines will help me when I come to try to catch the likeness of a sitter in a more finished,painted portrait. I’ve had to accept that, eager as I am to start painting portraits, it’s too early for that yet. I have a lot of practice to do first.

Features of the Face

I’ve been getting on with the series of eyes, noses and mouths, with mixed results. I recently got hold of a couple of casts made of reconstituted marble off ebay. Primarily I got them to practice sight-size cast drawings, an atelier practice method of which more later. But I’ve also been using one of them, the female goddess, for my features series.

I’m not entirely sure what I’m getting out of these drawings, but I guess all practice is good. For at least one drawing in each series I’m going to do an anatomical study, learn what’s happening underneath the surface. Although this may seem contradictory to the ‘right brain’ seeing-shapes-not-things approach, I don’t want to miss anything out of my education this time round. 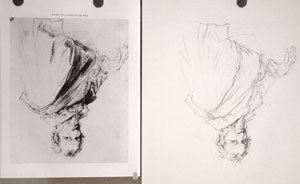 I’m currently working on a copy (upside down of course,) of a Van Dyck drawing. I’m drawing the copy sight-size (i.e. the same size as the original which it is fixed next to,) taking my time and correcting and correcting until I’ve got it as close as I can.

This is probably the most demanding exercise I’m doing at the moment, so I’m goingto do a series of these. Invaluable training.

Overall things are going pretty well. I’ve had to stop painting and concentrating on drawing, which may seem like a step back, but is actually a step forward, since it will help me to resolve problems I’ve been having with the paintings. “Unswerving inner purpose brings good fortune in the end.” I still hope to do the odd small still life painting, but drawing is the priority for now.

I’ve seen an improvement in my drawing over the last month. It’s slow coming, but it is coming, and it will take as long as it takes. I’ve just ordered a copy of the republished Bargue Drawing Course, a series of plates which werestandard study in academic ateliers of the nineteenth century. As far as I’m aware, the normal progression of an atelier education would be first, copy the master’s drawings. Second, draw from the cast. Third, draw from life.Fourth, if you made it that far, paint from life. That’s roughly the order I intend to do things in, but I’m not giving up my cafe sketches, they’re far too much fun, and I believe give me something extra to the academic exercises.

I’ve done pretty well in terms of output for February, but I’m run down, have a cold, and haven’t been giving business enough attention. I worry sometimes that I’ll get too obsessed with this and normal life will suffer. But when I look at the last batch of sketches from the cafe yesterday, I can see an improvement and that makes me feel good. I will get there eventually, I just hope I don’t screw everything else up along the way.