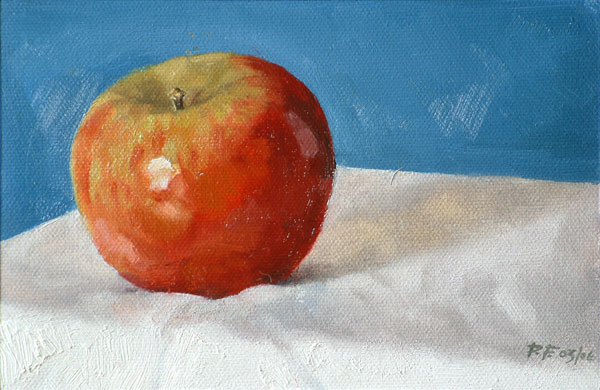 There was a lot riding on this painting for me.

After I’d realised with the plum painting that having the canvas in shadow was making it hard to match colours, I was planning to make a point of having the same light on my easel as on the still life subject this time.

If I was right about what went wrong with the plum, this painting should turn out better, if I was wrong and it made no difference it would be back to the drawing board, literally.

So for this painting I rearranged the room and put my still life subject platform (a rather grand word for some filing boxes stacked up) opposite the window against the back wall. I’m already working right next to the still life, so the easel went just to the right of the apple on it’s platform: 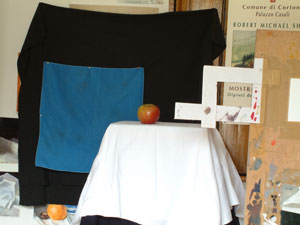 This gives a pretty good idea of how I set this one up. The easel is a little in front of and to the right of the still life set up, with the canvas facing the window. This gives me the same light on both. It also means that when I get the colour checker out and start putting dabs on it to match the colours, I’ll have the same light on my dabs of paint, making it (hopefully) much easier to get them right.

This set up made a huge difference. I started this painting earlier than usual, because the sun is getting round into the room again in late afternoon, now that spring is here. That will become more of a problem I know as we get into summer, and will force me to paint earlier and earlier to keep the light consistent for as long as possible.

Right from the start this painting felt different. I knew the light wasn’t going to change for quite a while, and that made me much more relaxed, no need to rush.

As usual I started with the background. Now I know that the background colour is a bit mad. It’s a complimentary to the apple (which is mostly orange – more on that shortly) and is also about the same tone, which sets up a strong colour contrast. To be honest I’d have preferred it if it was a shade or three darker, but I kind of liked it and wanted to get started so I pinned it up.

I spent a lot of time mixing that first colour. It was at least twenty minutes before I put the brush on the canvas. The colour checker really comes into it’s own though when the light is set up right, I kept on making small changes until I had the colour as close as I could get it. It’s mixed from flake white and ultramarine, knocked back with some alizarin and then softened with cadmium yellow light. I’m still sticking to my five colour palette. Once the background colour was in I already had the feeling that something was different, this one was going to go better than the plum.

Next I moved onto the cloth. I put it in initially in large sections of tone, again taking a long time with the colour checker trying to get the tones and the colours right. Shadows are full of colour. The shadows on this cloth ranged from a soft violet grey on the flat surface, to darker yellow grey in the shadow of the apple. 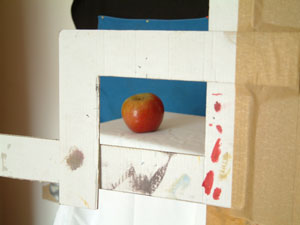 This is quite close to what I saw through the viewfinder when I was painting, again allowing for the inaccuracies of the camera. You can see where I’ve taken to putting dabs of the colour I’m working on on the surface of the viewfinder to check it against the colours of the still life.

I noticed as soon as I started to paint the cloth that it was a lot easier to get the colours and tones right on this one. I actually spent longer on them than I usually would, but I think that’s because I can see finer differences in tone and colour when the light is set up right. 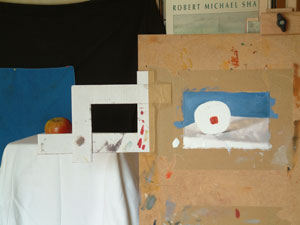 Here’s the painting a bit of the way through. I remember taking this picture because I’d just spent about fifteen minutes mixing up the colour for the mid tone of the apple, the plane facing me.

When I put it on the canvas I couldn’t believe it was so dark, and I also couldn’t believe it was orange, but it was. That apple is green and red, and those are the colours I was expecting to use, but most of the apple is painted orange (with a greenish tint,) and the green and red are just in little flecks over the top here and there. The colour checker told me it was mostly orange – and it was.

This painting took a little over five hours to complete, much longer than usual. The vast majority of that time was spent mixing colours and checking them against the apple set up until I thought I had them right. I have to say, this is the best I’ve got my colours yet in terms of how close they are to what I see. I expect my eye (or I should say my brain) to get more attuned to seeing colours as I go on, but for me this is closer than I usually get.

All along I’ve been saying that if I can get the colours right, the subject should start to live on the canvas, I should be able to feel the light. All right, so the mad complimentary background colour makes the apple live less, it destroys the three dimensional space a bit and flattens the canvas, but all the same I think that the apple is better than my other paintings. It’s starting to come to life a bit, and to live on the canvas as what it is, an apple. Just starting though, not there yet.

What this painting does mean is that I was right about the light, and the effect it has on my efforts to match the colours. It means that my method works when I apply it the right way, so I should be able to settle on this approach for a little while, at least until I’ve finished the ten single objects series.

This is number three in the series. All these paintings are intended as studies to teach me to see colour more accurately, before I move on to more complicated subjects and start thinking about difficult things like composition and brushwork.

Limiting my palette and my subjects is helping me to deal with things one at a time, and figuring out how to set things up for the best light is part of the learning curve. It’ll be interesting to see if the modicum of success I’ve had with this apple is borne out by the next paintings when I use this set up again, or whether this one was just a fluke.