It’s been four months since I did any Bargue drawing. That’s a bit frustrating, since I remainconvinced that the Bargue drawings are the most intensive eye training I do. Right from the first plate,I’ve seen the positive effect of them in my other drawings. In fact, I’d go so far as to say that the Barguedrawings have changed the way I approach drawing as whole. Whatever I’m drawing these days, (with theexception perhaps of the cafe sketches,) I approach it like a Bargue drawing, finding the top, bottom,furthest left and furthest right points, then refining from there.

Generally speaking, I’m a lot lessexacting in other drawings, but that’s why it’s so important to subject myself to the hardcore eye trainingof the Bargue copies. Regardless of the level of accuracy I’m going for in a drawing, I break the process downinto the same steps as the Bargue plates. I don’t think that it’s an exaggeration to say that Charles Bargueis teaching me to draw.

The big problem I was having before, the one that stopped me doing them, was the bad quality of thereproductions I was using. They were just straight laser copies, and by the time I got toplate three, when tone was introduced forthe first time, it had become obvious to me that the copies were not reproducing the nuances of tone inthe originals. I knew that was going to be a problem when I got onto the more complex plates. I don’t want tocopy the drawings the size they are in the book, which is about a quarter of the original size, because, again,I’ll be scuppered when I want to do the more complex plates. Your average stick of charcoal, no matter how sharp,will simply not be able to reproduce the level of detail at a quarter of the original size.

Well, I’m happy to report that now I’ve got it sorted. I took along the plate I wanted to another printer, havingremoved itfrom the book first. I have to say it hurt to break the spine on a book that cost me over £60, but it had to bedone.

Now, this plate was scanned in a similar way to the other printer, the difference was in the printing method.The printer that this print shop used was a ‘dye sublimation’ printer. I don’t really know what that meansin any detail, but the important thing is that the reproduction I got back was, to all intents and purposes,and exact copy of the original plate, just the actual size (about 60cm by 42cm if memory serves.)

Another thing that hurt was the price. This reproduction cost me £18. £18!. If I get four plates done, itwill cost me more than the book did, and there’ll still be another 56 plates to get copied! And that’s onlythe first section of three! Thankfully, the guy atthe print shop said that the main cost is the paper, and he’ll be getting some thinner stuff soon, which will giveme the same quality at half the price. I hope so.

Regardless, it was worth the cost. Plate four introduces half tones for the fist time, I want to be able to seeexactly how Bargue has laid down his marks. I’ll just have to bear the cost. 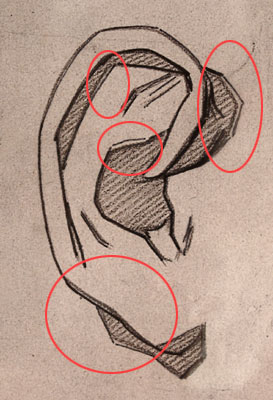 I decided to give myself a little sanity check on the first two drawings I’ve done from plate four, just to seehow well I was doing. This picture shows the original drawing, with a tracing of my copy on a clear acetate sheetlaid over the top. Just look at all those mistakes!

Thankfully, the second drawing from this plate went a littlebetter, so I don’t feel quite so bad about it. Although it might be slightly painful to have my multiple mistakespointed out to me in such an unforgiving manner, it’s a very good thing. These acetate sheets can take the placeof a drawing master with a more developed eye than mine, and show me exactly how much work I’ve got to do beforeI start to get really accurate copies. Quite a lot, apparently.

You can read about my experience with the beginning of plate fourhere. If you want.