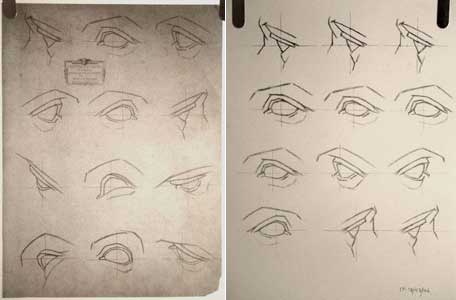 The original Bargue plate is on the left, my copies on the right.

I’ve had the original plate from the book blown up to A3, about twice the size they are in the book, at my local Prontoprint. Just four colour laser copies, but they seem to be good enough to work from. Trying to copy the drawings half size with charcoal would have been harder, because of the thickness of the lines. Originally, the plates were a shade larger than A3, 24 by 18 inches.

I had to do the first eye three times before I got it right, (actually it still isn’t but never mind, I seem to be getting better as I go along.) The second eye I had to do four times before I got it right. The next three went ok, then the sixth one I had to do twice because I quashed it width-ways a bit. I’m finding I have a strong tendency to draw things bigger than they actually are, something I’d never noticed until I started these copies and the Van Dyck copy.

The quality of the line appears to be getting gradually better as I worked through these copies. The first few are very dark and heavy, by the time I got to the last ones I was getting a quality of line closer to the originals. The drawings have been done with a stick of thin willow charcoal, sharpened with a knife at one end. Although I’ve always liked working with charcoal, it’s very easy to make a mess with it. I think I already have more control over it after even just these few copies.

The originals are deceptively simple, copying them is not as easy as it looks. Although it’s not difficult to get reasonably close, I’m trying to imagine some stuffy old atelier guy behind my right shoulder saying, “Not good enough Foxton, do that one again.” Despite that, I’m sure a real atelier would be more strict than I’m being on myself.

So far I’m only half way through this plate, it’s taken about five or six hours work to get to this point. At this rate it’s going to take a very long time to work through the book. 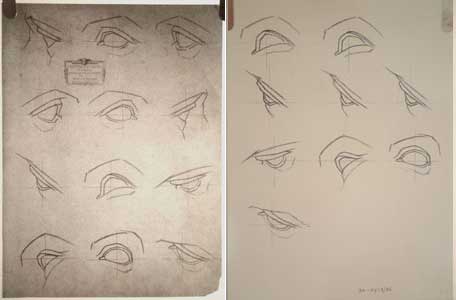 Here’s the second half of the plate. I think the accuracy is slightly better on this half than the first one. One of the things I’ve been concerned with when doing these drawings is how Bargue did the originals. Did he do those lines in one clean sweep, or did he build them up slowly? Regardless of how he did them, the only way I can get close with my copies to work very, very slowly, building up the lines gradually.

I admit that for some of these drawings I measured the more difficult lines on the original. I know that you’re not supposed to do that, the point of these drawings is to train your eye to judge the lines and shapes. But they took me long enough as it is, and as I moved onto the second plate I found I was needing to measure less. By the end of that plate I’d stopped measuring altogether, so my eye (brain) must be getting better at judging the contour of the lines and the shapes they create. 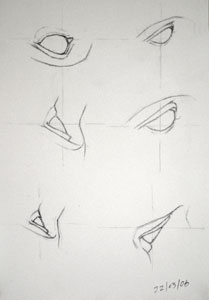 Just for fun, I did some drawings from my own marble cast of Clytie (I found out who she is now.) I tried to do them in the same style as Bargue did his, simplifying the shapes down to just a few lines. What I didn’t get right is the way Bargue reduces curves down to a series of straight-ish lines.

I’ll be doing some more of these, so hopefully the next batch will come out better.