Marking the highest and lowest points

In sight size technique, all measuring and judging is done well back from the easel. On this drawing, I’m working about six feet back. The position of each point on the drawing is decided on from this view point, visualised on the paper, and then added to the drawing by walking over to the easel (keeping the eye fixed on where the point is going to go) and marking it on the paper. 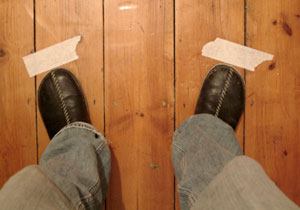 Before any drawing is done, pick a point where you’re going to be working from and mark it on the floor. Always return to this point to judge what you’ve just done, and to decide on the placing of the next point. I mark the position of my feet with tape.

Always measuring from exactly the same spot is crucial in cast drawing, since a varying viewpoint on a three dimensional object will produce distortions in the drawing. A far as I can see, it’s not exactly necessary when copying a two dimensional image, but I think it’s a good practice to get into since the method can then be directly transferred to a cast drawing or drawing from life.

To my mind, it makes sense to make sure that these first four points are as accurate as you possibly get them. They represent the foundation of the drawing, and any mistakes made at this point will mean serious difficulties later.

In this drawing, the highest point just happens to be on the central plumb line, so all I have to do is sight across from the plate to my vertical plumb line and mark the spot. But that won’t always be the case. If the point is off to one side of the plumb line, both the vertical height and the horizontal distance from the plumb line will need to be measured. 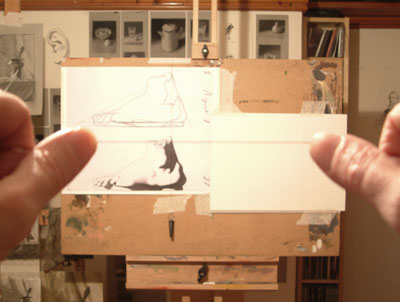 I use a length of black cotton for my measuring, much as you see people using a pencil for relative measuring. As far as I’m aware, this is pretty much standard practice, although you could use a straight edge like a ruler.

Here I’m matching the thread on the left to the top of the drawing on the plate, and sighting across to my drawing. Simple. Well it would be if my arms didn’t wobble about so much. I must say, I found this method of using a thread for measuring unbelievably difficult at first, but it gets easier with practice.

Once the thread looks level and lines up with the top of the drawing on the plate, you fix your eye (I forgot to say earlier that this is all done with one eye closed, always the same eye) on the point on the drawing, walk over, and mark it. I find that the first attempt is always out by at least a centimetre. It’s hard to keep your eye fixed on that one spot whilst you walk over to the easel. But once a mark is made somewhere near to where it needs to be, the next attempt can be judged in relation to the first one, and is always more accurate. So it’s back over to the spot again, sight across again, and have another go. I find it generally takes me three or four tries per point before I’m happy that I’ve got it.

For this drawing, I’ve already got the lowest point marked, since it corresponds to my horizontal at the bottom of the drawing. If you didn’t already have it marked, you would just do it in the same way as I marked the highest point.

The next step is to mark the furthest left and furthest right points on the drawing, which involves both vertical and horizontal measurements and is a little more complex.