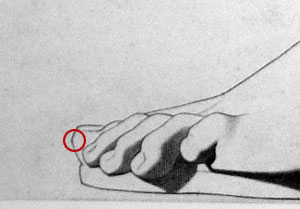 First, the furthest left point. In this drawing, it’s the point of the big toe, ringed on the image here.

In order to mark this point on my drawing, I need to take two measurements: The distance horizontally from the vertical plumb line, and the distance vertically from the horizontal line at the bottom of the drawing. Triangulating in this way should allow me to get pretty close.

I also have the advantage that there are two points already marked now, the highest and lowest, and I can also triangulate from these points, checking with my thread, to keep the margin for error as small as I can. 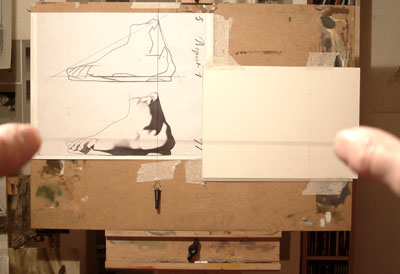 First, I need to get the vertical distance of the point from the bottom horizontal. This is done in the same way as finding the highest point, by sighting across with the thread. Since it’s only the distance from the horizontal I’m after, I mark this height on the vertical construction line on the drawing.

Again, this takes a few goes to get right, with the first attempt being no more than a ball park measurement. I find it’s a lot quicker just to accept that this first attempt is going to be out, and just use it as a guide for the next attempt. Repeatedly check and measure as many times as you need to until you’re as sure as you can be that it’s right. 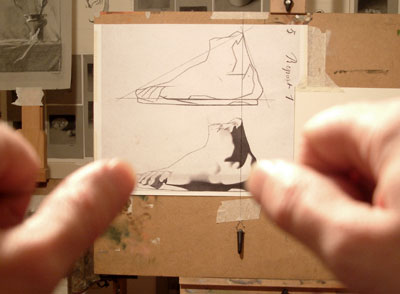 I find these distances quite a bit harder to get than verticals. The basic procedure is as follows: Wrap the thread once round the index finger of each hand, and draw it out fairly taught. Hold your arms out straight in front of you and lock your elbows. Holding your thumbnails against the thread as markers, you need to position your left thumb nail over the point you’re measuring to, and your right over the plumb line.

Now the hard part. Still holding your arms out straight, move your hands over the drawing so that your left thumb nail lines up with the vertical construction line on the drawing. Fix your eye on the point on the paper where your right thumb nail falls, drop your arms, and walk over to the drawing and mark the point. Sounds simple. It isn’t.

It always takes me many tries to get these measurements, even using my existing points to triangulate from. But it’s worth persevering with these initial points, because if they’re out by the smallest amount, they’ll be worse than useless to triangulate from to find further points. In my experience, it’s better to take as long as it takes to get these points right, or the drawing will just take longer.

For what it’s worth, it took me over an hour to get this one point down to my satisfaction, and I’m not ashamed to admit that I checked it a couple of times with the thread flat on the drawing, just to make sure I wasn’t too far out. However, all measuring and marking was done from the spot marked on the floor.

This brings up an important point I think, and that’s the mind set that you approach this practice with. If you’re looking for a couple of nice copies for your portfolio, or to show off to friends, then you may as well just trace the original. One of the main skills that the Bargue drawings and the sight size technique teach is the ability to measure relationships by eye. If you don’t strive for accuracy, if you cop out, you’re missing the point in my view. This is exercise for your eye, and the harder it is the more exercise you get.

It’s been proved to me many times that this works. When I used to go and sketch in my local cafe at weekends, I used to find that the drawings were better if I’d done some Bargue practice the night before. Without fail, the drawings would be more accurate and the marks I made more definite. The thread used in this sight size method of drawing should be viewed as a necessary evil, I think, and just helpful in the beginning stages.

It’s all about eye training

The point of sight size practice is to train your eye (or more correctly, your brain) to judge these relationships reliably without recourse to bits of thread and plumb lines. But constructing a drawing in this manner gets your brain used to thinking about judging the position of parts of the drawing in relation to other parts, and using construction lines to find those relationships. I believe that this makes it easier and more natural to imagine these construction lines in other types of drawing. 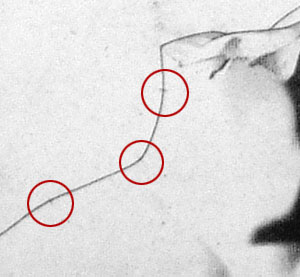 Once this furthest left point is in, I move on to the furthest right. On this drawing, the furthest point on the right is the apex of a curve, which makes life more difficult. But Bargue breaks his curves down into a series of straight lines, in order to more accurately catch the character of the curve. That helps a lot.

Despite that, there are many points on this drawing where it seems to me that a point is not clearly defined. To get round this problem, I’ve taken the liberty of marking the points definitely on the original plate, so I can see where I’m measuring from. You can see these points lightly put in with a pencil in this image.

One hour per dot

To get to this point in the drawing took around four hours, and all I had done were four dots. I have a feeling that I’m very slow at this, but I’d rather make sure that these points are right than rush ahead and have to do more corrections later. And all time I’m telling myself that, frustrating as it is, it’s building my ability to judge the relationships between points, and that this ability should translate, eventually,into all my work. 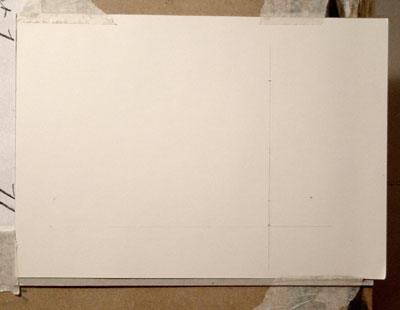 Once these four points are in and as accurate as I can get them, the hardest part is over and I can move onto finding more points on the outline, marking them on the drawing until I have a basic schematic of the foot, in terms of the large general shape. Gradually, as I follow Bargue’s schematics and refine down from the general to the specific, a foot will appear out of all these dots.