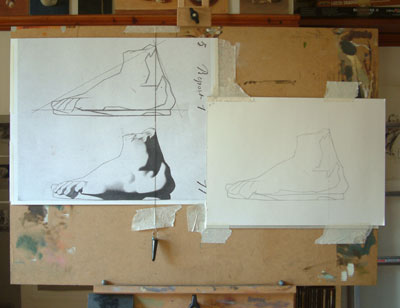 Finally, after ten or eleven hours work across several sessions, I’ve got this plate to the stage of the second schematic drawing.

At this stage, all the main points which define the drawing have been placed and joined. I can now start to get some idea of how close I’m getting with my copy. So far, it doesn’t look too bad, but I’m sure that as I move to the next stage, refining the outline, I’ll find lots of mistakes.

Getting to this stage from the last one has been a little less frustrating. Getting the first set of points in seems to take the most work. I think that this is because there’s very little to relate the points to as they go in, and they tend to be some distance away from each other. For this stage,there is almost always a few points close to the one I’m trying to get, and this makes it easier to judge the relationships by eye. The measuring doesn’t have to be quite as accurate, since corrections can often be more easily made by eye. 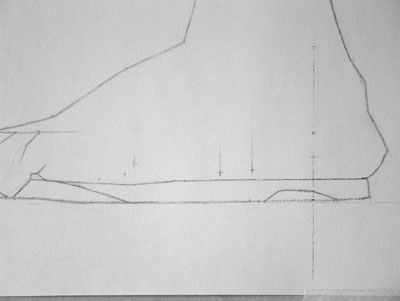 This stage was not without it’s difficulties though.

This picture shows the laying out of the first major tone block, at the base of the foot. The little crosses show where the edges of the tone block will go.

This part of the drawing is complicated by the fact that the outlines of the shape are not as clearly defined as the main outline. The tone blocks tendto have soft edges, graduating into the lights. Not having any guidance on how to approach this, I chose points on the plate where I decided that the most obvious edge of the tone block was, and measured to that.

Once the points had been chosen, marking them onto the drawing is easier. Much more now, I’m starting to find points by relating their positions to other, already existing points, using horizontal and vertical construction lines found using the plumb line.

It strikes me that this is a method which will translate more readily to drawing in the real world, and also has the advantage that it involves more judging of relationships and less reliance on pure measuring. I want to get away from measuring as much as I can (without losing accuracy of course) because it seems to me that one of the main lessons of the Bargue plates, eye training, will be more effectively learned this way.