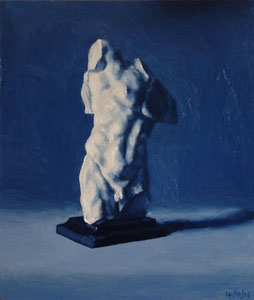 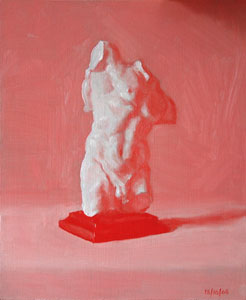 This exercise is part of my ongoing practice with tones, which started with the series of 100 still life drawings.

The general idea is to paint the same still life twice, once using only ultramarine(knocked back with a little raw umber) and white, and the second time using only cadmiumred light and white. The main difference between the two is that for the blue painting,you have pretty much a full tonal range to work with, since opaque ultramarine is almost asdark as black, whereas for the second painting, the deepest tone is flat cadmium red, which hasa mid value. This drastically reduces the tonal range you can work with for the second painting.

Since I’ve recently come to the conclusion that a painting or drawing can’t match the tonal range we see in nature, and therefore must have it’s ownl ogic of tonal relationships,this exercise seemed a perfect match for the stage I’m currently at. I’ve heard of this exercisebefore, but at the time I was still trying to match what I saw as precisely as I could. It’s taken me some time to get to a stage where an exercise like this will make sense to me.

I chose one of my casts for the subject, sitting in a shadow box backed with grey cloth, because it simplifies the task since I don’t have to deal with any local colours affecting my judgement of tone.I reckoned that this exercise was going to be quite hard enough without complicating matters withstrong chroma.

I’ve also merged the exercise with the ‘elementary tone exercise’ from Harold Speed’s excellent book,”Oil Painting Technique and Materials”. This is an old book, written in the 1920s, but is probably thebest book I’ve yet come across about the philosophy and craft of oil painting. You can get itfromAmazonfor six quid. Do yourself a big favour and get a copy.

To avoid complicating this post, I’m just going to deal with the red/blue side of this exercise here.I’ve put up another post aboutHarold Speed’s elementary tone exercise,which details his approach tobuilding up the painting, an approach I intend to use for a new series of monochrome still life paintings.

This exercise has been a real eye opener. The first thing that strikes me is that its perfectly possibleto produce as convincing an effect of light and solidity of form with a narrow tonal range as it is with awide one. In fact, I think the second painting came out better. Although some of that improvement is probablydue to it being the second stab at the same subject, the fact that I had to work much harder on relatingmy tones one to another made me concentrate much harder on what I was putting down. The net effect of that has been,I think, a more subtle painting. Much of the modelling in the blue painting on the light half of the torso is veryheavy handed. I’ve over-stated things, overdone the depth of the mid to light tones, which has given the painting amore clumsy feel. The red version, in contrast, has more gentle transitions of tone in the lights, which aremore true to the actual subject and give a stronger feeling of form.

But I also think that the cadmium red having a very strong chroma has influenced the picture, helped it tolive, almost as if the strength of the colour has made up for the compressed tonal range. 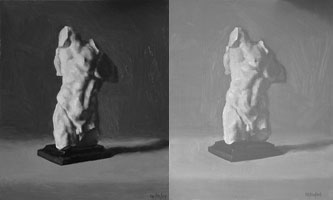 I’ve taken both photos into photoshop here, and grey-scaled them. I must admit to a certain amount of surprise at justhow much lighter in tone the red version is, lighter than it looks in the full colour version. I think that part ofthe effect of the red version relies on the strong colour, I can find no other explanation. Giving much more thoughtto this is really outside my remit right now, but it’s something I’m going to bear in mind for later on in mydevelopment, once I feel I’ve got a stronger control of relative tone.