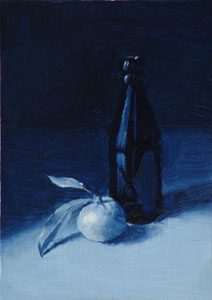 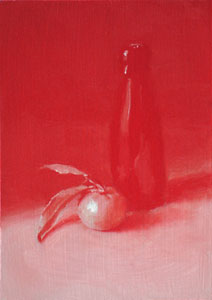 Attentive visitors will note that this is a repeat of the blue and red tonal exercise I did last weekend with my Adonis cast.

This version of the exercise is slightly more complicated, because thistime I have strong local colour to deal with on the clementine. The Adonis cast was already monochrome,so much of the work was done for me. That said, I only really have one bright colour here, the greenof the leaves being quite dull, so its really only a small step on. I plan to do one more ofthese exercises, with a range of strong colours in the subject, then I’ll settle into a series ofraw umber/white monochrome still lifes.

Another difference with this one is the inclusion of heavy chiaroscuro. I thought that thiswould stretch the red version a bit. Also I did both of these the same day, spending about three orfour hours on each one. I have to say it was a bit of a push to get them both done, I had to use everybit of available daylight now that the nights are drawing in, but it kept me fromgetting tied up in details in helped to keep the paint fresher.

As far as technique is concerned, I followed exactly the same approach as I did with the last two,the technique Harold Speed recommends in hiselementary tone exercise.This is basically a direct painting technique, using a simple medium of turps and linseed oil,which I used again on these two. I like the medium. It gives the paint a nice, flowing consistency, butI suspect that its at its most useful mixed into the paint for this kind of work. I cant imagineit being especially useful for glazing or all that fancy layered stuff.

I’m going to stick with direct painting like this for a little while. I very much want to try out othermethods, under painting, grisaille, glazing, etc, but my handling of paint is still at a very basic level, and I feel thatI’ll get more out of those techniques once I’ve become more confident and more deft with a brush. Paintingis very different from drawing in that respect. Gradually, I’m getting to know what can be done with a brush,the various ways that paint can be applied, just enough to give me the idea that there’s a lot for me tolearn here with a simpler direct painting technique before I start trying out all kinds of exotic mediums.

The conclusions I’ve drawn from this exercise are similar to those I came to after the Adonis paintings.Again, I’m amazed at the fact that the red version is as convincing a translation of light and formas the blue one. Again, I like the red one more.

I was thinking after the red and blue Adonis paintings that the red was stronger becauseof the intensity of thecolour, because the intensity in some way made up for the reduced tonal range. I’ve refined that view somewhatwith this one. I now think that its partly because of the warm/cool dynamic it sets up. As more white is mixedwith the cadmium red, it becomes gradually cooler, until you reach completely cool in the pure white highlights.This sets up a logic of warm, dark shadows and cool lights. Its something like the way a baroque picture wouldbe painted, with warm browns for the shadow areas and cool lights, except of course that in a baroque painting,(I’m thinking of Rembrandt, Rubens etc here), the shadows would be translucent and the lights thick and opaque,giving another added dynamic between the lights and darks.

I think that the warm/cool dynamic is partly what makes the deep shadows still work on the red painting.Its a secondary point, nonetheless an interesting one. This exercise today has got me thinkingmore clearly about these threedynamics – light/dark, warm/cool, translucent/opaque – and how they can be used in a picture. Ithink that the key to all of them lies in the consistency of their application within the picture. Once thelogic is set up, unless itsfollowed consistently throughout the picture, the strength of the illusion will be weakened. I plan to investigatethis further in the coming series of monochromes, together with more practice with paint handling and edges.

To start with, I’ll just be dealing with warm/cool and light/dark I think, so as not to complicate matterstoo much. I think it helps to reduce the amount of things you’re dealing with at one time when you’re learning.I’m pretty sure it hastens progression, too.

A case in point of this is the painting I did the day after these two, the same subject in colour,Clementine and Bottle. Really, it was a bitnaughty of me to be doing a full colour study right now, when I’m concentrating on value studies. But I justcouldn’t resist it. What’s noticeable about that third version, to me at least, is that I haven’t done as gooda job with the relative values as I did with these two. Having colour in the picture gave me a slew of otherthings to deal with, with the result that I took my eye off the ball somewhat with the tones, and made a fewmistakes. I enjoyed the painting, and I think it came out quite well, but I’ll be back to monochromes for thenext few. Once I’ve got some more practice in with monochrome painting, and my ability to relate tones ina painting has improved, I’ll deal with colour again. Hopefully, by that time I’ll be making less mistakeswith the tones.