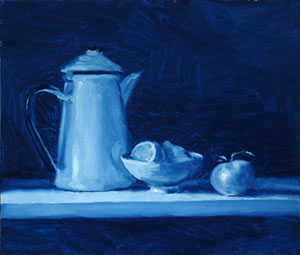 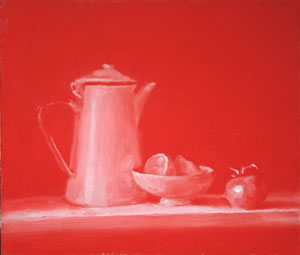 Picasso’s got nothing on me.

He only ever had oneblueand oneredperiod. I’ve had three of each already, and all in the same month too. I concede that each oneonly consisted of asingle painting, but that’s a mere technicality.

This the third and, for the time being at least, thelast of the blue/red tonal exercises.

This time I wanted to make the exercise slightly more complicated again than the last two.The first one, done from a castof Adonis, was the simplest because the cast is monochrome. It’s far easier to translate amonochrome subject into a tonal exercise. Thesecond one was a slightstep up in difficulty in two ways, firstly because I had a high chroma colour – the orange of the clementine -to translate to tone, and secondly because I did both the blue and red one in the same day – blue in themorning, red in the afternoon. They were, however, much smaller than the Adonis paintings. The Adonispaintings got a day each all to themselves.

For this one, I set up a more complicated still life subject with a blue, a red and a yellow object, plus theblack and white coffee pot to give me a tonal anchor at each end of the scale.The general idea was that having to translate a colour of each of the three commonly called primary colours,each of a different chroma (or intensity) would stretch my ability to see tone separately from colour andmean translating the two blue and red objects into their opposites, respectively. I know that blue andred aren’t technically complimentaries in the usual sense, it would be blue/orange and red green, butbear with me, I’m working with you, on this thing. I’m cooperating here. I mean opposites in terms of eachpainting.

The set up seemed simple enough; a few objects on a shelf, with a fairly strong light source (the window,I don’t use electric light for painting) on the left. As usual, it was all set up in a grey cloth lined shadow box tominimise reflected light and simplify the tones. Since we’re into winter proper now, I’m down to about sevenhours a day of paintable light, so allowing for cleaning brushes between paintings, I really only had threehours max on each of these. I had to work fast.

I’m not going to pretend for a moment that this was an easy exercise, it wasn’t. The time factor meant Ibarely had a chance to stand back and look at what I was doing, but I think it’s good to be put under pressuresometimes. The masochist in me quite enjoyed that part of it.

This being my third go at this exercise, I’m less surprised now by the fact that it’s possible to createas convincing a feeling of light with the compressed tonal range of the red version as it is with the blue.As has been the case with the previous ones, I prefer the red version. But for this one, I did change a fewthings in the red one. It being the second one, it’s difficult not to change a few things thatstrike you as out on the first version. For example, the shelf cutting the picture right across horizontallyas it does in the blue one struck me as uncomfortable. Strangely, it doesn’t bother me now.

Regardless, I’m much less concerned these days with painting a literalrepresentation of my subject, so in the red painting I let the shelf pretty much fade out at the edges of thepainting. Softening it helped the composition a bit, I think. I also prefer the way the front edge of the shelfworks. Letting it get soft and vague at the edges meant that the harder edge in the middle, below the bowl,naturally draws your eye to that part of the painting, at least I think it does. I emphasised that by bringingup the light on that part of the shelf too. I first started messing about with that kind of thing in the seriesof smallstill life drawings, and it can reallyshift the focus of the picture. It’s another example of how I’m moving away fromslavish copying of my subjects, and allowing the picture to dictate it’s own logic in how the edges are handledas much as it does in the tones. The goal is always to make a more convincing feeling of reality,but also to make a better picture too.

I was almost grateful when the light started to fade and I had to stop. I have to admit, working fast andkeeping my concentration up for the whole day, pretty much without a break, was quite tiring. In terms of thepaintings, I think the balance of tones is better in the red one, particularly on the tomato. I think the highchroma sent me a bit haywire on the blue one and I got it a bit too light in relation to the other tones in thepicture.

Like the clementine painting, I proceeded to a full colour version of this subject the next day, with what I canonly describe as appalling results. That painting was a real struggle. It all hinged around the high chroma of thetomato, it gave me a lot of trouble, and the more I fiddled with the painting to try and sort it out, the worseit got.

Eventually I had to admit defeat. But after a few days of licking my wounds, I came back to give it anothergo, spending two days on it this time. The second bash was a slight improvement, but at the end of the day thissubject was best left as an exercise. The tomato was included to force me to deal with high chroma as tone only, andin that sense it worked admirably. But it just didn’t sit right in the composition when the colour came in, and I hadto knock it right back in the second version of this painting to have it work at all.