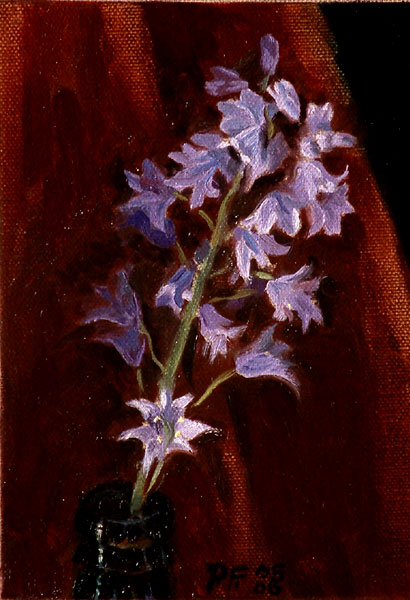 After the Cherry Blossom painting, I wanted to do some bluebells since they’re also a sign of spring for me. I wish I’d got some daffodils to paint too now, since they’re always the first sign, but not to worry, there’s always next spring.

This time I had the sense to put them in a bottle of water, so they didn’t die on me. The bottle is an old dark brown bottle from Whitby, bought on the same trip as the one in the One Green Bottle painting. Very nice, it’s going to pop up again in the next series.

Although the bluebells didn’t die on me, they did live on me. They moved very slowly, imperceptible to the eye, but towards the end of this painting, after about six hours, they had all stood up a little more, and some had popped up at the top that weren’t there when I started. I put them in at the end.

Like always, this painting is about the light. I set the bluebells up near the window, with a dark cloth behind. By the side of the bluebells, on the side nearest the window, I put a plank upright to create a kind of light box and to cast a shadow across the surface of the flowers.

All the last paintings have been lit like this, it does have a nice effect with the object coming forward out of the shadow and into the light. You can see it clearest on the Red Pepper. The cloth is also in shadow, which darkens the tone, and the bottle is in shadow too. It means that the only full light is on the closest bluebells.

The set up was exactly the same for this one as for the cherry blossom. This time I did no preparatory drawing at all, just straight in on the flowers. The first strokes to go on were mid tones of the bluebells. I didn’t use the colour checker for this, but I did keep checking the colour by putting small dabs on the viewfinder, near the bluebells. It works pretty much the same as the colour checker doing it this way. The colours aren’t isolated in quite the same way, however. I’ve been thinking about using a test strip of canvas next to the object, to paint dabs of colour on to and help with matching.

I’ve come to the conclusion though, that it wouldn’t be much different from what happens in sight-size work. The painting after this was done sight-size, which in some ways obviates the need for a checker. As you can probably tell, I’m not decided on this yet. It needs some experimentation.

I was quite relaxed about this painting. I have to make myself relax or I rush against the light. I find that the more I work from life, the more I realise that life moves. If you can’t find a way to deal with it in painting and drawing then you’re a bit screwed, unless of course you’re happy copying photos and nothing else, and if you do that you know you’re going to painter hell for your sins.

I’ve been looking at some Dutch still life paintings from the Golden Age of this type of painting, the 1600s. Often the lighting is similar to this, with (presumably) a dark cloth in shadow behind the set up to create the contrast. I’ve also been reading up on some old master painting techniques, in particular Rubens and Rembrandt. Although they had very different approaches, Rembrandt working very slowly and methodically, Rubens much faster, they treated lights and shadows in the same way.

Full light is built up of thick, opaque paint, and shadows are shown with deep translucent glazes, overlaid to give depth and warmth. Apparently Ruben’s used a quicker drying medium to allow him to do this fairly quickly.

I haven’t done that in this painting. Where the cloth is in shadow, around the flowers and around the top of the bottle, I’ve let the paint get pretty thick. The problem with this I think is that thick paint reflects light in a different way to thinned glazes and washes. Washes have depth because the light goes through them and reflects off the ground behind the paint. Shadows are like this. I’m going to have a play with glazes and washes for shadows and use opaque paint only for parts of the painting in full light for the next series of paintings.

I’ve no idea why, but for the highlights on the cloth I just wiped the paint back with my finger so the ground shows through a bit. It works though. The problem is it’s the wrong way round, with opaque thick paint in the deepest shadows, and translucent paint on the highlights. One good thing about it, though, is that now when I look at the painting, the parts of the background which work best for me are the translucent parts where I wiped the paint back. At least that means that some of it works as it should. I like the effect there, it helps the flowers to stand out more sharply.

Some sources will tell you that to achieve this glazing effect, Rubens and Rembrandt mixed medium with their paint. Whether you believe those sources or not is another matter. But I haven’t been using any medium fora while now, and when I did I just used linseed oil mixed with turps. That’s not medium, it’s linseed oil mixed with turps. Medium (as allegedly used by the old masters,) is much thicker, and gives body to the paint as well as extending the area it covers. Apparently it allows for cleaner blending of colours too.

Mostly I’m pretty happy with this one, apart from the aforementioned problems with the shadows looking too solid due to opaque paint. I addressed this problem inadvertently in the next painting, One Green Bottle. That painting was done with a medium throughout, a shop bought one by Windsor and Newton called Liquin. I used it in that painting because I was painting glass, and I wanted the paint to go on thin sometimes to try to replicate the effect of the light and shadows showing through the glass. I had another minor epiphany, this time about what medium was for and how it worked.

It’s obviously something I need to learn about if the Foxton Atelier is going to give me a thorough education. Medium recipes and experiments will be coming over the next series of ten paintings.