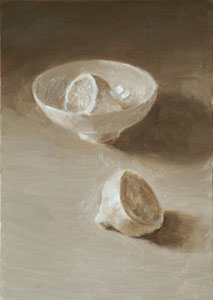 I very much liked the yin-yang effect of the two halves of the lemon in this set up,so it was a bit disappointing that I found it to be such a struggle. But as sooften happens when a painting degenerates into a fight between me and the paint and I come offworse, some good did come of it which made itself felt in the following paintings.

People like to think that paintings just flow fully formed off the end of the brushof the artist, that art is a gift from above for which the painter is simply the conduit, withlittle more to worry about than the angle at which he (or she) wears his (or her) beret and how bestto trim his (or her) beard. Well, I’mhere to tell you that’s just not the case. Firstly, women artists rarely have beards, and secondly,for a painting to work, it has to be carefully worked out and built up in an organised fashionfrom a solid foundation.

That didn’t happen with this one. It started well enough. I began as I intended by starting to lay inmy main tonal blocks, like the good Mr. Harold Speed recommends in hiselementary tone exercise.First the background went in, all appeared fine. Then I roughed in the bowl, still ok.Onto the Lemon half in the bowl. Hmmm, interesting lemon half, nice reflected light off the bowl on the bottom.I’ll just put in a little bit more toneto make it work nicer. Oooh, nice, just a bit more. Just a bit more adjustment on the bowl. Lets see ifI can get the highlight to work. Yep, pretty nice. Just a few little highlights on the flesh of thelemon. Ok, on to the other half of the lemon. At that point Irealised my mistake. I started to lay in the tone blocks of the bottom lemon half, and quickly realisedthat the surrounding tones were too light. I related the tone of the skin of the lemon tothe highlight, down a step from white, and it turned out to be the same tone as the surface of the cloth itwas sitting on. Not good,it disappeared completely. The tone of the cloth was most definitely darker than the light plane of thelemon, so there was only one thing for it, I had to repaint the background.

Now that would have been fine, except for two rather important points. Firstly, everything in a paintingrelates to everything else. Change one thing, and like as not it will have a domino effect and awhole bunch of other bits will need to be changed too. That was certainly the case here. Once I’d darkened the cloth,the bowl and lemon half at the top were much too light, relatively speaking, and had lost their weight.It just looked wrong.

Secondly, I’ve been deliberately painting the background first lately, as recommended by Mr. Speed. The advantageof this is that you can let the background slightly overlap the objects with a nice flat surface, so that when youcome to paint the objects with thicker paint, they seem to stand out in front of it with a greater feeling ofreality. The brush strokes in the background can flow behind the objects too, helping this feeling of threedimensionality. Since I’d all but finished the bowl and the top lemon half, I had to repaint the backgroundup to edge, leaving a bit of a ridge where they met. I don’t like that effect, it flattens the painting.

So, with around an hour of useable daylight left, I had to repaint pretty much the whole thing. Whatsubtlety and immediacy I had in the bowl, the lemon half and the background had to be sacrificed fora re-working of the tones. These studies are about tone first and foremost, so I couldn’t very wellsweep it under the carpet once I’d realised it was wrong.

The tones still aren’t right, relatively speaking. I really should have had the balls to scrape thebowl and lemon off entirely and start again, but I went for the mimsy tweaking approach instead, whichnever works. But, as I said earlier, some good did come out of this mistake. It reminded me of how important it isto get the foundation right first before proceeding to detail, so I put together a more deliberate process forthe next few paintings of the series. Rather than bang on about it here, I’ll refer you to the next painting,the coffee pot and conkers, which I did,for my money, a much better job of.